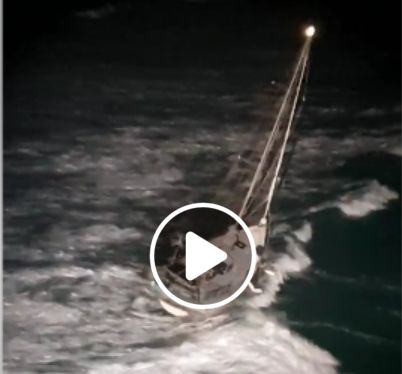 The Bundaberg-based RACQ LifeFlight Rescue helicopter has flown two men and a cat to safety, after the 38 foot vessel they were sailing on ran into trouble just after midnight.

The chopper was called to the eastern side of Fraser Island, in the vicinity of Orchid Beach, after the men put out a call for help.

The pair told rescuers they were attempting to sail from Yeppoon to Geelong, but only got as far as the Fraser Coast before one of the yacht's sails tore. They tried to start up the motor, to travel to safety, but it failed.

“Big sets were catching the boat and the rope tore to the end of its tether,” he said.

The RACQ LifeFlight Rescue helicopter was called into action by the Australian Maritime Safety Authority just after 1am.

When the chopper arrived to the scene, it was decided the men were in a safe enough position to wash into shore.

“Due to the conditions at 3 o'clock in the morning, it was too dangerous to do a winch in the dark. We decided to leave the light on them as the boat washed into the beach and just kept in communication via radio,” Shayne White said.

The chopper then landed nearby and picked up the pair, as well as their ginger cat “Soy Boy”, who'd spent the tumultuous few hours securely locked away in the yacht's glove box.

Once safely aboard the aircraft, the men told the crew they were sailing the vessel to Victoria as a favour to the skipper's daughter.

“He jokingly told us she's probably going to be annoyed when she sees it on the news!,” Shayne said.

2018 was a record year for LifeFlight for lifesaving missions with its aeromedical crews, community helicopters and Air Ambulance jets performing a record 5,724 missions throughout Queensland and around the world.