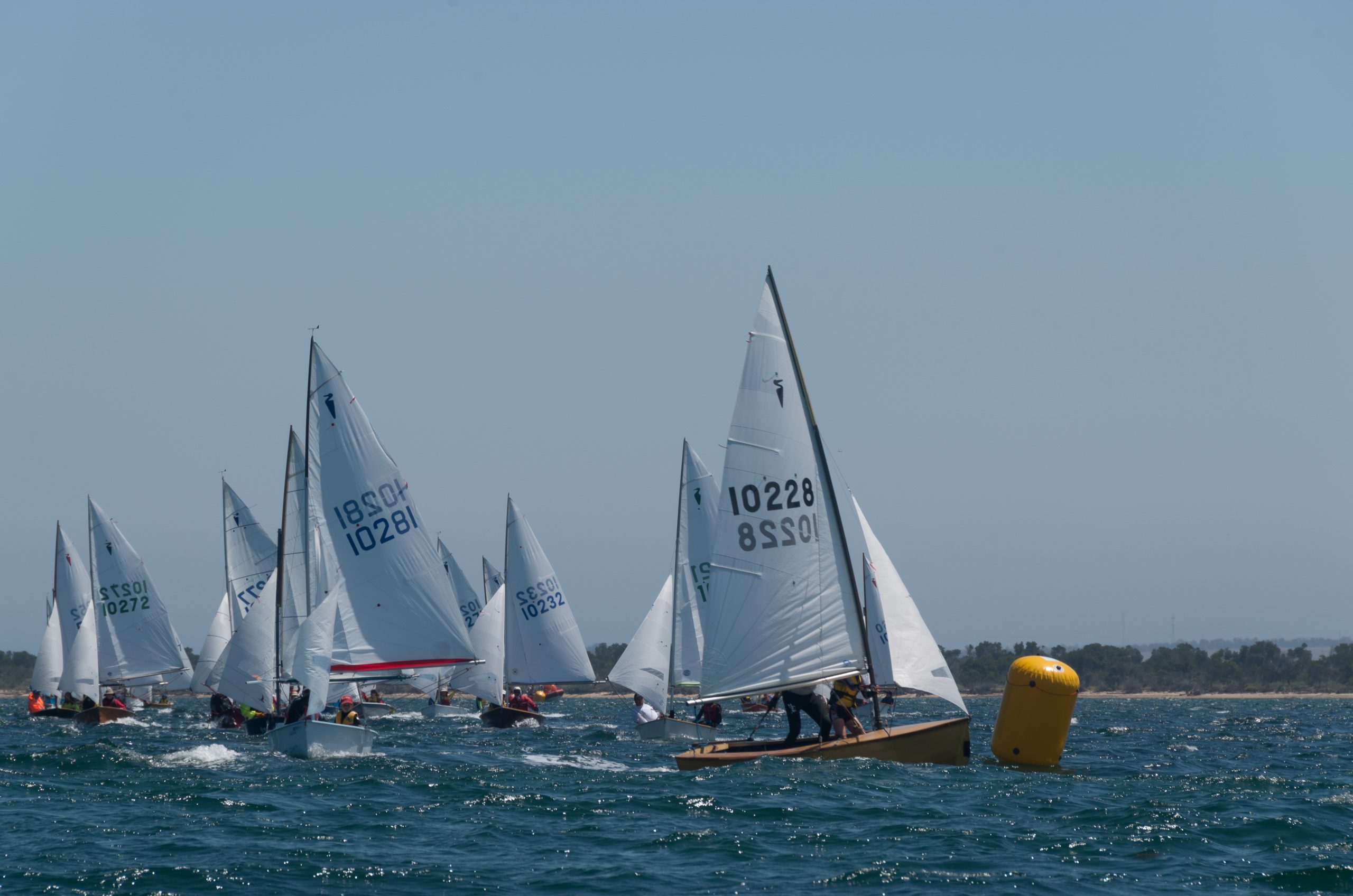 Justin and Jemima Carey sailing ‘Two Fools Fumbling’ took the honours at the 58th Heron Nationals held at St Leonards Yacht Club and Motor Squadron in Victoria between December 30th and January 6th.  For the Queenslander it had been a long time between drinks having previously won the title some 30 years ago at the tender age of 16.  Having spent the time since then developing an enviable sailing resume in other classes, Carey was lured back to the Heron fold so that he could sail with his young daughter in a boat that is ideally suited for a parent / child crew.

The ideal conditions on Port Phillip Bay were enjoyed by a fleet of 34 Herons with representatives from every State and Territory except the NT.  Although a strong local contingent willingly shared their knowledge of the tricky local tidal flows the race officer had to resort to the black flag on several occasions in order to prevent the over enthusiastic Heron fleet from letting the outgoing tide drag them across the start line before the gun.  With the exception of the two races held on day two, which were sailed in around 20 knots, the rest of the series was sailed in breezes ranging from 10 to 15 knots.  Ideal conditions for most competitors with children of various ages as crew.

Carey’s position as Heron champion was not assured until the finish of the final race, the outcome of which could have seen any one of three boats take out the title.  With NSW skippers Mark (Freddie) Phillips and Rohan Nosworthy both within one point of Carey going into the final day, the 58th Heron Nationals was one of the closest championships in the class’ history.  In fact Phillips and Nosworthy each won 3 races yet found themselves in the unusual position of ceding the top spot to a boat with a single win but with a string of second places.   The event was so close that the order of the top three boats was in doubt right up to the last work in the last race which involved a riveting tacking duel along the shore line at low water in front of the host club much to the enjoyment of the enthralled onlookers.

The event was superbly organised by the St Leonards Yacht Club and the competitors enjoyed a full social calendar to complement the excellent racing.  The organiser’s also took the opportunity of introducing a number of new awards to encourage woman and young people to take up Heron sailing.

The full results of the 58th Heron Nationals can be found at http://www.topyacht.net.au/results/2016/heronnats/nats/SGrp3.htm