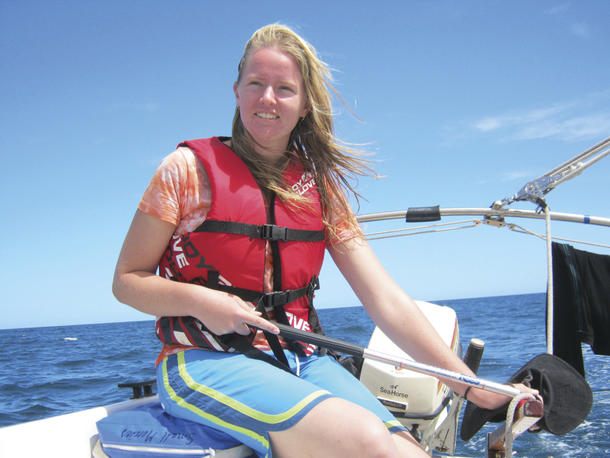 While we all dream of deep water cruising, the shallower waters and bays are cruising grounds in their own right. A trailer sailer offers a great way to explore and enjoy these places.

Trailer sailing can also be a great apprenticeship for owing something larger.  I think of our Careel 18 as a small ship rather than a large dinghy.

She is called Small mercies, a name inherited from the previous owner. I am loathe to change a name because it can be useful for tracking hulls that one has previously owned.

Like most boats she has been carefully selected after much deliberation and has proven to be a great inshore and bay and lake cruiser.

Previously, I had owned a Laser, a Heron, a Windrush 14 and then a small trailer sailer called a Cal14 (see CH August 2011). The desire to own something a bit bigger and more capable stayed with me.

The impetus to upgrade was largely my teenage son’s developing interest in sailing. Together we would pour over Boat Point looking at all the options in trailer sailers and discussing the competing features while simultaneously dreaming of cruising various lakes and bays. We were of course constrained by a maximum price and the towing capacity of our vehicles.

Another consideration for me at the start at least was the serviceability of the boat and trailer. I had previously purchased boats cheaply and then spent time and money bringing things, particularly the trailer, up to scratch. This time round I hoped to avoid too much work prior to setting sail.

We resolved that an 18 foot boat would be the best compromise in terms of towability, so the Careel designs seemed more and more appealing.

Ultimately we spotted Small mercies for sale in Melbourne. An exchange of emails established that she was one of the last of the Careel Mark 1s, was in good order and ready to sail. The sails: two jibs, a genoa and a main, were all brand new. This appeared to be the boat for us.

A road trip was mounted to Melbourne and the boat was purchased on the spot. As it happened and despite my determination get a fully serviceable combination, the trailer was in need of some minor work. However, we were overwhelmed by the charms of the boat itself. The springs and axles should not cost a lot to replace.

I have found that owning a small ship demands a different management approach and additional expense. For one thing, I considered it prudent to take out insurance which I had not previously done on any other boat.

To comply with local regulations I required an approval to operate the outboard motor on Lake Burley Griffin and a police safety check needed to be done. Upon attempting to transfer the registration I discovered that trailer brakes were required for a boat of this weight (Small mercies weighs 1080 kilograms without the outboard). I had no brook with this really. After towing the boat home from Melbourne I felt in myself that brakes were necessary, however they cost $1600 fitted along with new springs.

Once on the water though the expense seemed trivial. This boat is roomy, stable and just fun to sail.

Over the course of several excursions we have learned more and more about her.

We have also learned much about sailing itself. The self furling jib had us puzzled for some time until we realised the need to preload it. The larger boat allows us to put in reefs and heave to as well as develop our anchoring technique.

I like to maintain a logbook and this had proved a useful tool for tracking lessons learned over the two years we have owned Small mercies.

We sail on Lake Burley Griffin but have also ventured to Lake Jindabyne and more regularly to Jervis Bay. We have lived on board and sailed at night thanks to the comprehensive, no maintenance, 12 volt electrical system which powers the navigation lights. The battery is kept charged by a solar cell that is permanently and unobtrusively installed on the pushpit rail.

The boat has a chemical toilet but as yet I have not been inclined to use it. We prefer instead to plan our trips so that we visit shore side facilities at regular intervals. The ability, which only a trailer sailor offers, to anchor close to shore or even bump up on the beach greatly helps in this respect.

We have slept three on board: one adult and two teenagers, but four would still be quite feasible. The portable gas stove allows us some cooking capability. There is no refrigeration but with a little forward planning catering for a comfortable night on board is not a problem.

Our favourite spot so far is Bindjine Beach on the eastern side of Jervis Bay NSW. The water is clear and the boat can be secured to one of the courtesy moorings or even allowed to dry out on the beach when the tides are right, just do not dry out at the top of a spring tide as you might not get off again.

On a couple of occasions we have found that conditions can overwhelm Small mercies and I have been tempted to consider a couple of mods.

The self furling jib has a propensity for becoming entangled at times in strong winds, it also cannot be dropped unless it is completely unfurled which is not what you really want to do when trying to shorten sail. It would be desirable at times to have a simple jib on a halyard type system and change sails as required.

The main has two reefs but a third would be nice when the wind whips up to over 20 knots. I am considering this option.

Recently we found ourselves near Point Perpendicular with a freshening NE wind and a metre of sea. Our intention was to peep outside and look up the coast. Due to the aforesaid problems, we instead found ourselves having to douse the main and run down wind to shelter near Bowen Island under outboard power. The sea was boisterous and prudence dictated a retreat but the seaworthiness and stability of the boat were never in doubt.

While some may think it overkill, I have installed an EPIRB on Small mercies and also carry a handheld VHF radio that can recharge on board. The handheld is OK for the inshore work that we do and has the advantage that you can take it with you if you need too.

I have also acquired an additional Danforth type anchor. This has proved useful for anchoring off a beach but close enough in to wade ashore.

While not suited to crossing oceans Small mercies is a true cruising boat. We have been to places not everyone gets to and can live on board in reasonable comfort for short durations.

If ever we upgrade to a keelboat then the lessons we have learned cruising inshore and inland will be of much benefit too us.

Now where is that chart of the Whitsundays?