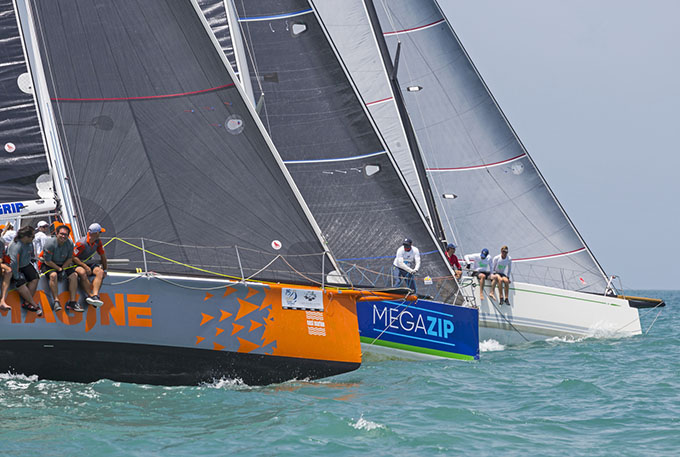 Close on the IRC 1 start. Photo by Guy Nowell.

PHUKET, Thailand – Over 450 sailors, families and friends from more than 20 countries are set to make Cape Panwa Hotel their home this week as they head to Phuket to take part in the Cape Panwa Hotel Phuket Raceweek, 17 – 21 July. The kick-off event for the 2019/2020 Asian Yachting Grand Prix, Raceweek is set to welcome top sailors from around Asia and beyond, and charterers from as far-a-field as Australia, China and the UK, to compete in four days of high octane racing off Phuket's southeast coast.

Going head-to-head in IRC Racing 0 this year are two TP52s – Team Hollywood (ex Provezza) and East Sail (ex Team Hollywood). Having been crowned AsianYachting Grand Prix champion last season, Ray Roberts and his Team Hollywood will be looking to get their new season's campaign off to the best of starts this week. A mixed crew of international sailors on East Sail, however – many of which will be competing for their first time at the regatta – will be looking to make life difficult for them.

In IRC Racing I, last year's winner Aquari (Craig Nicholls) will be lining up alongside another Sydney 40, East Marine Emagine (Scott Bradley). They are up against some tough competition in the form of another past winner, the Corby 36 Jessandra II (Andrew McDermott), and the well campaigned MegaZip sailing with an all Russian crew.

Neils Degenkolv and his crew on Phoenix return to defend their IRC Racing II title and aim to extend their three-year unbeaten run. Looking to upset that record is the “new” Eastern Creek Karts skippered by Raceweek regular, Michael Spies, as well as the Farr 1104 Farrgo Express, who was regularly on the podium last year, and the 25-foot Platu Dragon.

This year's largest class is set to be the Cruising Monohull Class. Racing neck-and-neck throughout last year's regatta, BeauX Esprits and Lady Bubbly are both back with Lady Bubbly looking to go one better this year. They are up against Linda, Chinon, Venture, Atlanta – who returns after a few years hiatus – Kantus Bride, representing Cape Panwa Hotel, and Lola and Sumalee which is chartered by a crew from China.

The all-carbon racing trimaran, Bonza (ex Fugazi), is back with a new name and owner in the Multihull Racing class. They are up against the new Fugazi, a sports cat helmed by Dan Fidock, two Stealth catamarans from the Asia Catamarans yard – Phantom V and Twister 2 – as well as This!, DaVinci and the all-new Sho,Vel skippered by Zam Bevan.