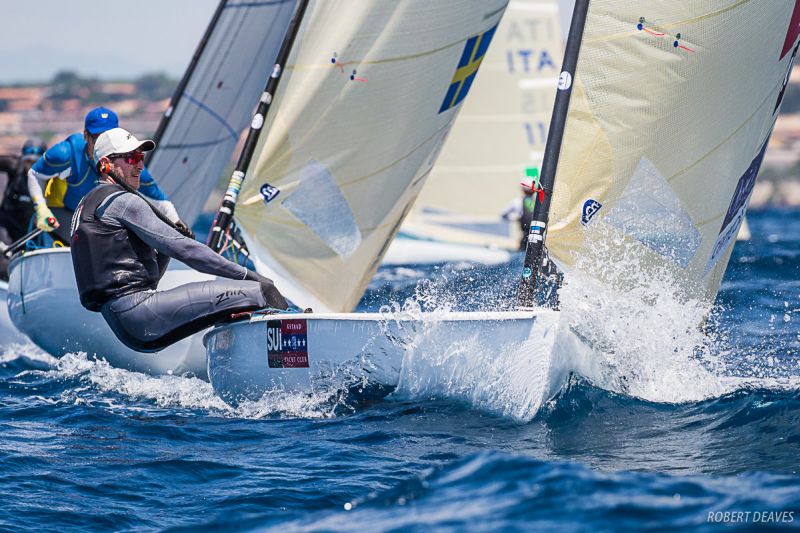 Nils Theuninck, from Switzerland, leads the U23 Finn World Championship, for the Finn Silver Cup, after the event got underway in Anzio, Italy, on Tuesday in fantastic sailing conditions. Former winner, Oskari Muhonen, from Finland is in second while James Skulczuk, from Britain is third. The three race wins went to Muhonen, Skulczuk and Joan Cardona, from Spain.

Anzio turned on the glamour for the first day of racing with three great races to test the young Finn fleet. With a hot 10-12 knots rising to 15-18 knots, and with some great waves and clear blue skies, the championship could not have got off to a better start. Some sailors were too keen though with seven starting penalties throughout the day, which could prove crucial later in the week.

The 2017 champion Muhonen, dominated the first race, leading out of the right to hold the lead the whole way round. Cardona and Theuninck were close behind and chasing, but had their own battle and finished in that order.

A big left shift on the first beat on Race 2 favoured the British sailors Callum Dixon and James Skulczuk. Dixon rounded with a nice lead and extended downwind to hold a huge lead at the second top mark. However it ended there when his rudder blade sheered off and he had to watch the whole fleet sail past. Luckily one of the coach boats had a spare and he was able to sail the next race. With Dixon out, Skulczuk sped away downwind to win from Theuninck and Muhonen.

By the final race, the sailors were becoming tired and this showed in the huge spread on the final downwind, with more than half the leg between the professionals at the front and those at the back. But even the professionals were complaining of tired limbs after a full day free pumping. Taavi Valter Taveter, from Estonia, was the early leader, holding the lead until the second lap when Cardona came past. Johannes Pettersson, from Sweden recorded his best race of the day with a third place finish.

Muhonen said, “The first race was pretty good for me. We had good speed and good length from the start and I managed to hold on to the lead the whole race. It was a bit lighter in the first one, maybe 12-14 knots and then the wind picked up through the day.”

“The whole day was pretty good conditions with sunshine, big waves and big breeze, so we’re pretty happy. The second race I was on the wrong wide, so I had a lot of catching up to do, and the third, I was so dead already after a fever a few days ago, so that was bad,” he said with a laugh.

Muhonen came straight to Anzio with another title under his belt, having won the 2019 Summer Universiade.“Last week I won the Universade in Naples. We were pretty happy to come out with the win in that but it was keelboat racing, so doesn’t really make a difference here. This week will be much harder racing.”

For Skulczuk, his race win was his first in international competition and it meant a lot to him. Part of the GAC-Pindar British U23 team that is managed by the British class association, he is frustrated that decisions outside his control have left him with a lack of options to continue his career in Olympic sailing.

“Conditions were really good today. Downwind surfing was really good. Race 2 went really well with a win for me, but unlucky for Callum with a broken rudder.”

It is his final year as an U23. “It’s my first international win so feels really good, especially to do it here at the U23 worlds. Looking forward to tomorrow’s conditions. Not really sure what to expect, but hopefully the same as today with the glamour conditions.”

“I have a few big plans in the next couple of months, one of them being the Fastnet Race, a gateway into yachting and professional sailing, so I think that should be good and looking forward to that when I get home from here to get the training in, especially the night sailing.”

“Due to the Finn being dropped, my Olympic dream has been smashed as I am around 98 kg and it means I won’t really be able to sail any other Olympic dinghy, and it’s a massive shame just as I was starting to gain the skills at the international level. I’ll never know where I could have gone in the future with Olympic sailing. It’s a great shame.”

Theuninck is the world No 15 and still hoping to qualify for Tokyo. He has been in the class just under two years and points out that he still has 10 months to go to the final qualification event. With the learning curve he has been on so far, he stands a very real chance of achieving his goals.

He scored a 3, 2, 4 today to lead after the opening day. “Glamorous sailing conditions in Anzio, and we did three races in big winds. It was a lot of fun. I am happy with the day but still a lot to improve.”

“This might be the last real Silver Cup, if might say, because after Tokyo, there won’t be the Finn in the Olympics any more and a lot of young guys won’t want to sail the Finn because there will be no outcome for the Olympics. For myself the big dream is to win a medal at the Olympics in the Finn and I feel like I am making progress every year, and if it stops after next year it’s a big shame.”