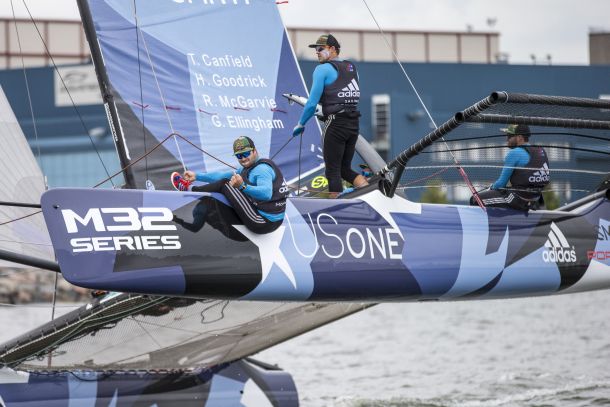 Three qualifying races and three final races completed Sunday’s final of the M32 Battle of Helsinki. The rain clouds stayed away from Hernesaari and the wind kept blowing all the way through. After the three first races the top-4 continued into the final races while Alite Racing, Essiq Racing, Hydra Sailing Team and Team GAC Pindar finished the weekend in ranks 5-8.

The winners on Sunday were Team US One. Skipper Taylor Canfield, Hayden Goodrick , Garth Ellingham and Ricky McGarvie sailed a consistent regatta and made fewer mistakes than the other teams. The victory in Helsinki was the team’s fourth in a row in the M32 Scandinavian Series and the team will be sealing its overall win in the final event of the tour in Stockholm next weekend.

Second on Sunday was the Danish team Trifork skippered by Jes Gram-Hansen. They ended up first in the day’s opening race followed by a third and seventh plus an impressive 3-2-1 in the final races for double points. This gave the Danes a fourth place overall in Helsinki.

Joining Team US One on the podium for the Battle of Helsinki were two Swedish teams, Rahm Racing and Wallén Racing. After four days the gap between the experienced compatriot skippers, Mattias Rahm and Hans Wallén, was less than two points.

Finland’s Thomas Johanson’s first experience in the M32’s was throughout positive. Johanson praised both the boat itself and the operations on the water: “I have seen the Olympics and the Volvo Ocean Race, but never experienced this good action by the race committee. Fantastic job.”. The final score for the Finnish-Danish team in Helsinki was seventh.