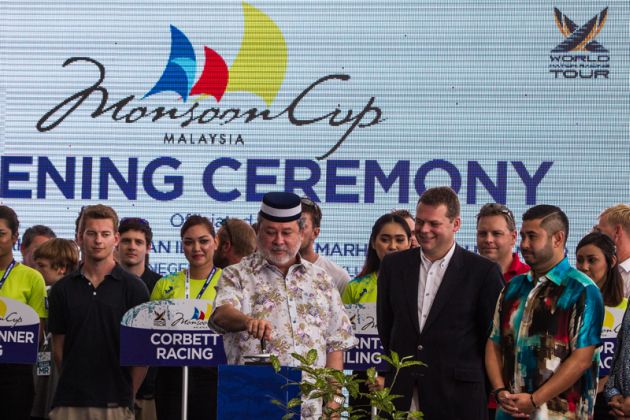 Johore Bahru, Malaysia (25th January 2016): “This week, all eyes of the sailing world are on Malaysia to see what happens at the Monsoon Cup.” So spoke Tucker Thompson, voice of the America’s Cup, at the opening ceremony of the Monsoon Cup in Johor Bahru earlier today.

Hundreds of visitors attended the ceremony, to watch the motorcade arrival of His Royal Highness Sultan Ibrahim Ismail Ibni Almarhum Sultan Iskandar, who is a keen supporter of the Monsoon Cup.

The 12 international sailing crews were introduced to the audience as the Sultan unveiled the ornate Tunku Laksamana Johor Trophy for this week’s regatta, the finale of the World Match Racing Tour 2015.

Sailing teams have been spending the past two days getting as much practice time on board the FarEast 28R keelboats, which no one has match raced before. World Champion from two seasons ago, Taylor Canfield (ISV), finds himself in a three-way fight for the overall World Championship title against Bjorn Hansen (SWE) and arch-rival Ian Williams (GBR).

Canfield could do little to stop the Williams and GAC Pindar juggernaut in Johor a year ago, when the British skipper won the Monsoon Cup and seized the world crown back from Canfield. Williams was unstoppable in the bigger, five-man Foundation 36 keelboats, but Canfield fancies his chances in a new, smaller four-man boat like the FarEast 28R. “Adapting to the new boats will be hard for all the teams this week,” said the US One skipper, “but it’s going to be tougher for other teams like Williams than it is for US One. We like it when it’s harder because I think we’re one of the teams that adapts more quickly to new challenges.”

The young Virgin Islander has also taken on Bill Hardesty as his tactician, the same role that Hardesty used to perform for Williams. “We’ve got his tactician, so we know all Williams’ tricks, and this week we’re going to pull out some of those tricks on him,” laughed Canfield, always keen to take a jab at the five-time World Champion when the opportunity arises. With his practice for the day already finished, but the hot tropical breeze blowing hard through the Straits of Johor, Canfield was keen to watch his British rival going through his paces in the gusty winds. “I’m going off to watch Ian Williams wiping out!” he said with an evil grin. The mind games have begun. But tomorrow the talking stops and the action begins.

Follow all the action on LIVE streaming from 26-30 January at www.wmrt.com or livestream.com/worldmrt

For the latest standings and scores on the 2015 World Match Racing Tour leaderboard, go to http://wmrt.com/result/leaderboard.html.