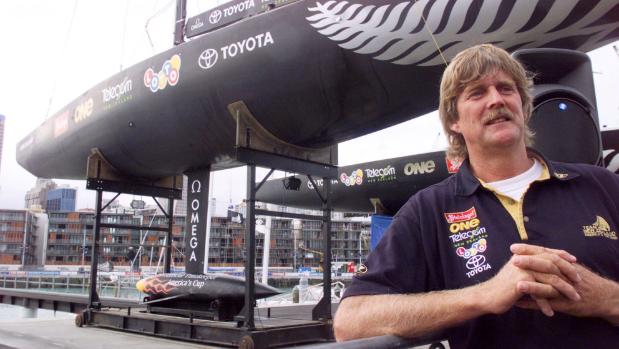 Team New Zealand syndicate head Peter Blake stands in front of NZL 60 the boat took on Prada in 2000. The old Cup Village used to host that regatta is no more. Photo Reuters.

Beginning with Fremantle in 1986/87, hosting the America's Cup has changed the face of venues for the better. The shabby port city in Western Australia was transformed, with dowdy and dangerous pubs restored to their former glory and a new cafe culture established.

It was the same in Auckland for the 1999/2000 Cup. Viaduct Harbour, the smelly little fishing boat area of Auckland and its surrounding industrial wharfs became the social hub of downtown, with bars, restaurants, cafes and apartments springing up. But it appears that this development has left little room for the team bases and some in Auckland are querying whether the city has the capacity to host another series:

Aucklanders caught up in the excitement of this week's sailing glory will be hopeful their city will soon be confirmed as the hosts of the next regatta. But questions remain around where such a massive event would be based, given the repurposing of the city's previous Cup Village, and more importantly who would pay the hefty price tag with the city straining to meet day to day needs.

In tiny Bermuda, a small island was created as a site for their America's Cup village and historic hotels renovated and more accommodation built. Experts put Bermuda's investment in the event at around $77million – the question for Auckland is where is that kind of money going to come from?

Mayor Phil Goff said the city was extremely proud of the win and would welcome the next regatta if that was what was decided. But with the city battling to meet the demands of infrastructure and housing, Goff said there was not a lot of money to be thrown around for an event.

“We have got a $27b infrastructure deficit in the next 10 years and that is a significant deficit… that is where my priorities have to be,” he said.

Goff said he expected roundtable discussions between major players, sponsors, central government and the council to take place sooner rather than later.

Whoever forks out for the next regatta, the likely venue is at this point tipped to be the City of Sails, but things have changed since 2003. Auckland's Viaduct Basin is now apartments, hotels and a lively food and drink scene, replacing the old syndicate bases. A new home for the competing teams will need to built and a new race course planned out.