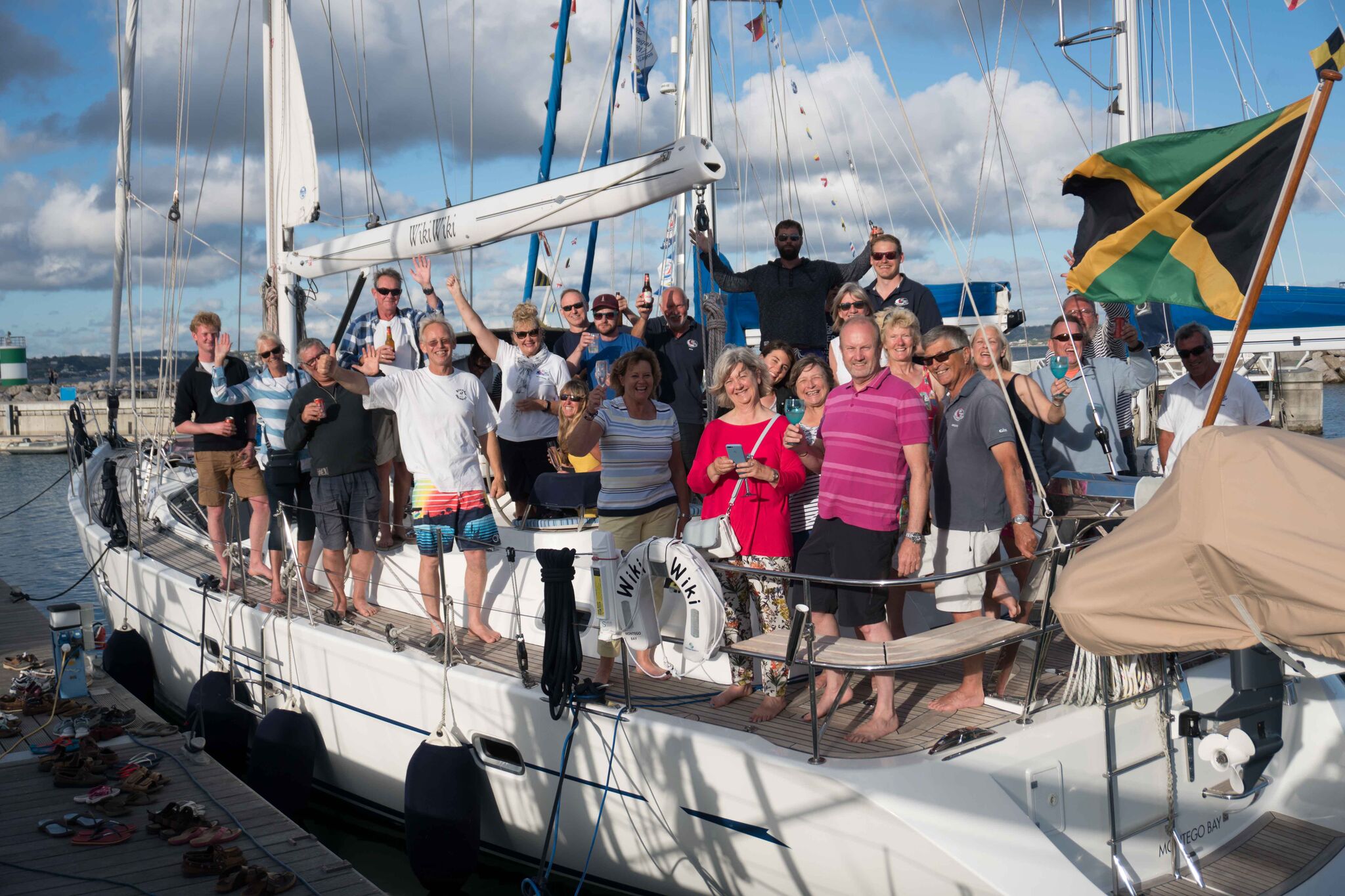 05/07/2017
It is one month to the day since crews of the 2017 edition of ARC Portugal gathered together at Mayflower Marina in Plymouth, eagerly awaiting the latest weather forecast which would dictate their departure across the Bay of Biscay to officially start the rally sailing to the sun. In the end, a run of unseasonal low pressure systems forming in the Atlantic resulted in the fleet sitting tight in UK waters to wait for a weather window, before finally casting off to Monte Real Club de Yates in Bayona, Spain from Falmouth on 11 June.
The seven day delay was the longest in the rally's history, but their patience was rewarded with an uneventful Biscay crossing in pleasant sailing conditions, fishing triumphs and plenty of wildlife encountered along the way. Many of the crews described the sail around Cape Finisterre to be the highlight of the longest leg of the rally – “It's been the best sail I've ever had.” said Paul Wade from Hallberg Rassy 48 Blonde Moment as they reached the dock, “We were accompanied by pods of dolphins and downwind sailing in the glorious sunshine with a refreshing 30 knots of breeze!“
With the Biscay crossing completed, crews of the 20 rally yachts relaxed to enjoy the stopover itinerary, revised to accommodate the delay. ARC Portugal has run annually for over two decades, and in that time World Cruising Club has fostered excellent relationships with the stopover ports en route who warmly welcomed crews to each marina. From Bayona, the rally visited seven different ports on the Portuguese coast, day-sailing in between Povoa de Varzim, Porto, Figueira da Foz, Peniche, Oeiras, Sines and finally Lagos.
“My favourite stopover was Sines.” said Alexander Korotkov, sailing his Jeanneau Sun Odyssey 45, Atwa, “A small Portuguese town that really gave me the opportunity to experience the Portuguese way of life. Drinking wine, eating fish, and watching the world go by.“
Other highlights included historical tours, a Tuk Tuk rides through the old town of Porto, and sociable evenings ashore with seafood a plenty!
Crews on this year's ARC Portugal have also formed some firm friendships over the last four weeks; travelling together as a rally they have shared experiences both on and off the water, making the trip to the Marina de Lagos even more memorable.
“We were relatively new to sailing before we started this rally and this was our first big trip.” said Tom and Emily on Beneteau Oceanis 38 Neverland. “We really are so grateful to the fleet for sharing their knowledge and boosting our confidence in sailing. We have made some unforgettable memories and lifelong friends.“
By chance, as well as sailing, music has been a common passion of several of the crews with brothers  Mike and Marty from Sweet Harmony and Colin from Serafina of Maldon sharing their immeasurable talents on guitar, accordion and vocals along the way. They provided a soundtrack for the rally at dock party gatherings, much enjoyed by their fellow crews, and a headline set performed at Saturday night's prize giving which concluded the rally for another year.
Ingrid Fortunato, Marina Manager at Marina de Lagos, was delighted to welcome the rally yachts once again and presented plaques at the prize giving dinner.
“The whole team at Marina de Lagos always look forward to the arrival of ARC Portugal. The event was originally started to help promote the opening of Marina de Lagos back in 1994 and here we are 23 years later with a rally that continues to attract a great number of yachts. This year was particularly special as I stood on the dock welcoming back many boats and crew who have previously kept their yachts here. It's been wonderful to hear that so many yachts are planning to continue their cruising. For those staying in Marina de Lagos we look forward to getting to know you over the coming weeks, months, and years.“
Whilst all those involved with ARC Portugal in 2017 will be sad that this year's rally has come to an end, it is also just start of many more exciting experiences for owners and crews. Some boats are planning to continue cruising into the Mediterranean, across the Atlantic, and even round the world, whilst others will be using Marina de Lagos as a convenient base to further explore Portugal. Gary Clements, owner of Southerly 110 Arcarius of Plymouth, will base the boat there for a year.
“I found that while keeping my yacht in England I was often weather bound or sailing in conditions I didn't enjoy. With the boat at Marina de Lagos, I can fly cheaply and regularly down to Faro and can enjoy the all year round good weather. For me it was a no-brainer.”
Wherever their adventures take them next, the friendships between the crews and their memories of their sail south together are set to last a very long time. Ian and Westa Hopkins from the rally's only catamaran, Broadblue Rapier A'r môr dirion summed up their first WCC cruising rally experience. “The support from the World Cruising Club team and all the participants made us feel as though we were part of a family. The mixture of different backgrounds and cultures, all sharing the same dream, has been truly special to be part of.“

Entries for the 2018 edition of ARC Portugal will open in September 2017, and World Cruising Club will be hosting a special seminar on “Cruising in Portugal” alongside the Southampton Boat Show on Saturday 23rd September. Practical weather, training and safety advice will be discussed, particularly for those who may be planning to cross the Bay of Biscay for the first time. Special focus will be given to the ports visited as part of ARC Portugal and suggestions for about further local cruising and the practicalities to consider for basing your yacht in Portugal after the rally. The session is free to attend with advanced registration – click here for more information and to sign up.