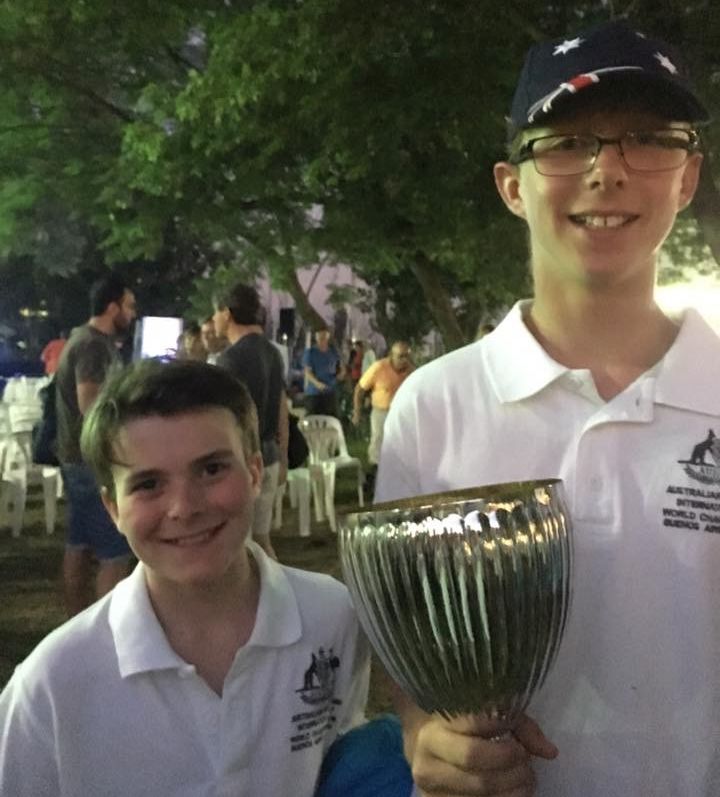 Well the World championship is over. The new world champions are Jamie Harris and Antonia Wilkinson from GBR. Congratulations to them from all the Australian team.

The last day was a our best by far. We were able to get two races in, the first was sailed in 2-4 knots with just enough wind to get the boats moving. Alyssa and Mitch Kelsey sailed very well to score a 5th placing to cement their position as top scoring Australian boat, but a lot of competitors failed to finish in the time limit in the marginal wind and roaring tide, despite a shortened course, some actually sat metres from the line not moving as the clock ticked away.

The wind then swung and settled down to a easterly from the shore and built a bit. This meant for the first time we had a sailable breeze with flat water. The race committee was kept very busy keeping up with the fickle direction as the wind slowly clocked more into the south. These conditions were much more comfortable for us and whilst not a light air team most had their best race. Fynn Sprott and Laurence Jeffs scored a fantastic second place after leading around the first mark. Well done guys!

After the sailing we towed the kids in and the boats were packed up quickly and delivered back to the Argentinian builders. Then the prize giving began and the usual swapping of clothing was frantic. The Australian caps were a much sought after commodity. The only team rule we have on the clothing swap is you keep all clothing that have the coat of arms emblazoned, that is to be cherished.

In the prize giving we featured well with Charlie Goodfellow taking out best under 15 helm. He with crew Toby Legg sailed a good regatta and Charlie has a great future ahead of him, he is only 13 and a real talent and a great kid, well done Charlie!

Charlie and Will Zeeman won the most improved over the course of the regatta, and they typified our team effort. Struggling to come to terms with the frustration of sailing in a unique environment and unfavourable conditions, they and all the team pushed through and learnt, adapted and improved. At no stage did anyone drop their heads and give up.

So many people to thank, Francisco Consentino was a real boon, helping me as fellow coach and someone I can now call a friend.

The parents and supporters we had here were amazing with their support and enthusiasm. I cannot thank you enough.
To the sailors, my little band of Aussies. It was a pleasure to coach you and I gained so much inspiration and personal motivation from you seeing you deal with adversity. You are one and all a fantastic lot and despite not getting the results you strived so hard for, you can be very proud of how well you represented your country, your clubs, your family and most importantly yourselves.