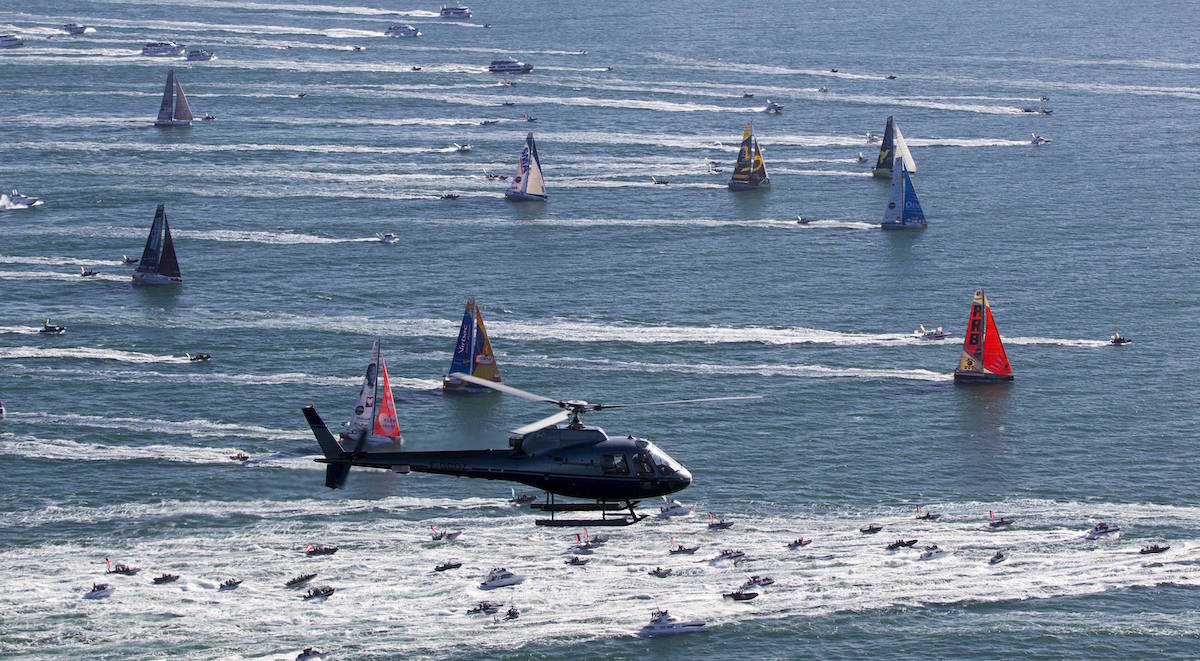 Skippers in the IMOCA class will be seeing a lot of different places in 2018, as noted by the different events on the calendar and in particular the fine program scheduled in the Mediterranean.

The pinnacle event in 2018 will be the Route du Rhum Destination Guadeloupe, which starts from St. Malo on 4th November. With 10 months to go to the big day, this headline event, which will be celebrating its fortieth birthday, is already attracting a lot of interest.

Cargo ship Kingfisher arrived in Lorient with seven of the 13 IMOCAs that took part in the 2017 Transat Jacques Vabre, so all of the competitors are now back in their respective home ports. The boats are now entering the yard to prepare for the 2018 season, which looks like being very busy, which is something that can only delight the skippers.

The season to open in Douarnenez
It will be in early May in Douarnenez in Brittany that the IMOCAs will begin this new race season, when they take part in the Guyader Grand Prix.

Just two days after this event ends, those skippers who so wish can line up on 9th May for the start of a solo race between Douarnenez and Cascais (Portugal), which will be a qualifier for the Route du Rhum. This will be a good opportunity to get hold of the precious ticket early in the season.

This race course will also be a literary voyage in partnership with French publisher, Gallimard. An author will be paired up with each of the skippers taking part, which should mean that there will be some fantastic tales about this maritime adventure.

A rich program in the Mediterranean
In the first week of June, the IMOCA skippers will be back together again for another long-awaited event, this time in Monaco, details of which are due to be presented later this month. The idea is to come up with a genuine Mediterranean race programme with the 60-foot monohulls lining up after that in the Giraglia Rolex Cup between St. Tropez and Genoa, via the Giraglia Rock.

In between, there will be stand-by periods scheduled in Toulon or La Ciotat and then in Cannes. The locals down there in the Mediterranean will therefore have an opportunity to meet the sailors and admire their boats on their home ground.

Back in the Atlantic and the English Channel
The next events will take place further north. The start will be organised on 23rd July of the Dhream Cup between La Trinité-sur-Mer and Cherbourg with a rounding of the famous Fastnet Rock, offering a 736-mile race course to the IMOCAs.

This race will also be a qualifier for the Route du Rhum. That will be followed by Cowes Week and the Round Britain and Ireland Race. Then from 20th to 23rd September, the Azimut Challenge will take place in Lorient (Brittany) offering a full dress rehearsal before the major event on the 2018 calendar.

It all comes to a climax with the Route du Rhum
To round off the busy 2018 season in the best way possible, the IMOCAs will be setting sail in the legendary Route du Rhum, Destination Guadeloupe. The starting gun will be fired off St. Malo on 4th November with the finish in Pointe-à-Pitre (Guadeloupe).

Twenty places have been reserved for the IMOCAs, fifteen of which have already been taken up. This confirms the enthusiasm surrounding this event, where the standard looks likely to be very high for those wishing to follow in the footsteps of François Gabart, the winner of the last edition in 2014.

A year to go to the Barcelona World Race
In just a year from now, on 12th January 2019, the IMOCAs will set off in the Barcelona World Race; the double-handed round the world race. A new Notice of Race has been published confirming the new race format with two legs: Barcelona-Sydney and Sydney-Barcelona, with the possibility of changing co-skippers in Australia.