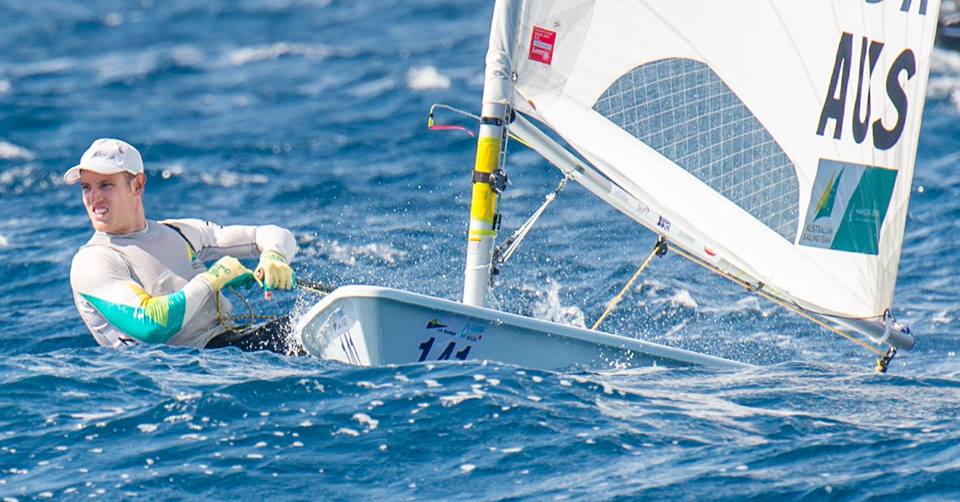 Matt Wearn at the Laser Worlds in Split. Photo ILCA.

(Split, Croatia) – Fears of wind coming from all directions on the second day of ‘Finals’ at the Laser Standard Men’s World Championships were unfounded when a westerly breeze developed just after noon. All three fleets were sent afloat to another new course area 3 miles from Split harbor in front of island Čiovo. In the gold fleet, three races were completed. The silver and bronze fleets that could not start races in yesterday’s conditions, finished two races today.

Racing got underway an hour later in a 12-14 knot wind, with big waves and a strong current flowing West, after just one general recall.

Nick Thompson GBR was first to round the windward mark, followed by Pavlos Kontides CYP after they chose the left side of the course. Both had already suffered two bad races so were going flat out to maximize their advantage. Their downwind sailing was an exhibition of Laser sailing at its best, as they went hunting for the waves that would give them the fastest ride to the downwind mark. Thompson made a better round and managed to gain back a couple of boat lengths which he held up the next windward and downwind legs until Kontides caught the last wave at 4 boat lengths from the mark, only to steal the inside berth for the last reach to the finish. Kontides went high and Thompson went low biding his time. At 15 lengths from the last turning mark before the finish, Thompson found his wave and rode out from underneath to regain the lead and take the finish gun. Chris Barnard USA sailed behind into third, securing one of his best races of the series.

In the second race, the wind freshened and shifted slightly to the right. Kontides had another solid first windward leg to round the first mark ahead of Jesper Stalheim SWE and Jean-Baptiste Bernaz FRA. Kontides extended his lead downwind which he held comfortably to the finish with Bernaz behind, after passing Stalheim on the second downwind. Behind Stalheim the Australian duo of Matthew Wearn and Tom Burton were having their own battle where Burton won to finish fourth.

The wind continued to turn another 10 degrees right for the third race as the sun sank lower in the sky. The fleet split evenly up the first windward leg and the leaders came from both sides of the course with some new names in front and some familiar names further back. Wearn rounded first just ahead of Michael Beckitt GBR, Stefano Peschiera PER, Jeremy O’Connell AUS, Elliott Hansen GBR, and Philipp Buhl GER. Kontides was back in 17th but on fire whilst the normally consistent Bernaz was back in 40th position. Beckitt passed Wearn on the downwind and continued to stretch his lead as Buhl moved up to second at the finish. Kontides chipped away places to the finish including a brilliant pass on the short windward leg to the finish, stealing 5th place from Wearn.

With two races left to sail, Kontides goes into the last day with a 15-point lead over Tom Burton. This would normally be sufficient to take the title. However, the weather gods may still have a say as a fast-moving frontal system is expected to move across Split sometime on the final day. If it arrives early, anything can happen including no sailing!