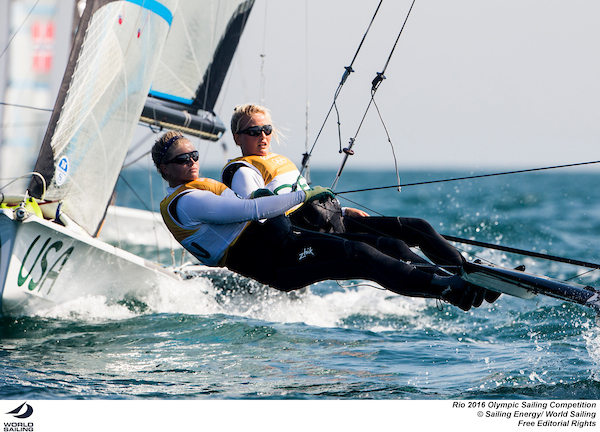 At London 2012, legendary New Zealand media man and “the voice of sailing” Peter Montgomery was standing next to me at the 49er medal ceremony. Australians Nathan Outteridge and Iain Jensen had won the Gold before the medal race was sailed, as they were more than 19 points ahead of their young Kiwi training partners, Peter Burling and Blair Tuke. The Kiwis, in turn, had the Silver in hand before the medal race.

Montgomery turned to me and said, “I'm really pleased with Peter and Blair. They're angry they got Silver. Too often we Kiwis will settle for the minor medals.”

These two Kiwis certainly weren't settling for anything but Gold. They have been unbeaten in every major regatta since London and today they turned the Olympic tables on the Aussies. They go into Thursday's medal race with the Gold secure, fully 34 points clear of Eric Heil and Thomas Ploessel of Germany, with Outteridge and Jensen in contention for Silver as they are just three behind the Germans.

On Olympic debut, the 49erFX is set to deliver the most exciting medal race of the Games. There are four crews within a single point of each other, meaning it's a straight final – whichever of those four crews beats the other three will win Gold.

This will be a great race as covering, boat-on-boat duels and other tactics we often see in medal races will be of no use. It will be a drag race with winner taking all.