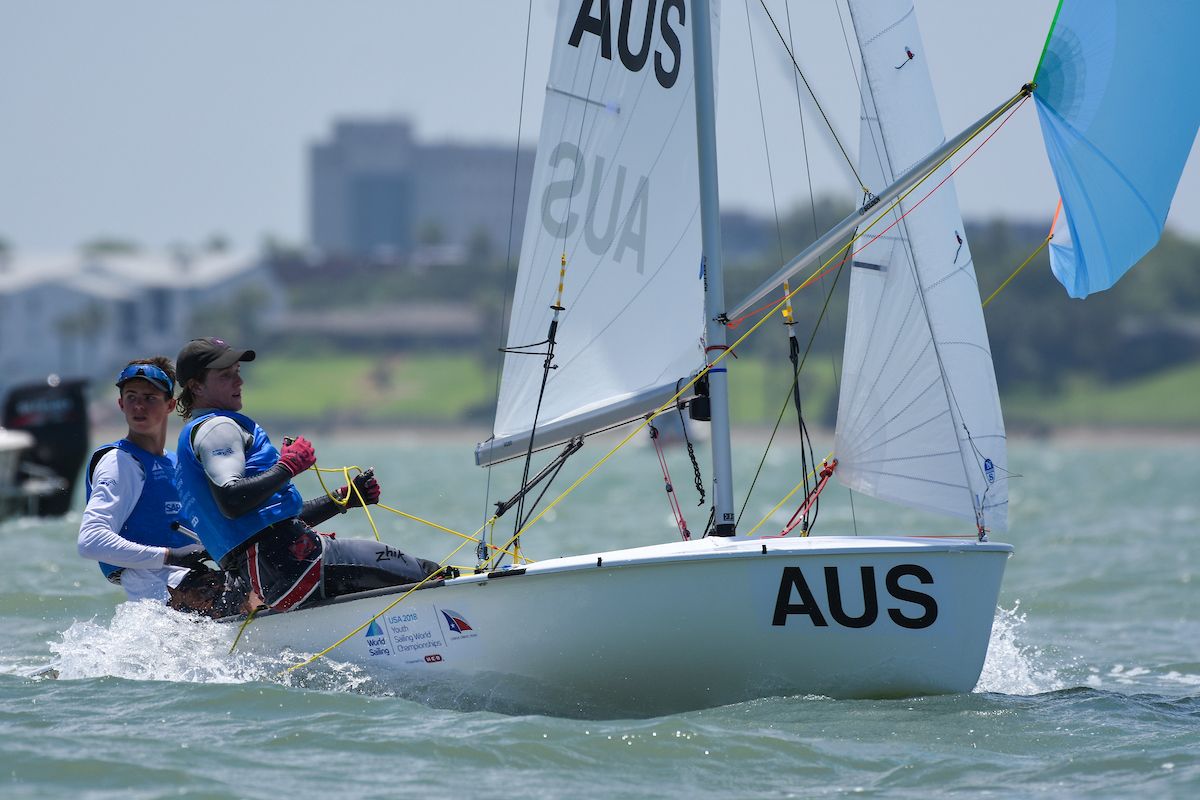 Otto Henry and Rome Featherstone at the 2018 Youth Worlds.

The third Youth Olympic Games, to be held in Buenos Aires, Argentina, between 6-18 October 2018, will welcome 100 sailors from 44 different nations.

The Nacra 15 will race in one fleet, with up to 12 opening series races and one final race.

In the Techno 293+, the first race of the opening series will be a fleet race. Following the first race, either a fleet or slalom single elimination series race will be held.

All fleet races will race in one group and each slalom race will be divided into four heats with semi-finals and finals to decide who gets maximum points from that race. The final race will be a fleet race, featuring all the competitors.

The Twin Tip Racing Kiteboarding, however, will include up to 24 qualifying races, with a heats-based system eventually determining which four athletes will progress to the final. The racecourse will also contain several obstacles as an extra challenge for the kiteboarders.

A host of qualification regattas across all five events were held to help dictate which nations would compete at the Youth Olympic Games. Places were awarded to the highest performing nations in the World Championships of each class before a series of continental qualification regattas across six regions took place. Host, Argentina, was automatically awarded a spot in each class.

No fewer than eight medal-winning athletes from this year’s Youth Sailing World Championships, held in Corpus Christi, Texas, USA, will be competing in the Youth Olympic Games, including three World Champions.

Nacra 15 sailors, Teresa Romairone/Dante Cittadini, stormed to Gold in Corpus Christi by an astonishing 36 points, dominating the fleet with just onefinish outside the top five throughout the competition.

The Argentine duo will be sailing on home waters at Buenos Aires, with Cittadini also selected as his country’s official flag-bearer at the Opening Ceremony.

Islay Watson (GBR) is the other 2018 Youth Worlds gold medallist participating at the Youth Olympic Games. In a competitive RS:X Girl’s fleet, the British windsurfer won three out of her last four races to claim the title by two points. In Buenos Aires she will be racing on the Techno 293+ and will be joined by some tough competitors.

Veerle Ten Have (NZL) and Giorgia Speciale (ITA) shared the podium with Watson in Texas and they will both be aiming to claim the Girl’s Windsurfing fleet in Buenos Aires.

Seventeen year-old Ten Have, who took the silver medal at the Youth Worlds, has had a busy few months – she also made an appearance at the Hempel Sailing World Championships in Aarhus, finishing 52nd overall out of 62 sailors.

Speciale, meanwhile, picked up Bronze in Corpus Christi, finishing 23 points ahead of fourth-placed Palma Cargo (CRO), who will also race at the Games. The Italian heads to Argentina in good form, with a recent 2018 RS:X Youth European Championship title under her belt.

Her compatriot, Nicolo Renna, is the sole male RS:X Youth Worlds medal-winner to be making the trip to South America. He won silver in Corpus Christi, 12 points ahead of third place.

World champion, Geronimo Nores, won’t be at the Youth Olympic Games, but his younger brother Manuel (USA) is part of the Techno 293+ line-up in Buenos Aires. Similarly, the younger sister of Youth Worlds bronze medal-winner, Fabien Pianazza, Manon, is amongst the Girl’s Windsurfing pack.

Concluding the 2018 Youth Worlds podium representatives are silver medal-winners Andrea Spagnolli/ Giulia Fava (ITA), who will be taking on Romairone/Cittadini in the Nacra 15 fleet.

Elsewhere, some of the brightest young names in Kiteboarding will light up the water as the discipline makes its Youth Olympic Games debut.

The winners of the 2018 Kiteboarding TwinTip: Racing Youth Worlds completely dominated the regatta. Both Deury Corneil (DOM) and Nina Font Castells (ESP) ran riot to claim a winning total of just four points each, and they’ll be eager to recapture that form on the global Olympic stage.

And there were several teenage competitors at this year’s Kiteboarding TwinTip: Racing World Championships in Italy, with many of the Youth Olympic Games representatives tasting success.

Tomasoni qualified for the Youth Olympic Games via the Africa and Europe Qualification tournament in Dakhla, Morocco, in February this year, where Toni Vodisek (SLO) also snatched a place in the Boy’s event after a tight battle with France’s Benoit Gomez.

Elsewhere, Jingle Che (CHN), who became Asia’s first Kiteboarding World Champion in 2017 at the age of 16, finished first in the Asia/Oceania Kiteboarding Qualifier regatta in March this year to seal her spot at the Games.

From the two previous Youth Olympic Games, held in Singapore in 2010 and China in 2014, a host of participants have gone on to compete in the London 2012 and Rio 2016 Olympic Games.

Additionally, all 31 sports are also represented by Athlete Role Models, who will provide support in a mentoring capacity throughout the competition.

Taking on the task for sailing are Rio 2016 Nacra 17 gold medallists and Argentine nationals Cecilia Carranza Saroli and Santiago Lange; Lange himself is from San Isidro, the very heart of this year’s Games.

Windsurfing racing begins at 12:00 local time (UTC-3) on Sunday 7 October, with the Kiteboarding and Nacra 15 events following suit at the same time on Monday 8 October.

Windsurfing will then finish one day earlier on Friday 12 October, before Kiteboarding and the Nacra 15 wrap up on Saturday 13 October