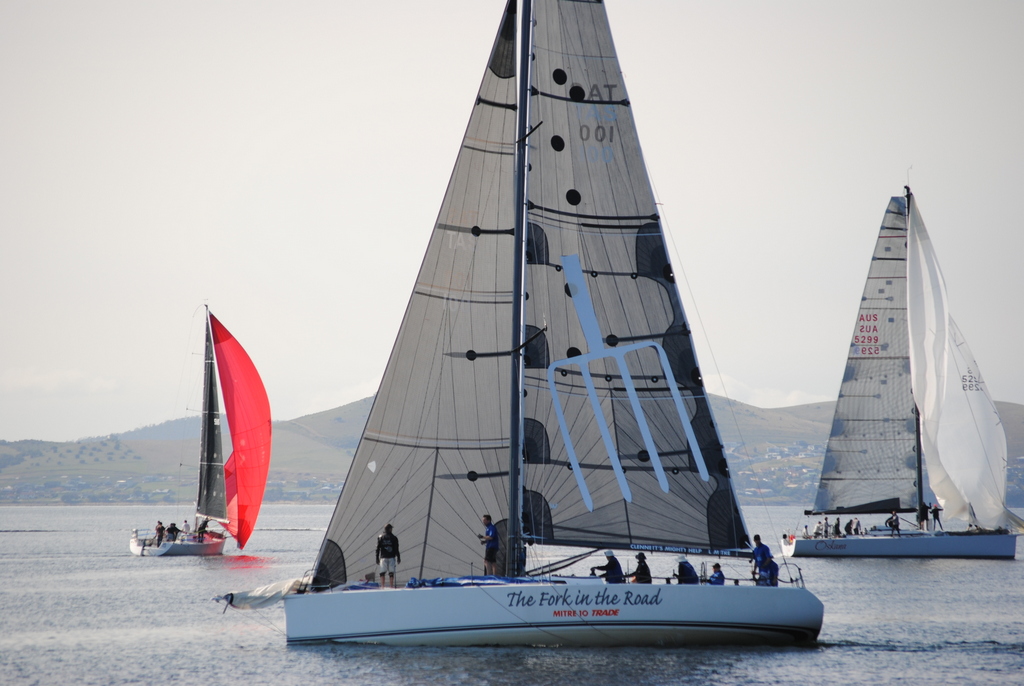 The Fork in the Road was running late for the start but still took line honours. Photo Peter Campbell.

Whistler, one of Tasmania’s most prolific long race winners, today began another season on a winning note, taking IRC and AMS handicap honours in the Channel Race, the first event of the summer season.

Traditionally run by the Royal Yacht Club of Tasmania on the day after the colourful Opening Day of the Sailing season, the Channel Race attracted a quality fleet of 22 yachts for the 20 nautical mile race down the Derwent to the D’Entrecasteaux Channel and return.

On corrected time, Whistler won the IRC category by a comfortable 10 minutes from Filepro (Tim Gadsby), third place going to The Fork in the Road.

The winning margin was even bigger under AMS scoring with the placings the same.

At the top of owner/skipper Aplin’s racing program is to contest the Melbourne to Hobart Westcoaster this year followed next year by the 75th Sydney Hobart.

Despite being late for the start by several minutes, Gary Smith steered The Fork in the Road through the fleet and overtook Oskana on the return leg from the Channel, taking line honours by just over two minutes.

With the Combined Clubs encouraging yacht owners to obtain IRC rating certificates, the RYCT calculated IRC results for three of the four divisions of the Channel Race.

The small sports boat Whoop De Doo, an Elliott 7 skippered by Tom Macdonald, won the strongly contested Division 3 on PHS scoring from Footloose and Barcoo (John Cole-Cook), the recent winner of the Cock of the Huon.