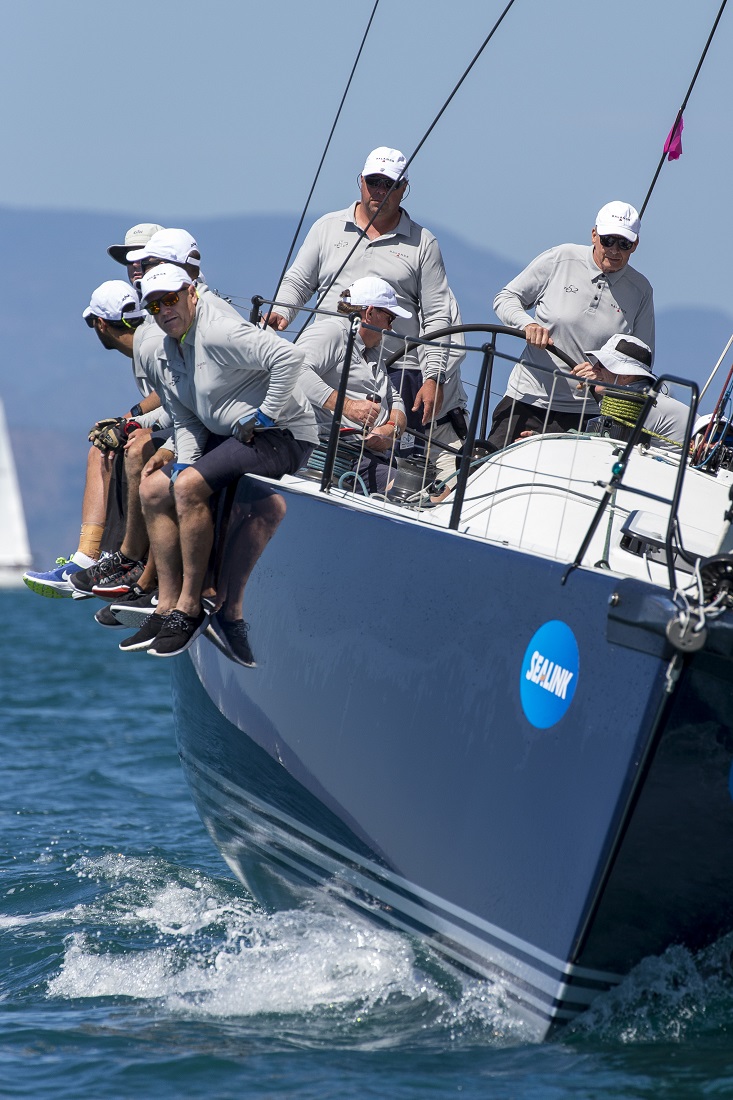 They say if you love something you should set it free, and if it comes back it’s yours – and so it happened with Bob Steel and Quest – the valuable TP52 has changed hands backwards and forwards between ‘The Man of Steel’ and Paul ‘Money Man’ Clitheroe.

The yacht has served both equally well – and is back in the hands of Steel – or is it?

“How funny is the recent Balance/Quest change,” mused Paul Clitheroe this evening.

“Bob Steel sells Quest to me four years ago – she becomes Balance. Then last year she is Balance in the Ocean Pointscore and Quest for the Hobart.” And so it has gone.

“Now she’s really is Quest again. Bob bought her back, but he’s away, so today I was on board with our combined crew for the OPS Race. It was a fast one!”

“I’m trying to pass the reins to Bob, so brought along a quiet crew member – Greenie (Mike Green),” he says, tongue in cheek. Green was aboard for all the above races and aboard Steel’s previous Quest when it won the 2002 Hobart. He was also aboard Andrew Strachan’s 47ft Ninety Seven when it took line honours in the testing 1993 race.

One of the best in the business and the sailing master for both owners for some years, Green has a rather no-nonsense personality and is intent on winning. On the other hand, Clitheroe is just the opposite – ‘what will be, will be, but let’s enjoy ourselves’. It makes for some funny moments and is reminiscent of some old TV comedies featuring two blokes.

“Greenie skippered today and she went like a rocket ship. It was Quest’s ‘first’ OPS race and we won everything,” a pleased as punch Clitheroe said.

Green agreed. “And I didn’t have to abuse him once – it was great. It was like nothing had changed,” he said laughing.

The TP52 took the quadrella – line honours and IRC, ORCi and PHS wins. In the latter three, they beat the ‘King’ of OPS, Julian Farren-Price, the winner of a record nine OPS Series’. Today, the Sydney jeweller had to settle for second with his updated Cookson 50.

However, Steel’s co-owner in Quest, Craig Neil, better known as the owner of Elena Nova, was aboard. Greenie confirmed: “He had a ball. The boat was like a rocket ship, we got it cranked up to 20 knots.

“We went really well. We beat Julian home by about 10 minutes. We were on fire. It was the perfect breeze strength for us 19-20 knots, perfect in the gusts, around 23 knots – a great ride – but a bit bumpy coming through the Heads on way back,” he said after they completed the course in two hours 34mins 27secs.

Green and a combination of the two crews, including Adam Brown, have recently been sailing on one of the latest additions to the TP52 tribe, Gweilo, owned by Matt Donald and Chris Townsend.

Today’s race did not impede on Gweilo’s campaign, as she is doing the Audi Blue Water Pointscore, while Steel has opted for the Mt Gay Ocean Pointscore.

Of returning to Quest with the same Quest-Balance-Quest crew combo today, Greenie said, “Nothing’s changed except the decal. If ever there was a smooth transition, this was it.”

Having sold the Mat 1180 he launched in 2015, Steel was getting itchy sea legs and wanted a boat to sail and do Wednesday afternoon’s with his mates as he revs himself up for something bigger next year.

“He wants to do 75th Hobart with mates. I’ll do it with him,” says Green, who was left speechless when Steel handed him the second Rolex timepiece he won (for the 2008 Hobart win).

“We’re both getting towards the end of our Hobart careers,” said Green, who will do his 40th Hobart this year on Gweilo.