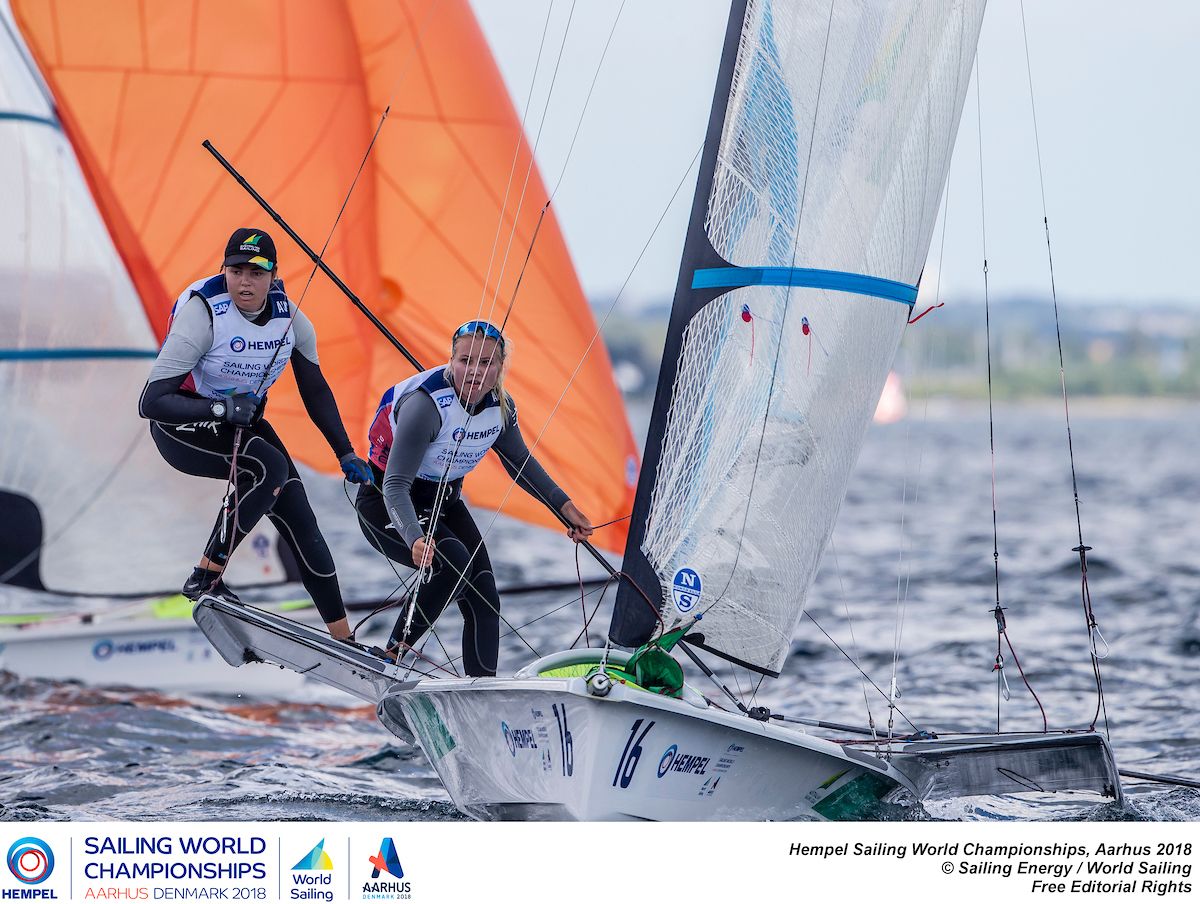 Giant Swede Max Salminen drove home his advantage in the eye of the storm in the Bay of Aarhus on Wednesday to win the last race of the day in the Finn class and establish a potentially decisive eight-point lead for medal race tomorrow.

A hot and humid day seven at the Hempel Sailing World Championships Aarhus 2018 saw us coming to the business end and some of the big names are rising to the occasion, but there are some notable absences from the top 10 qualifying for the medal race.

The 29-year-old Salminen, who won gold in the Star class at the London 2012 Olympics, was sixth after moving to the Finn in at the Rio 2016 Olympics and won his first class world championships in the Finn last year. He will have enjoyed the final downwind in the lashing rain – arriving 20 minutes ahead of the forecast – as the wind jumped from single digits to 23 knots, gusting 30.

But the top six are all in with a realistic chance of winning in the winner-takes-all medal race, where points count double. Four points separate Hungary’s Zsombor Berecz, New Zealand’s Josh Junior, Canada’s Tom Ramshaw and the Dutch rivals Nicholas Heiner and Pieter-Jan Postma (fourth and sixth respectively).

There will, however, be no Jorge Zarif, the Brazilian, who just missed out on a medal in Rio and has been the dominant force in the Finn this year. He has had a disastrous last two days. America’s Caleb Paine, the bronze medallist in Rio, had looked well set after sixth in the first race of the day, but a 33rd place in the last race left him 12th.

The same fate nearly befell Great Britain’s Ed Wright. At the start of the day, Wright, had a seven-point lead on three sailors close behind.  With the potential for no races in the light airs that kept them on shore for most of the day, he was looking at a healthy lead going into the medal race tomorrow. A 27th and 19th place put paid to that and almost saw him miss out completely.

Denmark has no-one in the top 10, but the Finn will be followed very closely by a knowledgeable home crowd in tomorrow’s stadium race. It is the class their Olympic legend, Paul Elvstrøm – who won four Olympic golds – made his and Denmark’s own in the 1950s and 1960. Danish sailors have won the Finn Gold Cup ten times.

Great Britain took under that mantle under their own colossus, Ben Ainslie, and then Giles Scott. But the absence of the Scott, the Olympic champion and four-time winner of the Finn Gold Cup (the world championships), away on other projects, has seen others rise and Salminen will be seeking to prove that it is his and Sweden’s time.

There were fewer surprises in the men’s 470, who completed the final race of their gold medal fleet series today. The Swedish 2018 European Champions, Anton Dahlberg and Frederik Bergström, could only manage eighth place and saw their lead cut to six points over two chasing crews. They are in touching distance of their first world championship title but will have their hands full watching Japan’s Tetsuya Isosaki and Akira Takayanagi, who finished second yesterday. France’s Kevin Peponnet and Jermie Mion are third, but level on points with the Japanese.

All three will have to be careful that they do not get so wrapped up in their own battles that they let Australia’s Mat Belcher and William Ryan, the silver medallists at the Rio 2016 Olympics, slip past. The Australians could only finish tenth and are 13 points behind the leader, but if anyone knows how to win a medal race it is Belcher, who won gold at the London 2012 Olympics, and the 2011 World Championships in Perth and 2014 World Championships in Santander.

Laser
The fleet could only manage one race and will to race once more tomorrow on the reserve day to finish the series ahead of the medal race on Friday. Pavlos Kontides, who became the first-ever Olympic medallist for Cyprus (in any sport) with his silver at the London 2012 Olympics, is leading after finishing second. Australia’s Matthew Wearn is three points behind, able to discard his 15th place today, and his compatriot, the Rio 2016 Olympic champion, Tom Burton is a further two points back. New Zealand’s Rio bronze medallist, Sam Meech, the long-time leader, slipped further back with 13th today and is 13 points off the lead. But the last race tomorrow could still change everything.

Laser Radial
The fleet could only manage one race and will to race twice more tomorrow on the reserve day to finish the series ahead of the medal race on Friday. In difficult and shifting conditions before racing was abandoned, there were some big double-digit scores at the top of the leaderboard. Just one point separates the top three. Leader Paige Railey (USA) finished 37th out of the 60 boats and third-placed Anne-Marie Rindom, Denmark’s Rio 2016 bronze medallist, 44th. The flying Dutchwoman, Marit Bouwmeester, lies fifth, 19 points behind the leader. But no one will be writing off the woman who won gold at the Rio 2016 Olympics and the 2011 World Championships in Perth and 2014 World Championships in Santander.

Women’s 49erFX
Austria’s Tanja Frank (the Rio 2016 Olympics bronze medallist in the Nacra) and Lorena Abicht were serene in the rapidly shifting winds and fortunes as others in the leading group faltered. They finished top overall after winning the last of the first three races in the gold fleet with three to come tomorrow.

Australia's young team of Tash Bryant and Annie Wilmot have put together a low-score regatta so far, and their consistency moved them up from seventh to second as other crews faltered.

“We’re really happy with our day,” Bryant said. “It was really tricky conditions so we just tried to keep consistent and just chip away at as many boats as we could. We didn’t have the greatest of starts, but we managed to work our way through the fleet and we’re really pleased with how we went.”

Wilmot said: “Technically, we still haven’t sailed our drop yet, so I think there’s not a whole lot of pressure going into tomorrow and we’ll just try our best and sail as hard as we can.”

The pair, who have been working this year with Australian Sailing’s 49erFX coach Javier Torres – who coached the Brazilian FX crew to a gold medal at the Rio Olympics – had their first taste of a medal race at the World Cup Series event at Hyeres earlier this year and are keen to improve on that experience.

Local favourites, Ida Marie Baad Nielsen and Marie Thusgaard Olsen started the gold medal fleet races today 10 points ahead overall, but a penalty turn on the first upwind left them near the back. They managed to finish 18th in the 30-strong field, but lost the lead it was a sign of things to come as they slipped to fourth overall.

49er
The first race was abandoned no racing was possible. They made it in just as the storm front hit the Bay of Aarhus.

Men’s Kite
All three spots in the Men’s Kiteboard remain the same as yesterday.

Max Salminen – Sweden – Finn (leader)
“I’m tired after today, but it’s a huge relief to qualify my nation and go into the medal race as the leader.

“I can see the Olympics in my vision. It’s nice to have a chance to defend my World title after a long week. So far, the competition in my fleet has been great and it’s a shame that we’re missing Giles Scott.

“It’s always good to have a buffer, especially on a tricky race like this, but there is not much of a game I can play – I just have to sail my best.”

Josh Junior  – New Zealand – Finn
“It was pretty rough in the end. We went out there and had about 7-8 knots all day and right at the last turning mark we got a squall of about 40, which is almost double the racing limit. I went from sixth to 20-something and I’m pretty gutted about it, to be honest. It was a tough day but I’m still in the hunt so happy with that.”

Pavlos Kontides – Cyprus – Laser
“I’m feeling good. I had a good race and I’m leading. I am confident in tomorrow races, if we get any. I still don’t have a big discard, so I can keep my focus on the medal race and double points.”

Matthew Wearn – Australia – Laser
“It’ll be nice to race tomorrow and get another opportunity to make some points up. Quite a lot of waiting today on the water. First race was abandoned, and the second race was an okay race for me.”

Sam Meech – New Zealand – Laser
“[A 13th] would be OK but, unfortunately, the people who I need to be in front of did really well in the race. If I didn’t have a bad race yesterday, I would be more than happy with that.

“It’s not quite where I wanted to be. We still have one more race tomorrow so there are a lot of points on the line. I will try to get myself back into a good position before the medal race.”

Tanja Frank and Lorena Abicht – Austria – Women’s 49erFX (leaders)
Frank:
“We’re not really trying to count the points because the girl’s fleet is just half way through. We have a full new day tomorrow and we are just looking forward to racing again.”

Natasha Bryant / Annie Wilmot – Australia – 49erFX (second)
Bryant:
“We were chipping away with all the boats today – it was really tough race course, so we were just trying to make sure that we didn’t have any issues.

“We’re happy with the way today has gone. It’s one of our first gold fleet races and we’ve only been in the class for a year now, so we are pushing hard. Everyone around us is so good.

When they were told that they are second overall:
Oh wow! That’s a surprise! (laughing) That’s exciting. I’m sure the points are really tight.”

By Matthew Pryor, with additional material from Australian Sailing