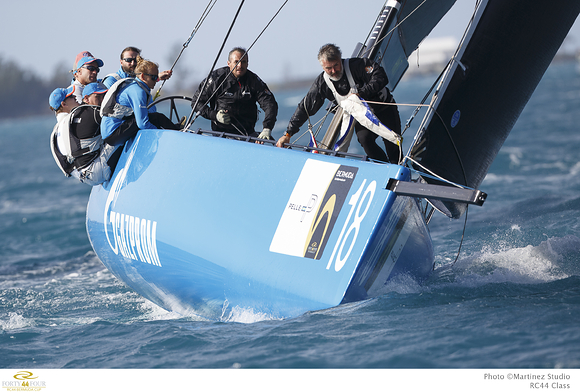 For the first round of the RC44's 2016 championship, Bermuda today demonstrated exactly why it is a perfect venue for next year's America's Cup. On day one of the RC44 Bermuda Cup, there was sun, flat water and around 20 knots of wind, gusting into the high 20s by the close of play on Bermuda's Great Sound.

Coming from winning the 2015 RC44 Match Racing Championship, Vladimir Liubomirov's Bronenosec Sailing Team again put in a top performance, through good boat speed, excellent tactics, near flawless crew work, but also with sheer dogmatism, allowing them to score two 'come from behind' wins. As a result the Russian team came close to being unbeaten, only toppled in the final flight against Artemis Racing after a jammed halyard prevented them from hoisting their spinnaker on the final run.

“We were very happy with the day, because we almost won all of them,” explained Italian tactician Michele Ivaldi. “A lot is down to crew work and being the same team for many years, especially with the trimmers – that is our strength. Today was one where you just needed to sail the boat around the course cleanly.”

Despite scoring the most wins today, Bronenosec was the guilty party in a pre-start collision with Peninsula Petroleum Sailing Team during the first cross of the first race of their season for which they were docked two points.

Vladimir Liubomirov was pleased to have won so many races, but was less pleased about the collision: “It was our fault, but from my point of view it was easy to avoid. So that is minus two for us, and we are now on three points, so we are just one point behind.” The collision caused a crack in Bronenosec's port topsides, which is being repaired overnight.

Three boats – Team Aqua, Artemis Racing and Team Nika – all finished the day on four wins and, after some complex countback mathematics, it was Chris Bake's Team Aqua that ended up coming out on top.

Team Aqua's tactician Cameron Appleton was proud of their performance. “It was proper match racing, awesome. The guys worked hard and did a flawless job. In every race we led at some point.”

The 'match of the day' was the first of Flight Two between Torbjörn Törnqvist's Artemis Racing and Alexander Novoselov's Katusha. The latter, on which Andy Horton calls tactics, planted a penalty on Artemis coming into the start line, 'but, it was the Swedish team that led around the race track.'

Coming into the line it was marginal that Artemis Racing could make her penalty turn before Katusha finished. In the event, during their turn the mainsheet became trapped around one of the wheels causing them to lose steering.

Katusha's Horton explained: “We were coming in at 20 knots and they were parked. We made a last minute, throw-the-helm-over, full speed, spinnaker up, ripping along crash gybe. We got to within about 10cm from them – it was like coming in and doing a hand brake turn into a parking spot. We just whipped out and then we hit the pin end of the line and we dragged that.” Despite this calamity, the umpires ensured Katusha won the point.

Artemis Racing tactician Francesco Bruni admitted. “At least they saved the boats. We were happy that the boats didn't crash.”

Despite this incident, Artemis Racing owner Torbjörn Törnqvist said he enjoyed the day, the racing taking place a stone's throw from his America's Cup team's base. “It was maybe a distraction! I was looking at it from time to time, but not really. Today it was as good as it gets with the lagoon and flat water and wind.”

While his team has a base in Bermuda, this is the first occasion Törnqvist has ever visited the island. “It is a fantastic setting with this huge lagoon and flat water. It is great to see the surroundings – it is beautiful.”

Ultimately six of seven flights were sailed before, with the wind gusting up to 30 knots, PRO Peter 'Luigi' Reggio ended the day sending the eight RC44s back to their dock off the Royal Bermuda Yacht Club.

Tomorrow will be the first of four days of fleet racing at the RC44 Bermuda Cup with a first warning signal scheduled for 1200 local time. Follow the racing via the live blog at www.rc44.com.