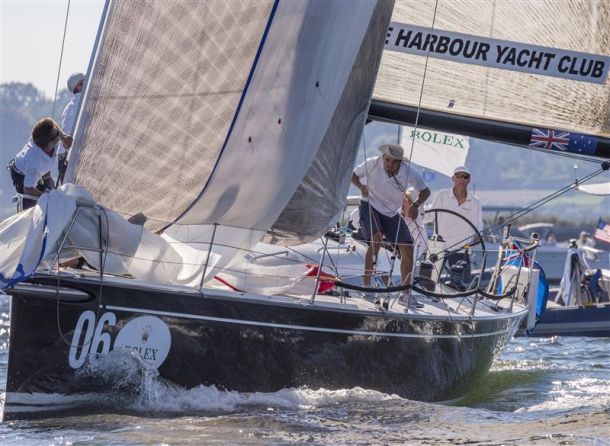 The morning air reverberated with the sound of cannon fire and boat horns as the international fleet, battle flags flying, paraded around Newport harbor and past the main dock of the New York Yacht Club where supporters were gathered to cheer them on for the final day of the 2015 Rolex New York Yacht Club Invitational Cup.

This traditional sendoff for the competitors is just one of the many details that make this event so special. Over four editions, 21 countries have gone head-to-head on the water and then made lasting friendships during social gatherings at Harbour Court, New York Yacht Club’s iconic waterfront clubhouse in Newport. As with the heritage of the sport, woven into the very fabric of this event is the historic partnership of Rolex and New York Yacht Club, which was forged in the 1950s. Through this enduring association, one of yachting’s greatest traditions was established with a winning sailor being presented a specially-engraved Rolex timepiece.

Out on the water, the fleet was sent up Narragansett Bay for the second consecutive day, where racing was held in an eight knot south-southwesterly breeze. The team representing one of the oldest yacht clubs in the world, London’s Royal Thames Yacht Club, was in the most perilous position of the 17 competing teams.  Having been in the lead, or tied for the lead, through the entire series, it was their regatta to win – or lose. In the first race of the day, an eighth-place finish put their nine-point cushion under pressure. With their closest competitor in the standings – Marblehead’s Eastern Yacht Club – finishing fourth, the gap shrunk to five points.

“We didn’t make it very easy for ourselves throughout the day,” said John Greenland, skipper of the Royal Thames Yacht Club team.  “At one point in the first race we almost sailed ourselves into a really comfortable position. Instead it turned inside out. But that’s how the fleet has been all week. You just have to take each race as it comes.”

Greenland said the team had a conversation to make sure they were in the right mindset going into the last race. They crossed the line 10th, with Eastern Yacht Club following in 12th; the Brits securing the win 71 points to Eastern’s 78. “The overall level has absolutely improved,” said an elated Greenland. “The competition is demonstrated in the results. There are some seriously good sailors in these boats who are struggling to get into the top five. It’s a great conclusion to years of preparation… everyone is over the moon.”

The New York Yacht Club’s team, led by skipper Paul Zabetakis, concluded the series second overall after finishes of 3-6 were added to their score line for 77 points. “We were third on the first day then we dropped to ninth; we had a couple of bad races,” said Zabetakis.  “We kept telling ourselves we could do it. Yesterday we went from ninth to fourth and then today it was a matter of sailing our own race. We felt like we did a great job.”

The only team new to the 2015 Rolex New York Invitational Cup, Australia’s Middle Harbour Yacht Club, not only met their goal for the regatta, they exceeded it. Hoping to finish in the top-five, they were fourth overall with 81 points after finishes of 7-2 on the final day of racing. Just one point behind was the Japan Sailing Federation, after placing 2-5 today.

Guido Belgiorno-Nettis, skipper of the Middle Harbour Yacht Club team was very happy with team’s final position in their first appearance at the event. “We’re a bit hard on ourselves,” said the 2011 Rolex Farr 40 World Champion.  “Putting the spinnaker in the water on the penultimate day of the competition was not a very smart tactical move. It set a bad precedent; we were about fourth [at that point] and then we finished 11th in that race. If you’re in fourth place around the top mark you have half a chance of defending that position and not getting caught up with the fleet; but once you drop back its very hard. We came second today and once we managed to get out of the pack we just kept extending.”