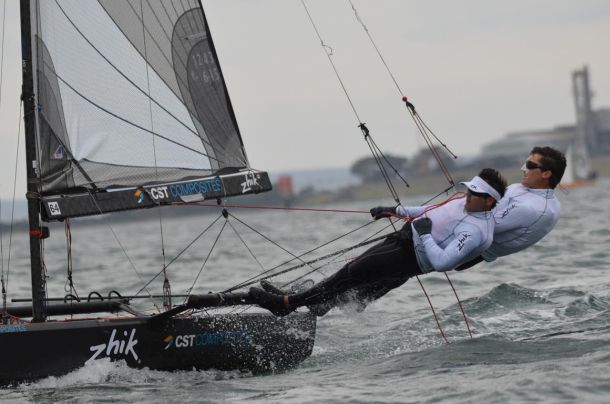 British teams hold the first five places in the results after Race 1 of the fleet racing for the International 14 World Championship, being hosted by Royal Geelong Yacht Club.

Glen Truswell and Sam Pascoe, the current European champions, are at the top of list, kick-starting their assault on the championships. In second place is four-time International 14 World Champion Archie Massey and new crew Harvey Hillary. Following in third position is Ben McGrane and James Hughes, in front of fourth placed Andy and Tom Partington, while Katie Nurton and Nigel Ash take up the fifth slot.

Truswell led the fleet from start to finish with Massey never far away.  It was a tight battle between the two as they worked the shifts and the constantly changing pressure. Whilst the rest of the fleet were left in the wake of these champion sailors.

The day started with an hour-long onshore postponement as the PRO waited for the breeze to settle and build. Once out on the course the earlier onshore anxiety of having to wait out the breeze, combined with the fast ride to the start line and early regatta jitters, took its toll on several of the teams as they pushed their way along the line and over early forcing a general recall.

The second attempt at a start was under the U flag, signalling race disqualification for early starters. This time the fleet got away, except for two teams – Australians Anthony Anderson/Mike McDonald and the highly rated team of Dave Alexander racing with Massey’s previous world champion crew, Dan Wilsdon.  They sailed the full course before finding out their disqualification fate for the first race of the regatta.

Truswell was reserved in his comments on today’s race. “It was a really mixed day. The wind was quite shifty.  I think we had everything from three knots to pushing 20 which made the boats really difficult to set up from a rake and power perspective. Halfway up the first beat the wind started to die and we had to scramble around the bottom of the boat, pulling strings, trying to get the rig set up right, to get some depth into the sails to give us some power. We managed to do that which brought us into the windward mark, fairly close to our arch-rival Archie the four-time World Champion.”

Around the first mark Truswell was in the lead by about three boat lengths. The breeze kicked and the top boats flew across to the wing mark. Massey kept up with Truswell while behind them Mark Krstic/Cameron McDonald (AUS) led a tight group of about 10 boats including David Hayter/Trent Neighbour (AUS), McGrane, Nurton and Partington. There were a few tumbles on the first run with Chris Rutz/Michael Radziejowski (USA) being the first to test the water temperature.

“The wind was building all the time. Then the converse thing happened. We got stuck upright with a super powerful rig in approaching 20 knots.  That made the next upwind really tricky for us. We were fighting the boat an awful lot. It wanted to take the upper hand, but we just managed to stay ahead.

“Archie was a bit unfortunate at the windward mark. The breeze was shifting around quite a lot and he had to double tack around the windward mark. We were doing about 18 knots downwind when they went for the double tack. We were making good ground. Then throughout the rest of the race it just died off. We managed to hold our lead and maybe because of their double tack, maybe stretch it out a bit,” Truswell added.

Massey’s crew, Harvey Hillary, keenly shared his thoughts on today’s race saying their day was really a story of two mistakes. “We actually overtook him at the leeward gate the first time round, but then we got the lay line slightly bad and he got inside us. After that we were really close up the second beat and then we got the lay line wrong at the windward mark and had to do an extra two tacks.

“It was really unstable conditions out there. Anything could have happened on that last leg,” Hillary said.

Heading towards the finish line the breeze then denied the fleet a clean finish as it faded to a drifter.  Truswell and Massey just had enough way on to cross the line. Several of the back-markers picked up the last of the puff from the fading breeze to start to close the gap on the leaders, but it was too late to make any difference to the top places.

Racing continues tomorrow with one race scheduled to start at 2pm. The forecast is for a perfect day of racing with a steady 12 to 15 knot south-easterly.