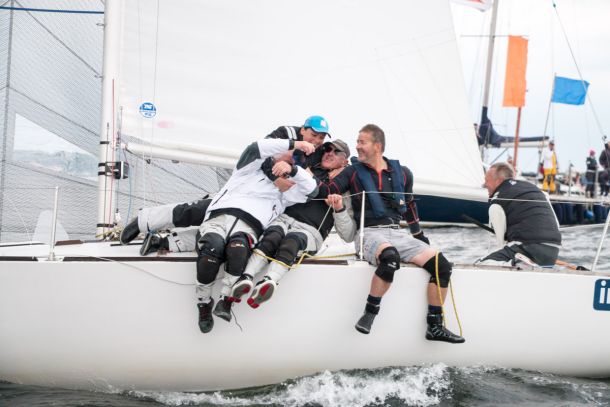 As on Thursday, racing was started with a Black Flag after Principal Race Officer Klaus Lahme did a general recall. Southworth, who had already suffered a Black flag disqualification on Thursday, opted for a conservative start, as he couldn't afford to let opponent Mike Ingham get away or – or even worse – let himself get pushed over the line.

Chris McLaughlin, who sails on board Ian Southworth´s “Il Riccio”, said: “Our worst fear was to have a Black flag start again, but we were relieved to get a good start and to find ourselves first at the windward mark through some very difficult shifts arriving.”

Southworth and his crew have been sailing “Il Riccio” for five years now. “It has been the longest quick campaign of our lives”, said Chris McLaughlin. “We used to race J/24 in the 80s and in the early 90s quite successfully, so in 2005 we thought we could just step on the boat and win the J/24 World Championship in Weymouth”. The crew finished eighth – “that was very hard” – and since then has constantly been working on speed, performance and sailing skills.

“We have virtually rebuilt Il Riccio from the keel to the mast top”, said Chris McLaughlin. At some World Championships like in Howth, Ireland, and in Cannigione, Italy, the crew was very close to the trophy, but narrowly lost in the end.

“The thing we have learnt is that if you are not enjoying yourselves, you will never succeed”, said McLaughlin. “We have a team that is very close to each other, who has fun along the way, no matter if we win or lose. There were times in the middle of this week when I became very nervous and tense, and the rest of them laughed my out of it and made me have a glass of wine, and I felt a lot better the next day.”

The “Il Riccio” team consists of helmsman Ian Southworth, upwind/downwind trimmer Andrew McLelland, bow woman Julia Scott, pit man Chris McLaughlin and tactician David Howlett, who is the head coach of the German Olympic team. McLaughlin again: “I have known David since I was 18 years and it has been fantastic to sail with a friend who is also such an incredible coach. David is a very special person, and also very demanding. We have not been drinking this week, we have not been partying, and we have eaten a lot of cake and tea in the afternoon because David has high standards. I think if the German Olympic team has the same experience as we have had, I think they should be winning some medals in Rio.”

Andrew McLelland has been a J/24 European Champion in the past. “He is a competent helmsman and brilliant trimmer”, said Chris McLaughlin.

According to the crew, the most important part of the team is bow woman Julia Scott. Julia is a former 470 and Yngling Olympian. “Despite of being a brilliant sailor, Julia makes sure that everyone is nice to each other. She is the boss! And she is incredibly tough. When we sailed the worlds in Weymouth in 2010, Julia had just given birth to her first kid one week before. I think there haven't been many J/24 who have measured in a breast pump at an international competition!”

Mike Ingham from Rochester, USA, who was sailing with the 2014 J/24 World Champion, Will Welles, as a tactician, couldn't cover Ian Southworth in the last race and finished in eighth position. With 26 points of difference, he and his crew became vice champions of the J/24 worlds. With Travis Odenbach, The third also comes from Rochester, USA.

Competition was tight for the title of the best female crew. In the end, Stefanie Köpcke and her team “Vega Ragazza” won, closely followed by Ragna Thönnessen and team “Juelssand”, with just one point separating the teams. “Vega Ragazza” have sailed a very good series this year, crowned by the title of the German Champion 2015.

Javier Arribas Harten from Perú won the trophy for the best Crew under 25.

Best German boat is Team “Tinto” from Hamburg, helmed by Till Pomarius. Tinto, a mixed crew with an average age of less than 25, took the honours from older and more experienced crews such as team Rotoman or Süllberg. “Our next goal are the worlds 2016 in Japan”, said Genoa Trimmer Bele Schuett.

Tonight, the Worlds end with a closing ceremony in the Marina of Boltenhagen. After a week with exciting racing and good after Sails fun, time has come for the crews to face workaday life again – or, as Chris McLaughlin said: “I will put my tie and suit on, I will get my hair cut on lunch time and go back to be pretending to be an executive.”