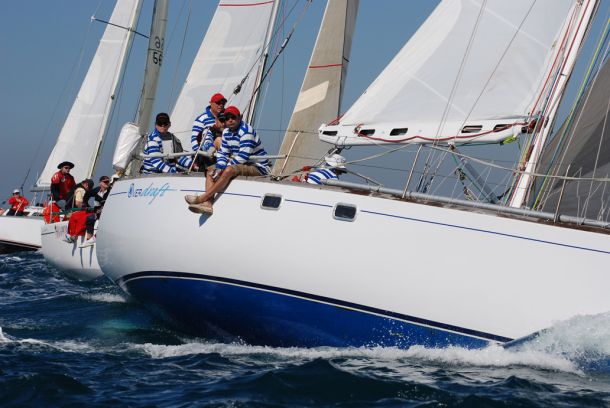 Winter has barely arrived in the south eastern states and already a savvy bunch of yachties are planning to cast off the woolies and get out of town. Entry for the Royal Queensland Yacht Squadron’s 9th annual Club Marine Brisbane to Keppel Tropical Yacht Race is open and a diverse fleet is building for the 1100hrs start on Thursday July 30, 2015 from Brisbane’s Moreton Bay.

Of the RQYS organised 343 miler, Rear Commodore Mark Gallagher says, “Already there’s a great fleet heading north to enjoy the fantastic hospitality shown by the finish crew at Keppel Bay Marina. The course is scenic and like most coastal passages it’s a thinking person’s race to play the wind and tide to maximum advantage. And we throw whale watching in for free!”

His team is making it even easier for Sydney Gold Coast yacht race crews wanting to take the option of back-to-back coastal races as the best way to leap-frog north to the Whitsunday regatta loop of Airlie Beach, Hamilton Island and Magnetic Island race weeks.

There’s an existing agreement in place with the Cruising Yacht Club of Australia that paperwork submitted for their Category 2 Sydney Gold Coast yacht race also satisfies the entry criteria for the Brisbane to Keppel. RQYS’ latest initiative to assist owners with logistics is the offer to send their gear truck to Southport Yacht Club to meet the CYCA’s fleet and collect equipment owners need transported north to Manly for the next stage Club Marine Brisbane to Keppel Tropical Yacht Race.

For the past four years supermaxis Wild Oats XI and Grant Wharington’s Wild Thing have been the gun line honours boats. With the Oatleys’ race record holder Wild Oats XI on a ship to Los Angeles to tackle the Transpac Race there’s going to be some elbow room at the head of the table.

Sam Haynes from Sydney has a new Celestial, a JV designed TP52, and though he’s won division one for the past two years he’s coming back to try for a hat trick, and hoping this year is the running race advertised in the brochures. “We are due for a downhill ride, but regardless I need to take the TP north and it’s a good step in that direction, towards Hamilton Island and the IRC Australian Championship. It’s pretty scenic along the Island and getting into the bay at the end; the race itself is good to do.”

The people’s boat, Russel McCart’s Volvo 60 Spirit of Mateship, is returning with its mix of regular and ADF crew.

Now in its ninth year, the 343 nautical mile challenge from Moreton Bay to the finish in Keppel Bay starts at 1100hrs on Thursday July 30, 2015. Further course details will be included in the sailing instructions.

The Notice of Race has been published and online entry is now open.