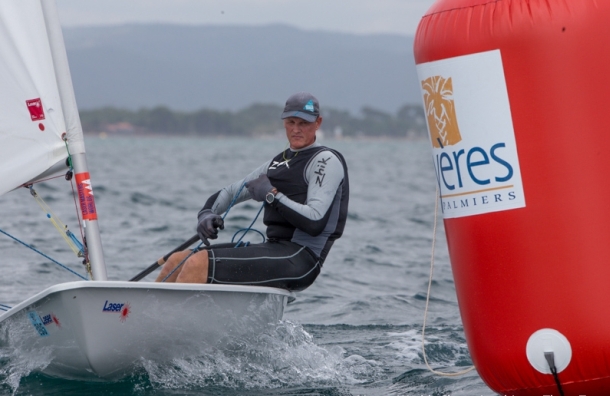 Last July, the NSW sailor won eight out of the nine races at the Laser Masters World Championship in Hyeres, France, overcoming an international fleet of 116 in the Standard Masters class. Media at the event right described Beyer as “being in a class of his own”. He beat a strong field for the Masters Athlete of the Year.

Beyer’s passion for sailing speaks for itself. From 2001-2014, the disciplined sailor won an unprecedented nine gold medals, two silver and one bronze at 12 Laser Masters World Championships’ held at various locations around the world.

“I have been fortunate,” Beyer said. “The Laser Masters Worlds is the one regatta on my yearly calendar that I make an effort to compete in.”

Other Laser successes for the 48 year-old include several NSW, Australian and World Masters Games wins. “And although I have little time for training nowadays because of coaching commitments, I find that I’m still competitive with younger sailors,” he said.

Earning a Sports Science degree in 1987 has served towards Beyer’s knowledge and commitment to the physical and mental requirements of elite sports. It has also gone a long way in helping him and the aspiring Olympians he coaches to achieve their goals.

“A combination of participating in high-calibre competition and elite coaching has given me a unique edge in both disciplines and I hope to successfully continue for many more years,” Beyer remarked.

His fulltime role as a freelance Olympic Laser coach allows him to exercise best practice policy of training and logistics with maximum efficiency, yielding highest quality training and planning. Victories at the Youth Worlds, Asian Games and qualifying every Laser sailor in his team to Olympic qualifications from 2004 to the present, have been his reward.

Amongst Beyer’s current crop of athletes are Colin Cheng from Singapore and James Espey from Ireland. Both comfortably qualified their respective nations for the RIO 2016 Olympic Games via the Laser Worlds in Spain.

“I am very proud of Colin and James,” Beyer said. “Attention to detail and understanding of all complexities of the sport has greatly assisted me in coaching and my own sailing.”

“Australian sailing apparel manufacturer, Zhik, has long been a supporter of me and my team’s aspirations. Given the athletes on my team have limited funding; we are appreciative of Zhik’s support. We’re always on the lookout for other sponsors who wish to support our endeavours and join this worthwhile journey,” Beyer commented.

At times, the sailor/coach also accepts other high quality training partners into the group. Recent additions are sailors from South Africa, Russia and China who are now nearing the completion of their Australian and New Zealand camps in preparation for the European circuit which begins in March.