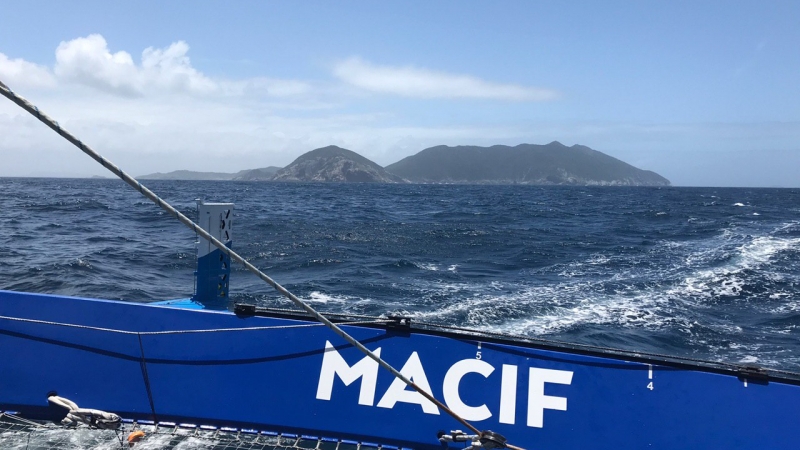 Following Maxi Edmond de Rothschild’s pitstop on Tuesday, MACIF remains in the lead of the Brest Atlantiques, but tonight will be making a stop themselves in Rio de Janeiro for repairs to their central hull rudder. Sodebo Ultim 3 is expected about five hours later in the Cagarras Islands and should be able to take the lead, with Actual Leader and Maxi Edmond de Rothschild following behind.

The MACIF team are preparing for the pitstop at the Gloria Marina, home to the sailing events during the Rio 2016 Olympic Games, where the trimaran is due to arrive around 6-7pm. At 3pm, the boat crossed Cabo Frio and gybed towards Rio, with 18 knots of favourable breeze. The pitstop will enable the technical team to replace the central hull rudder which was damaged after colliding with an unidentified object. The replacement rudder will be provided by Banque Populaire.

Sodebo Ultim 3, who at 3pm were 100 miles behind MACIF, will undoubtedly be able to lead the fleet for the first time since leaving Brest. Thomas Coville and Jean-Luc Nélias are expected to pass through the Cagarras Islands, located 2.5 miles off the world-famous beach of Ipanema, about five hours after MACIF, around midnight.

According to Christian Dumard, weather consultant for Brest Atlantiques, Sodebo Ultim 3 has a good chance of getting away after passing the Islands. “They’ll encounter steady winds of around 25 knots, which are ideal conditions to go fast, while for the rest of the boats, passing the Cagarras Islands at a later stage, the winds will be stronger, reaching 28-30 knots.”

This won’t necessarily be to the advantage of Maxi Edmond de Rothschild. Since leaving Salvador de Bahia on Tuesday at 21:58, Franck Cammas and Charles Caudrelier haven’t had a particularly smooth ride, as shown by their average speed of only 2.6 knots between the 11am and 3pm rankings!

“A depression is heading south from South Africa, together with a weather front to the north that stretches all the way to Brazil. They are passing through it now, with very little wind along the coast of Brazil. As they left Salvador, they couldn't head eastwards, and have much less wind than Actual Leader who are further offshore,” adds Christian Dumard.

Yves Le Blevec and Alex Pella, who between 11am and 3pm were making progress at 14.2 knots, will probably use this to progress to third place.

And so, it’s all to play for as the passage through the Cagarras Islands approaches, and it is probably not over yet according to Christian Dumard. “On the other side of the South Atlantic, Sodebo is in danger of getting caught up in the St Helena High, which will likely grow in intensity, leaving only a small window of opportunity to pass to its south.”