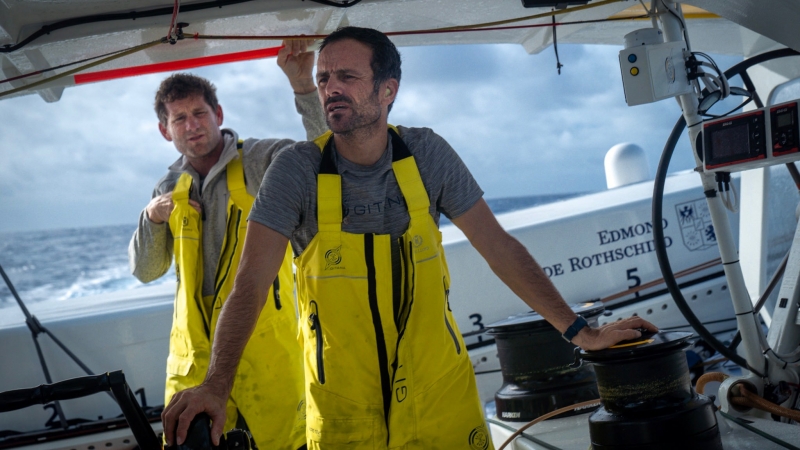 Maxi Edmond de Rothschild slowed down marginally overnight Saturday and has regained speed on Sunday further increasing their lead on the trimaran MACIF, Sodebo Ultim 3 and Actual Leader. The leader of the Brest Atlantiques is expected tomorrow night at Gough Island, located at the edge of the ice exclusion zone, which they will leave to starboard before attacking a series gybes along the limit zone.

While the sea has calmed down a little today compared to Friday and Saturday, the messages sent on Sunday by the on board media men, who were finally able to type a few lines from their laptops, testify to the harsh conditions that the four trimarans on the Brest Atlantiques have endured for the past 48 hours.

“It has been a few days since the simple act of bending over a keyboard to write these few lines seemed impossible. Only the challenge of trying to be on a laptop while the boat was trying to break the high jump record in the middle of the South Atlantic was physically impossible for me,” explains Martin Keruzoré, on Sodebo Ultim 3.

Before adding of skippers Thomas Coville and Jean-Luc Nélias: “After these three days of hellish seas, this morning they are hidden under hoodies, their features drawn, exhausted with bloodshot eyes. The South with the rhythm of its swell dictates life on board, let’s say it is not so poetic and it is made up of a series of short grunts, sentences and at times quite foul language!”

Yann Riou, Maxi Edmond de Rothschild's on-board media man tells a similar story: “Tonight, we should reach the ice gate. That doesn't sound very appealing when you say it like that… However, it also means we'll be done with the damn reaching! Three days we've been been beating against a rough sea in strong wind. So yes, it has become a little less ardous than when we left Rio, but it's still complicated. It's complicated to find the right compromise to go fast without risking damaging the boat. It's complicated to sleep between jumping across two waves. And it's complicated to write this message with a keyboard that has trouble staying on my lap. So yes, we may be a little cold, but we're also happy to get there, down into the infamous roaring forties…”

Maxi Edmond de Rothschild, having left Tristan da Cunha Island to port at the end of Sunday, is expected to arrive overnight to Gough Island, located in the middle of the South Atlantic at the northern limit of the ice exclusion zone, into which trimarans must avoid entering.

Slowed down last night in a less windy area, Franck Cammas and Charles Caudrelier have since taken advantage of a less hammering sea to raise the pace with peaks averaging 33.4 knots between the 12 and 4pm position reports. They been able to build their margin on MACIF (François Gabart/Gwénolé Gahinet) who at 4pm were 103 miles behind (compared to 51 eight hours earlier), followed by Sodebo Ultim 3 at 223 and Actual Leader (Yves Le Blevec/Alex Pella) at 340.

Arriving at Gough Island, which they will leave to starboard, the leaders will then run under an area of high pressure in a westerly wind which will a series of tacks along the exlusion zone, while Actual Leader should benefit from a gradual move north of the high to make a more direct course towards Cape Town, where the four trimarans are expected Wednesday night to Thursday.