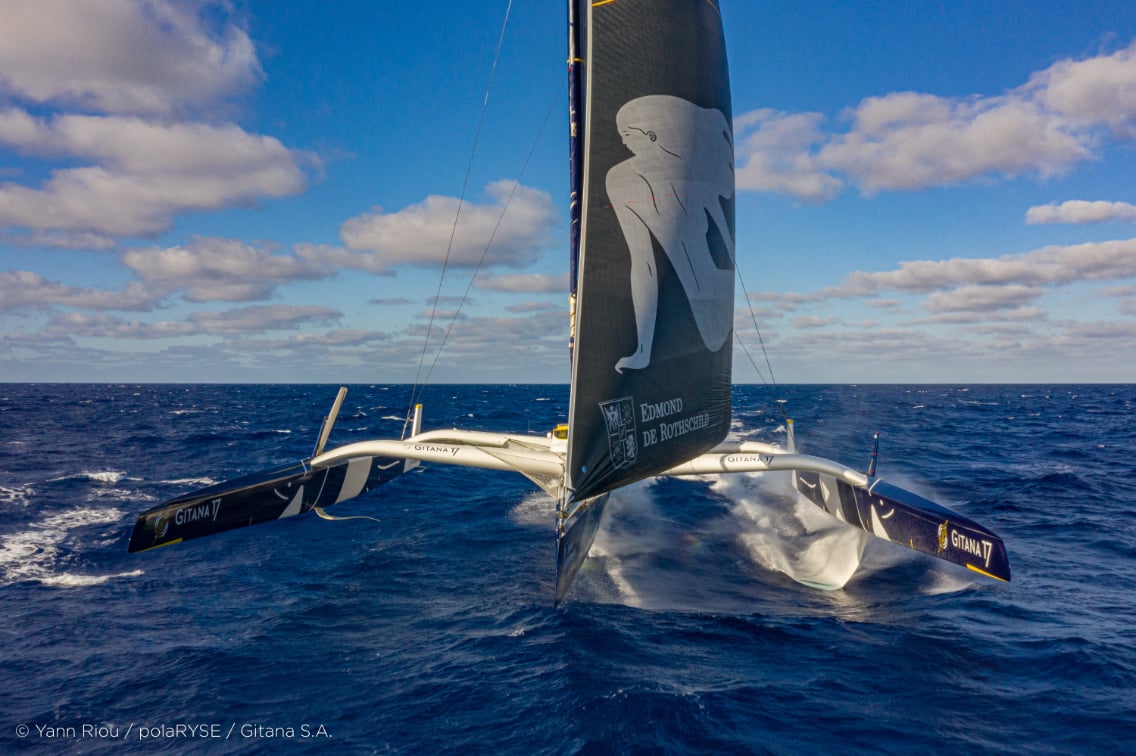 Following a very busy summer, which saw the Maxi Edmond de Rothschild secure her first victory in the Rolex Fastnet Race, as well as enabling the Franck Cammas / Charles Caudrelier pairing to validate their qualification for the Brest Atlantiques, the 32-metre giant returned to her technical base for a few weeks on 26 August.

Part of the schedule for 2019, the objectives for this haul-out were twofold for the members of Gitana Team. With two months to go for the start of the Brest Atlantiques, a check-up of the general structure, appendages and systems was called for and the five-arrow team also made the most of this three-week period to continue its developments and introduce a major new feature aboard the Maxi; an aft beam fairing that further enhances the aerodynamics of the platform.

“Standing still is going backwards in relation to the competition”

These few words sum up skipper Franck Cammas’ philosophy in a nutshell and they also express the mindset with which the members of Gitana Team are working: continuing to break new ground in order to reach the objective set when creating the project.

A new development adorned the Maxi Edmond de Rothschild on Monday and it hasn’t gone unnoticed. It amounts to 32m2 of stretched canvas, which has been added to the aft section of the aft beam. It’s a fairing that moulds the curves of the beam perfectly, creating an elegant finish. However, as one might imagine, the aesthetics weren’t the primary concern of the five-arrow team; performance naturally prompting this latest innovation.

“This fairing of the aft beam was part of the initial design for the Maxi Edmond de Rothschild and Guillaume Verdier had even considered the forward and aft beam as sections of aerodynamic geometry. Indeed, the aerodynamic CFD studies showed a real benefit in making this addition and the timing was right so we didn’t have to think twice about going ahead with it,” admitted Franck Cammas, who was one of the pioneers of this technology with Groupama 2, which had fairings on the forward beam.

“With the current speeds posted by our boats, the aerodynamic braking is almost as significant as the hydrodynamic braking. However, the hydrodynamic section has been a focus for designers and sailors for many years, a lot more so than what happens above the water. Until recently, the aerodynamics has taken a backseat in team’s concerns. Gitana’s strength and that of Guillaume Verdier was to imagine and build the Maxi Edmond de Rothschild with this aerodynamic vision incorporated in it, which effectively means we can make improvements today that are coherent with the boat,” explained the skipper.

A gain of around 1 knot at certain points of sail

“This new form not only reduces the drag, by pulling the flow of air tightly around it, but it also creates lift, which will have the effect of making the platform more lightweight. This fairing was made of Oratex and it’s a flexible canvas akin to what you find on glider wings or microlights. This represents an additional surface area of around 32m2 and weighs in at nearly 50kg. In optimum conditions, studies predict a gain of over 1 knot at 30 knots of boat speed. This canvas may be able to push up to 10 times its weight,” explained Sébastien Sainson, director of Gitana’s design office.

This type of fairing has become par for the course on the America’s Cup boats, but it’s the first time that an offshore racing team has installed a structure of this kind on a boat dedicated to the open ocean: “Godzilla, the multihull with which the Americans from Oracle won the Cup in Valencia, was the first to brave this new development. After that, all the AC 72s and more recently the F50s in the last Cup were equipped with them. In our case, it’s more the implementation and the realisation which prompted studies, because contrary to the America’s Cup boats, we cannot allow ourselves to dismantle or redo the system every evening. As a result, our challenge centred on solidity as we needed to come up with a structure capable of withstanding days and days of sailing at high speed. The timing seemed right to us, especially as the addition of this fairing has no impact on the reliability of the Maxi. If it were to be damaged at sea, that would of course be regrettable, but it would have no influence on the intrinsic performance of the boat.”

The addition of the aft beam fairing within the allotted time is yet another illustration of the strength of the group working in the stable fitted out by Ariane and Benjamin de Rothschild. Indeed, it took nearly two months’ work in terms of studies. Seven versions of the form were manufactured before they came up with the final version and three manufacturing plans were put forward before opting for this final version. In terms of the realisation, ten people rallied together within the Gitana Team in a bid to stick to the very tight deadline of two and a half weeks.

This relaunch heralds the resumption of training as well as the start of the countdown to the Brest Atlantiques. Indeed, in 49 days, on 3 November 2019, the four duos competing in this first ever edition of the 14,000-miles sprint across the Atlantic, will set sail from the tip of Finistère in north-west Brittany. In the meantime, Charles Caudrelier and Franck Cammas’ sailing programme is set to be rather full-on. Keen to stick to what works, the skippers of Edmond de Rothschild intend to get lots of time on the water and make the most of the weather conditions served up over the next few weeks to round off their preparation. A joint training session is already lined up with the Macif team in early October.