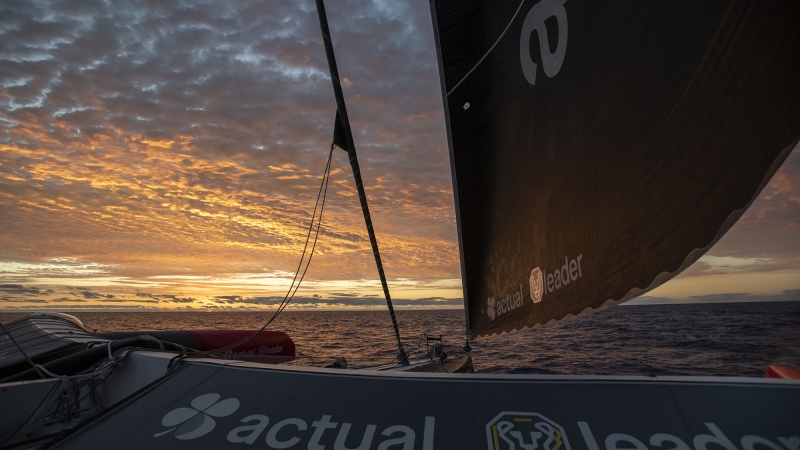 Actual Leader is through the Doldrums - Ronan Gladu pic

With less than 2000 miles to go before the finish of the Brest Atlantiques, Maxi Edmond de Rothschild is now racing against the clock to reach the Azores as quickly as possible and then head straight for Brest.

Meanwhile, for MACIF and Actual Leader, it looks like it will be an interesting and strategic play off to finish the race.

Even though they now have a comfortable lead, Franck Cammas and Charles Caudrelier are in no way slowing down.

In a video taken by media man, Yann Riou, Cammas explains why: “Having passed Cape Verde, the challenge for us now is to reach the Azores as soon as possible in order to enter into a front, and benefit from favourable wind conditions to get us quickly back to Brest. We’re doing everything we can to make fast progress, albeit with pretty light winds.”

These light winds did slow them down for part of today, with the boat averaging 22.8 knots between the 11am and 3pm rankings.

If they reach the Azores as scheduled on Monday, they should be able to attack the final stretch at speed, and arrive in Brest on the morning of Wednesday, December 4th. If not, they will encounter some difficult weather, and it will be a few hours later before they are able to reach the finish.

In second and third positions, MACIF and Actual Leader crossed the Doldrums without any real problems, as François Gabart told their on board media man Jérémie Eloy: “Towards the end of yesterday, we weren’t going very fast at all; there was little wind and a pretty choppy sea, so it was difficult to make good progress. That said, we haven’t run into anything too extreme.”

“Apart from a fairly strong squall of 22 knots, crossing the Doldrums hasn't been as dangerous as it could have been. We got out at around 2-3am this morning.”

Actual Leader followed suit a few hours later and is now 150 miles behind MACIF.
Looking at their current routes and progression, MACIF and Actual Leader are expected to arrive next Friday and Saturday in Brest.

“We're going to have to speed up and above all choose our options wisely,” says François Gabart.

“We have to be quite tactical here, not to compete with Gitana, which now seems to have a fairly straightforward route back to Brest, but with Actual Leader. It’s going to be quite complex, there will be quite a few possibilities for us on the North Atlantic.” And so, the game is on right to the very end…