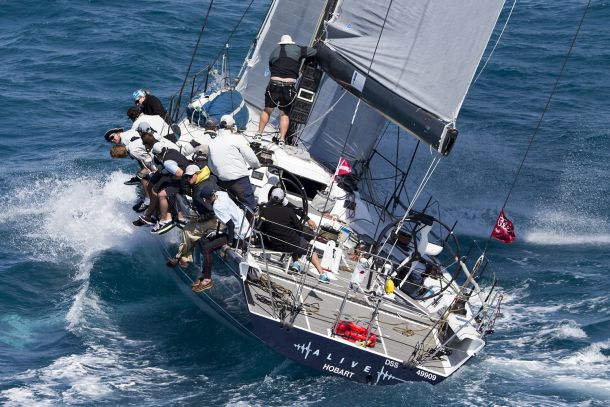 Swell and a breezy day four at Audi Hamilton Island Race Week in the Queensland Whitsunday islands tested crew work and produced exciting downwind rides, but also contributed to a couple of nasty collisions among the multihull fleet.

The IRC division A boats completed two windward/leewards on the eastern course and IRC divisions B and C one short course race and one round-the-islands race in the 17-20 knot SSE winds.

On the big boat division line honours count, Bob Oatley’s team on Wild Oats X is unrivalled. Philip Turner’s near sistership, the RP66 Alive, skippered by Duncan Hine and helmed by Andrew Hunn from Hobart, is trailing the silver boat as the Oats crew put miles under their belt in the lead-up to this year’s Rolex Sydney Hobart with the bigger Wild Oat’s XI going for its ninth line honours win.

“What doesn’t kill you makes you stronger,” said a circumspect Hunn this afternoon as day four of the six day series wrapped up. “It was a challenging day for us, in race one our jib popped out of the foil and we were over early in race two. Oats is so solid that any slip by us is a confirmed loss, and so we paid the price. The boat is fine and the crew work solid and growing every day.”

Series scores remain unchanged and Karl Kwok’s TP52 Team Beau Geste is inching closer to a second consecutive Australian division A title, a painful outcome for the Aussies crews given the boat is racing for New Zealand on this tour. Kwok and right hand man Gavin Brady have stacked the crew with the best in the business when it comes to TP52 racing. Matt Allen’s Ichi Ban, though well-credentialed, and the South Australians on Secret Mens Business haven’t had the time in the class of Brady’s bunch.

Bob Steel’s latest Quest is showing major Division B championship potential across the wide-ranging conditions that the 202-strong entry list has encountered over four days, scoring a win in today’s average 15 knot sou’easters and in Wednesday’s light air. Two points back is Vamp and Khaleesi has closed the gap, now in third by a point thanks to a win and a second.

Hickman is wearing the ‘lucky’ crew shirt Hamilton Island owner Bob Oatley gave his Sydney to Hobart team when he owned the Farr 43 Wild Oats back in the 1980s, and he’s working towards a successful defence of Wild Rose’s current IRC Championship Class C title. “We were coming to Bob’s island with Bob’s old boat so I pulled it out of the back of the cupboard. I don’t think I’ve worn it since ’88,” Hickman said. “Hamilton Island turned on a perfect day for us, Bob would be happy.”

“Division C isn’t made up of professional sailors like division A but it’s a very impressive line-up and we are having a fantastic series. Justadash is sailing well and six points from us and Michael Spies and L’Altra Donna is right on our hammer,” Hickman added.

Tomorrow’s forecast is for 15-20 knots out of the sou’east and the chance of a shower or two. The regatta committee’s plan is island races for all divisions bar the Cruiser/Racers. This fleet has their turn at a windward/leeward, then a passage race.