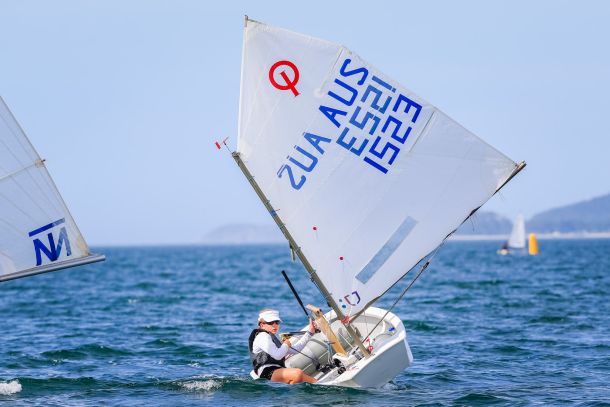 Sail Port Stephens’ Junior One Sail Series drew a multi-fleet line-up of young sailors from Wollongong, Sydney, nearby Newcastle and Lake Macquarie, and of course Nelson Bay, to the two day regatta that played out in ideal conditions.

The Weare/Curry family of four representing Port Kembla Sailing Club in the Illawarra is enjoying the full Sail Port Stephens experience as crew on the Sydney based Beneteau 45 Black Sheep, which finished equal third yesterday in the Commodore’s Cup division one results, fourth on a countback. Dad Aaron and the two younger ones, Riley, 11, and Connor, 15, missed the final Cup race for good reason, the opening day of the junior series at Soldiers Point.

“We’ve been part of Sail Port Stephens for the last six years and when we found out a junior series was on offer we put one kid in, then both this year,” said mum Rebecca Curry. “It’s a lovely spot to holiday and a big attraction for us and the owner of Black Sheep is it’s only a day sail away, or few hours in the car from Sydney and Wollongong.”

Connor placed third in the Junior Off the Beach division 1 results, behind the top scorer Lukas Lechner-Scott and Felix Prince in second. A quick tally of Connor’s back-to-back regattas these school holidays add up to a whopping 13 straight sailing days in a fortnight.

Lechner-Scott represents Belmont 16 footers with his Laser Radial and he says the junior series highlight was “finishing first in the first race and then trying to keep my lead.” On sailing in general he adds, “I love the tactics, and using both brain and muscle together.”

Division two Off the Beach results put Sophie Cottam narrowly ahead of PSSAC clubmates Harry Bailey and Marcus Busch, the same final order in the BIC one design division.

The 16 year-old top placegetter said, “Sailing with my friends is always fun and Harry and Marcus are really great competition… but it’s very good natured.” Cottam crewed on the Beneteau 40.7 called JAB on Monday and Tuesday with the main Sail Port Stephens fleet, and was stoked to hear they went on to take out the Commodore’s Cup series.

Jess Campbell placed first in the Sabot division and Jack Ferguson won the Optimist division from his sister Mina. The talented Ferguson siblings are only 13 months apart; Jack says Mina is “feisty”, she says he’s “competitive.” They enjoy the Optimist class because the boats are small and manageable, and everyone’s close together on the race course. Plus there are so many opportunities to make new friends with hundreds turning up to state titles.

Jess thought the series was “really fun” but she would have liked more than six races. Normally she skippers a Pelican on Lake Macquarie, a boat that uses three sails. The specification for the Junior One Sail Series is pretty obvious, so dad Geoff went out and bought her a single sail Sabot.

So, would she rather sail single-handed or with crew? “I like sailing with someone, if you capsize it’s 50/50 the shark’s going to bite the other person, or we could fend off a shark together,” is her hilarious reasoning for her two person preference.

David Ferguson from the Junior One Sail naming rights sponsor Port Stephens Strata, and father of first and second in the Opti division Jack and Mina, says he agreed to support the junior multi-fleet regatta “because community support is what it’s all about and the more people aware of this amazing destination the better. The business has been operating in the bay for 30 years so it’s very well-known. We have thoroughly enjoyed the opportunity to support the junior event.”

Ferguson really wants to put the Sail Port Stephens junior series on the map next year. “Families can fly up and charter a dinghy for their children and enjoy accommodation close to the water, amazing warm, flat water and great sailing conditions…this week’s stretch of above average weather has been ideal.

“It’s really healthy mixing different classes on the same course; the kids get to enjoy each other’s company. And with all the yachties in town for Sail Port Stephens there’s a real festival atmosphere and a few of the kids are crewing on the bigger boats.”

Speaking from his own experience Ferguson adds, “sailing has been very good to us as a family. It’s a healthy lifestyle and now that the kids are in charge of their own boats and making their own decisions they are learning important life skills.”