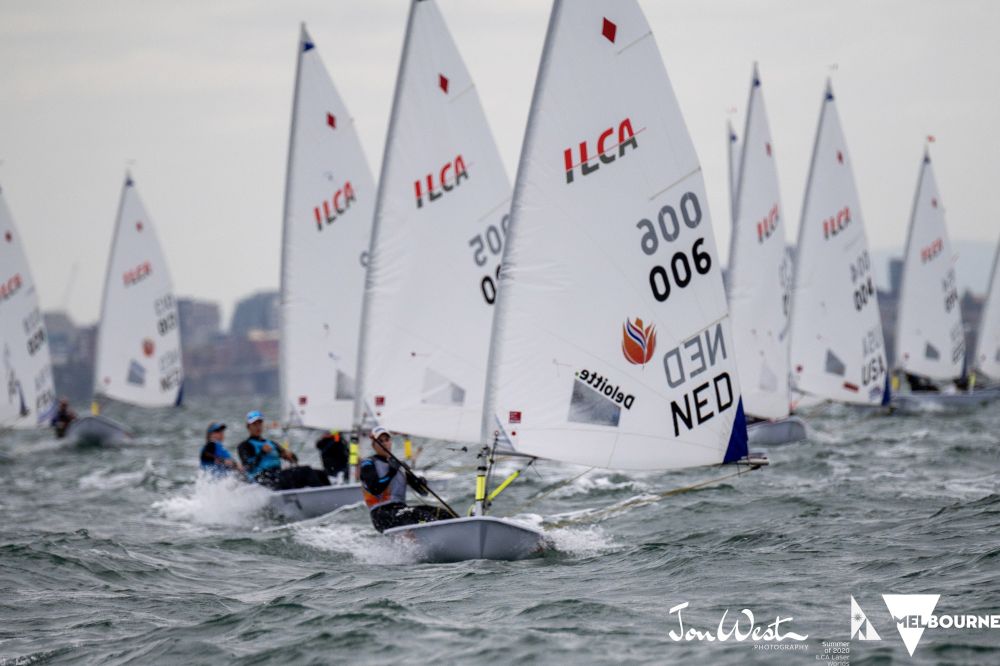 Rio Olympic Champion, Marit Bouwmeester (NED), is putting on a sailing masterclass at the ILCA Laser Radial World Championship in Melbourne. She had a hiccup in Race 8 when a massive wind shift caught her out, but a series of five consecutive race wins on previous days has allowed her to open a 24 point gap on Line Flem Host (NOR), her nearest rival.

The championship has been raced in a variety of conditions, from the very light winds of the first two days through thunderstorms, 25 knots with big waves, and today’s moderate winds on a cold and grey Port Phillip. In all conditions, Bouwmeester has looked quicker and her boat handling has been slicker.

She has been helped by the fact that other leading contenders have all had at least two high scores. But a nett of 21 points from nine races, with another drop to come into play after the first race tomorrow, makes it is easy to see who the dominant radial sailor is right now. But like all champions, she is striving for more.

“It was really tricky out there today,” she said in the boat park. “It (the day’s result) was OK, but we’ll see tomorrow.”

Defending champion Anne-Marie Rindom (DEN) echoed Bouwmeester’s thoughts on the conditions, saying, “It was a tough day, the shifts were hard to predict, one mistake and you get punished.”

Rindom had dropped back in the pack after four double-digit results but a fourth in the final race elevated her back into bronze medal position.

Intra-nation rivalry continues further down the leaderboard, with the most fascinating being among the Americans. After nine races, Erika Reineke and Paige Railey are tied on 110 points. Railey held a nine point advantage coming into the Worlds and will be match-racing tomorrow to maintain her lead and the chance to be selected for her third consecutive Olympics.

Russian star Daniil Krutskikh maintained his record of top 10 scores today in the men's division, with 5,2,3. His drop remains a sixth place from yesterday. He said that he had worked hard on being consistent in all conditions and was comfortable with the winds and weather that Melbourne has delivered.

Three Australians are fighting for the minor medals, with Brody Riley on 35 points, Michael Compton on 39 and Stefan Elliot-Shircore on 43.

Full results are available at http://sailingresults.net/?ID=80330