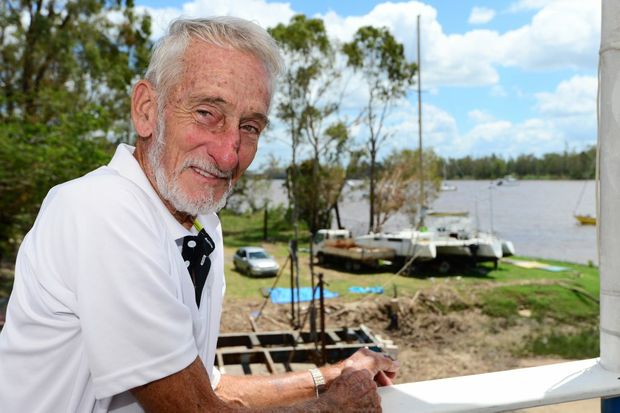 Retired boatie Hugh Hunter was rescued from his boat (pictured in background) when it started taking on water during Cyclone Marcia. Photo Sharyn O'Neill / Morning Bulletin.

The Morning Bulletin. By Melanie Plane.

LYING in the grass waiting for Cyclone Marcia to pass, Hugh Hunter prayed for survival. The 84-year-old had taken refuge on the banks of the Fitzroy River after his damaged boat the Mustang started to sink.

He had made a run for cover in the catamaran as the cyclone approached but had left it too late and was fighting for his life in extreme conditions.

“I had my wetsuit on because I was so cold,” he told The Morning Bulletin yesterday. “That might have saved me. I could still think anyway. Strangely enough I wasn't frightened.”

Earlier on Friday (February 20), the boatie had been on board the 'Mustang' near the Rockhampton city reaches when the cyclone threat increased. Growing up in Innisfail, Hugh knew a thing or two about cyclones and had a survival plan heading into the weather event. But like the Mustang, he said it all went downhill pretty quick.

Read the full story at the Bulletin here.