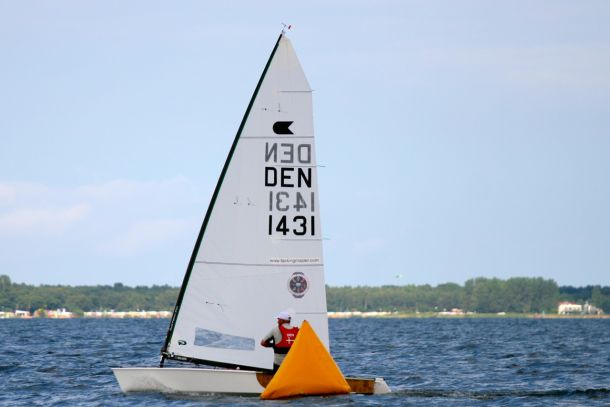 Bo Petersen (DEN) opened his 2015 OK Dinghy World title challenge with two race wins from two races after an epic day on the water in Puck, Poland. The 94 strong fleet had everything from 3 to 33 knots and hot sunshine to torrential rain. Jim Hunt (GBR) is second and Charlie Cumbley (GBR) is third.

In spite of being forecast to be one of the lightest days of the week, racing started after a slight delay in a 12-14 knot offshore and shifty breeze that taxed nerves and tendons to the limit as the sailors were stretched mentally and physically to stay in the game. At the first mark André Budzien (GER) led from Petersen and Cumbley after a very tricky beat that favoured both sides at some point as the wind shifted as much as 40 degrees at times.

Petersen moved into the lead on the second beat and just held on to win from Jørgen Svendsen (DEN) and Hunt. As the fleet rounded the final gate, a line squall passed down the course increasing winds up to 30-35 knots from the right hand side which took its toll on the fleet. Richard Burton (GBR) learned that he needed to tie better knots as his sail came down as the squall hit, and he lost a top placing in the race, struggling across the line in 42nd.

Race 2 took a while to get off as the wind died after the squall and then shifted. In fact it kept in changing through the afternoon. After a couple of recalls and a postponement, a dozen boats were pulled out on the black flag before the fleet got away. Cumbley led at the top and extended away from Budzien and Petersen, but it didn't last in the constantly changeable conditions.

By the second windward mark, Petersen had again taken the lead from Cumbley and Hunt. He held on round the final lap to take his second win of the day, with Hunt coming through to second and Greg Wilcox (NZL) passing Cumbley to take third.