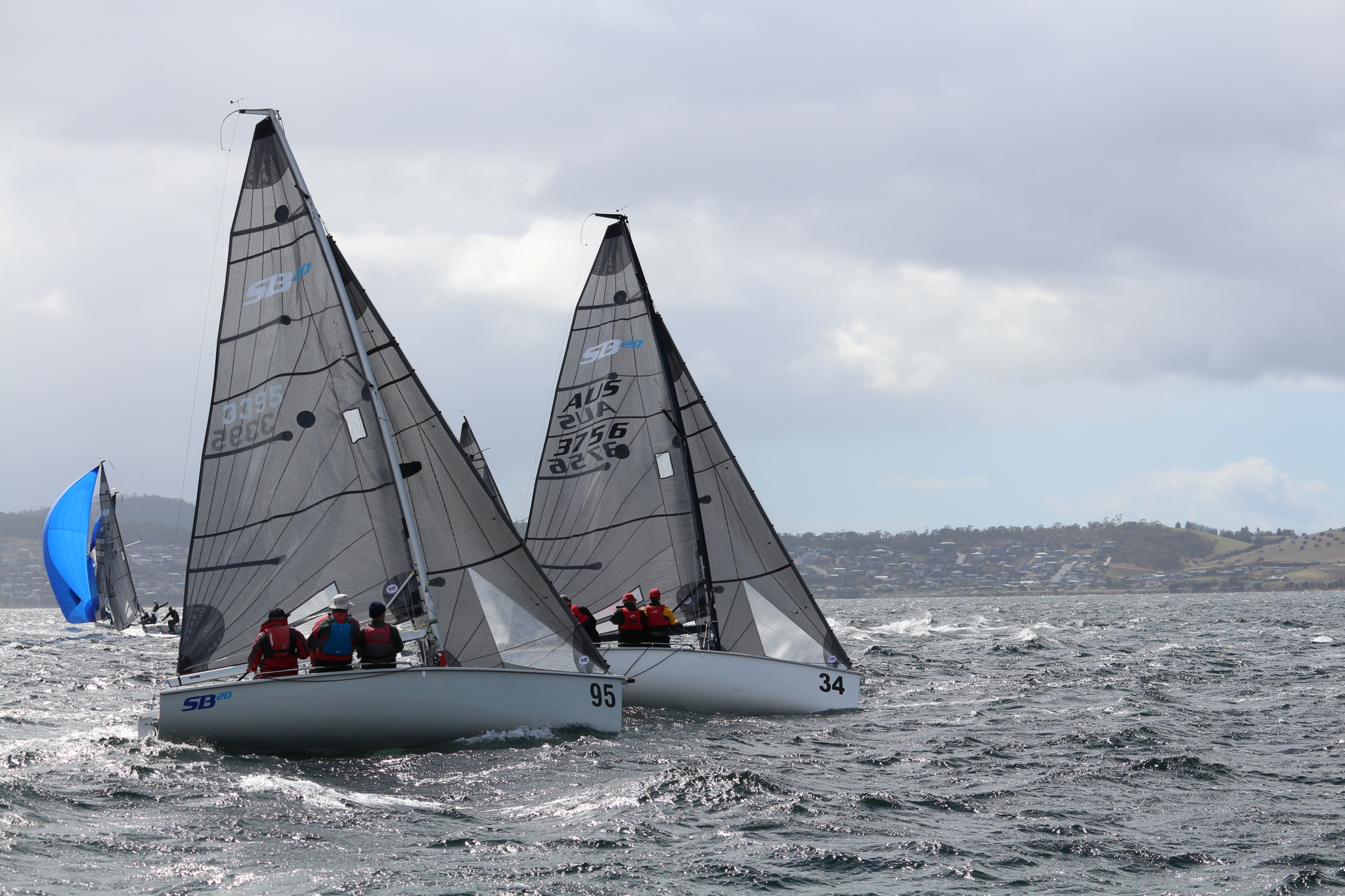 A chilly sou’wester howling down from a snow-capped mountain at 30 knots, along with visibility-reducing rain showers, and hail was not conducive to pleasant and safe racing in the BMW Showdown this afternoon.

Wisely, principal race officer Nick Hutton ‘pulled the pin’ early for all courses as the sou’wester blasted across the Sandy Bay waterfront.

The SB20s had sailed two good races, while Lasers, Laser Radials, 29ers, B14, NS14, Moths and Sharpies had, at that stage, completed three races on the A and C courses.

The Sabots, Optimists and 2.4s also came ashore, but with the breeze easing, C course race officer Murray Jones decided to take the fleet out again on a course close inshore in Sandy Bay.

In all classes on A and C courses, only a point or two separate the top two or three boats at the end of day one, underlining the quality of sailing in Tasmania, particularly in strong breezes.

Competition was particularly keen in the SB20 class with the Nationals and World Championships to be sailed on the Derwent this summer.

World champion runner-up Michael Cooper in Export Roo (3-3 placings) has a one point lead over Rob Gough in Difficult Woman (1-6) and Nick Rogers, helming Karabos. Another point back are Fraser Read in Pinch (7-1) and Paul Burnell in The Honey Badger (4-4).

Heading the NS14 fleet is Spinifex (Peter Davis), two points better than The Avengers (Jason Followes), while in the 29ers just one point separates Jeff (Will Wallace) and Skiffy (Ethan Galbraith).

There is also just one point between Max Gluskie (Big Gun) and Great Success (William Sargent) in the Laser Radials while in the 4.7s, Finn Potter (Dragonfly) and Abbey Calvert (Rapid Fire) are equal on points, both notching up a first, second and a third.

The B14s obviously found the wind too strong today with On the Edge (Andrew Jones) winning two of three races.

The International Cadet fleet was smaller than usual, with Archer Ibbott sailing Little Devil to four straight wins, as did Stephen McCullum in Low Life in the International.2.4 class.
Launceston sailor Ruby Edmunds, helming Not Today!, holds a one point lead from Daniel Maree (Loose Cannon) in the Sabots.

Saul Davidson had a good day in the Bic Open sailboards with three wins and a second while Stephen McCullum won all four races in the Intl. 2.4s

The two Sharpies and the two foiler Moths gave a brilliant display of high speed sailing – 25 knots+ by the Moths. Rohan Langford won all three races in the Moths; Drew Latham had a 1-2-1 score in the Sharpie contest.