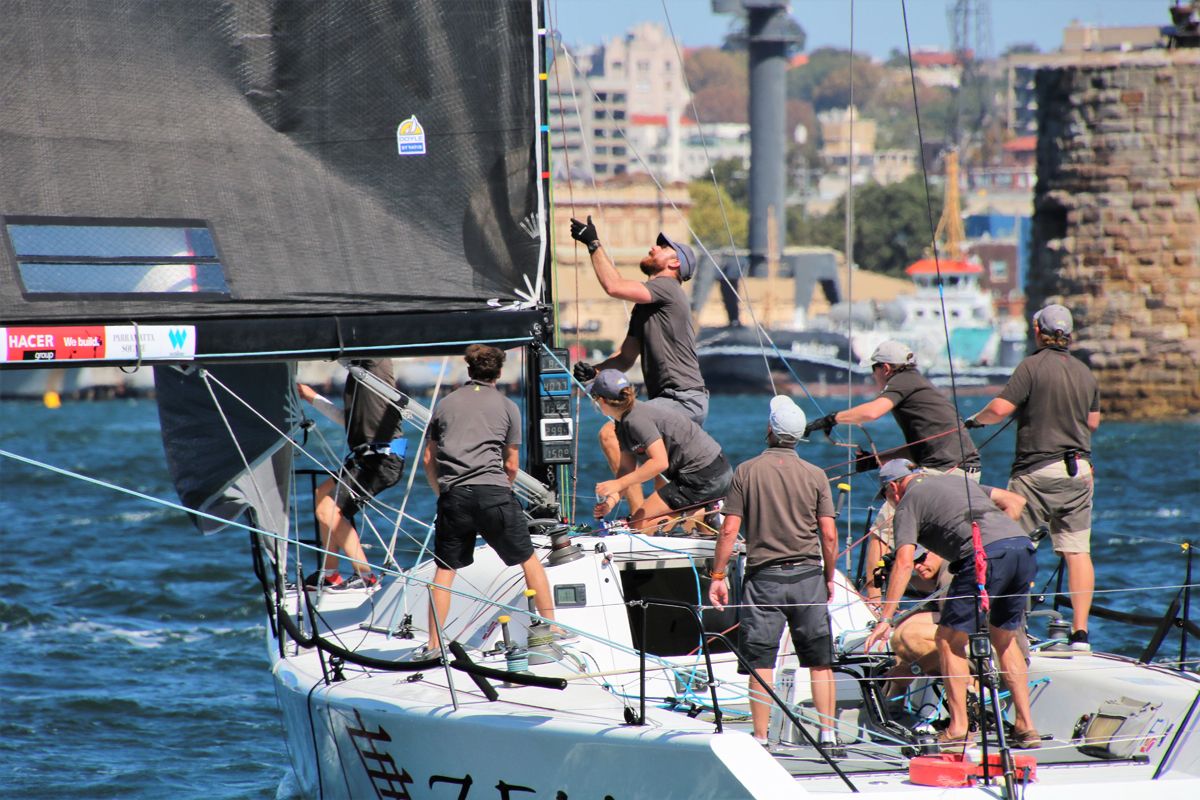 Blistering autumn temperatures of 38 degrees and gusty nor’west winds on Sydney Harbour punished Farr 40 crews over four races and spat out those suddenly stranded on the wrong side of a shift on day two of the class’ national title.

Rob Davis and Andy Baker’s Melbourne based Nutcracker, third in the series after six races with a day to go, went from hero to zero in races four and five.  “We won race four then sailed out of the breeze while the rest of the fleet was in 15 knots in race five,” said Baker. “We finished a good half a leg behind the last boat; it was one of those days.”

Martin Hill’s HillPDA Racing credited Olympic and America’s Cup winning tactician Tom Slingsby for his ability to continually manage the nuances of a hot NW wind, the breeze bouncing from 10 to 25 knots in the duration of a single leg of the windward/leeward format.

“I’ve never known it to be so hot; we drank all our water plus reserves and we are all so parched and tired,” said Hill. “Hats off to Tommy. It’s frustrating when you have NW breeze because it comes in in different strengths. Today was a tactician’s nightmare but Tom did a brilliant job of playing the percentages and the crew responded to the day’s physical demands, and that put us into first position. Tomorrow is looking light and variable; I’d rather be in our position than anywhere else.”

Gordon Ketelbey’s Zen backed up Saturday’s series lead with a bullet in the first race on Sunday March 18, and closed out the day with a second to be second overall, three points within reach of HillPDA Racing.

“Gordon is really sailing aggressively,” praised Hill, the reigning national champion. “When conditions get up to 25 knots and these boat gets up on the plane they are very strenuous to helm. Gordon held it all together. Congratulations to him and his team.”

Nutcracker has the fire-power of America’s Cup sailor and past Etchells world champion Ben Lamb on board as tactician. The combination of Lamb, the two owners and core Melbourne crew plus couple of Sydney ring-ins is melding into solid challenge for a trophy placing, which would be their best result since joining up with the dominant Sydney fleet two seasons ago.

“It’s all coming together for us,” said Baker. “We’ve put in a fair bit of work in over the last couple of years; we knew eventually we’d string a good day together and we are wrapped to be mixing it with the good guys. It was hot, windy, and fluky coming out of the west and there are some tired boys and girls looking forward to an early night.”

Forecast conditions are dubious for Monday March 19, the final day of the 2017-18 Farr 40 National Championship: John Calvert-Jones Trophy. Overnight southerlies 20-30 knots may have all but petered out by the scheduled start of race seven, at 1100hrs, then teams can expect a dodgy transition period before the wind clocks left and afternoon sea breezes reach the course.