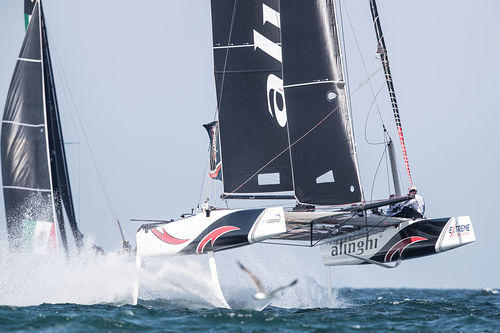 The crew of three-time Extreme Sailing Series champion, Alinghi, were crowned winners of the opening Act of the 2018 Series today, their first win in Muscat in their eight-year history in the event.

After four days of consistently strong sailing in Oman, the Swiss team extended their lead on the fleet of super-fast foiling GC32s, closing the Act with a six-point lead.

Co-skipper and helm, Arnaud Psarofaghis, was elated as his team stepped off the water. “We gave it our all on that last one and it paid off. We knew the Act would end in that final race, and we're really happy. It's the only time we beat SAP Extreme Sailing Team today, but it was the right time to do it,” he said.

Locked in a fierce battle with the Swiss, Danish-flagged SAP Extreme Sailing Team stormed through the fleet in today's racing, finishing within the top three in all races but the last. For the 2017 victors, it was a bittersweet end to Act 1.

Helm Adam Minoprio commented on falling at the final hurdle: “When it counted in the last race, we messed it up,” he said.

“We had the Act there for the taking. It was down to who won the last race, that's all we had to do. I'm pretty disappointed with myself. We sailed a perfect day until then. We made a silly time-on-distance error that made us late to the start line, giving Alinghi the Act.”

Helmed by three-time Extreme Sailing Series champion Leigh McMillan, the British squad – Land Rover BAR Academy – stole the show today. Having started the Act with some disappointing results, the team threw their all into the final three races of the day, topping the leaderboard in the competitive double points round.

Skipper Will Alloway was proud of his crew: “We had a tough start to the event today,” he said. “We really began to push those top positions on the racecourse and finally we got two bullets in the last few races – we're really chuffed with that. We're a new team coming together, so we're pretty pleased with how it went.”

Following their collision with NZ Extreme Sailing Team on the Act's penultimate day, Red Bull Sailing Team charged into day four, determined to claw back some points after an incident that took both boats off the water. Top-three finishes in four consecutive races saw them climb one place on the overall leaderboard.

They may finish Act 1 in fifth place, but skipper Roman Hagara was in high spirits: “The race wins here and the improvement today was really good. We were fighting with the top three boats at first. When you beat them on the racecourse it's always great,” he summarised.

“It was a bit of a hard day for us,” explained skipper Phil Robertson. “We really struggled and had the boat in the wrong configuration all day. We were a bit behind the eight ball and we just didn't manage to get in the groove.”

As the curtains close on Act 1, Muscat, the teams are now reviewing their performances after four days of intense competition. It won't be long until they're ready for another epic on-the-water battle and the GC32 World Championship at Riva del Garda, Italy, is just around the corner.

There was little change to the overall rankings on the Flying Phantom racecourse today. Zooming around the racetrack, Team France Jeune maintained their lead and took the Act victory, finishing first for the fourth time in Muscat.

The team's helm Solune Robert reflected on some first class competition on the water. “We had a tough fight with Red Bull Sailing Team. Thankfully we won, but during racing it was very hard to stay first. There was a lot of pressure out there.”

The Flying Phantom Series will re-join the Extreme Sailing Series in Barcelona from 14-17 June, following their second Act in Quiberon, 18-21 May.