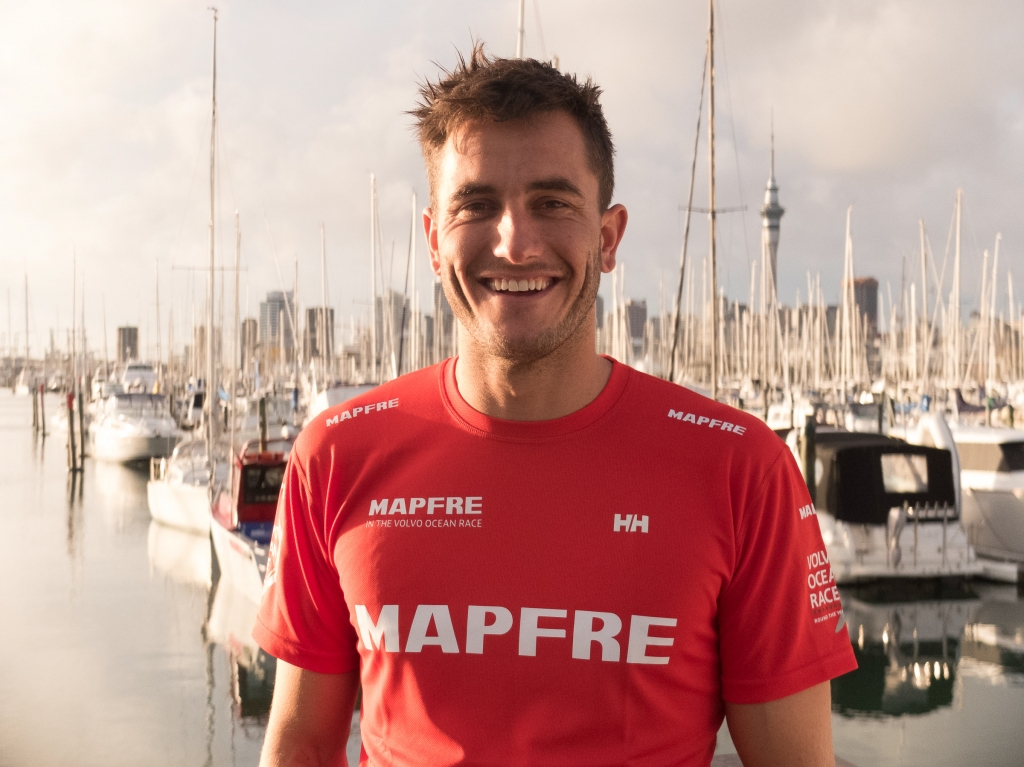 At the age of just 27, the Kiwi is already one of the most decorated sailors in the world – and joins the Spanish campaign fresh from New Zealand’s victory in the America’s Cup last month and an Olympic gold medal in 2016.

Tuke, who has also won four consecutive 49er world championships and was named ISAF Sailor of the Year in 2015, links up with MAPFRE skipper Xabi Fernández to take on the ultimate test of a team in professional sport – a 45,000 nautical mile race around the planet.

“The idea of doing the Volvo Ocean Race is something I’ve been very excited about ever since I was a little kid. Everyone closest to me has known I’ve wanted to do this race for so long, even before I did the America’s Cup and the Olympics. I’m so happy to finally have the opportunity – and to do it with MAPFRE is something I’m really looking forward to,” said Tuke.

“I’ve raced with Xabi a lot in the 49ers and when the race came to Auckland in the 2014-15 edition, I went on board MAPFRE for the In-Port Race and the start, so I’ve seen them in action close up. The team has a lot of really good guys on the boat and I think it’s a great opportunity for me. I’m really happy to be teaming up with MAPFRE.”

The race will be Tuke’s first competitive foray offshore, and with the One Design Volvo Ocean 65 boats set to race three times more Southern Ocean miles than in recent editions, it promises to be a steep learning curve.

“I’m under no illusions as to the learning curve I’ve got in front of me – I know what it’s like to be out there and offshore, but to do it at this high level of a race is going to be new to me,” continued Tuke.

“The thought of racing into Auckland, and then leaving again for the Southern Ocean, is pretty exciting, but before I get there I have to do a lot of learning, and gain more experience in how to make these boats go fast.

“I’m excited for the challenge – I’ve loved being challenged in the past, and having to learn fast, and I’m really looking forward to this one.”

Securing his spot in the Volvo Ocean Race caps an unforgettable 12 months for Tuke, who scooped an Olympic gold in the 49er class at Rio 2016 alongside his long-term sailing partner Peter Burling.

The pair took first place with two races to spare, boasting a 43-point margin over their nearest challengers – the biggest gap in any sailing class since modern scoring began – to add to a silver medal achieved at London 2012.

Burling and Tuke then played an integral part in Emirates Team New Zealand successful America’s Cup campaign, winning them a second major trophy in less than a year.

“It’s awesome to see how the whole country gets behind the Volvo Ocean Race. It’s got the Kiwis’ hearts just because of the incredible history in the race. It’s a great time to be heading to there – the reception that we’ve just received with Emirates Team New Zealand shows just what top-level sailing means to people across the country.

“Seeing all the boats out there in the harbour as we took the Cup out and did a little tour was really cool, and it’s the kind of thing you only usually see when the Volvo Ocean Race comes into town, or when the Cup was in New Zealand last time. Sailing is very much on the map and it’s going to be an incredible Volvo Ocean Race stopover in 2018.”

Since 1973, winning the Volvo Ocean Race has been an obsession for the world’s best sailors, desperate to prove that they have what it takes to claim glory in the pinnacle of offshore sailing.

MAPFRE skipper Xabi, who also boasts an Olympic gold and silver medal, has spent the last decade chasing victory in the Volvo Ocean Race – and has packed his squad with highly-experienced and decorated sailors ahead of the 2017-18 edition.

“Blair is a really exciting sailor for the team,” explained Fernández. “Nobody can doubt his talent, and I am absolutely convinced that he will be a really strong addition to the team as trimmer and helmsman.”

“We first met Blair in 2010, when we raced against Peter Burling and Blair in the last World Championships we participated in. Then, in 2012, when we were in Auckland with the Volvo Ocean Race, we trained with them in a 49er on our rest days preparing for the London Olympic Games,” explained Fernández.

“In 2014-15, he joined us on MAPFRE sailing in a ProAm, and on the start day he was our ‘jumper’ for the leg start – and he told us then that he wanted to one day take part in the Volvo Ocean Race.”

Pedro Campos, CEO of the team, said: “It's excellent news that Blair has joined us – there is no doubt that he is one of the great names of our sport at the moment. “The fact that he has accepted our invitation to join the team makes us proud and demonstrates the international prestige that MAPFRE holds across the world.

The race departs from Alicante on 22 October 2017 and takes in a total of 12 Host Cities around the world, finishing in The Hague at the end of June 2018.