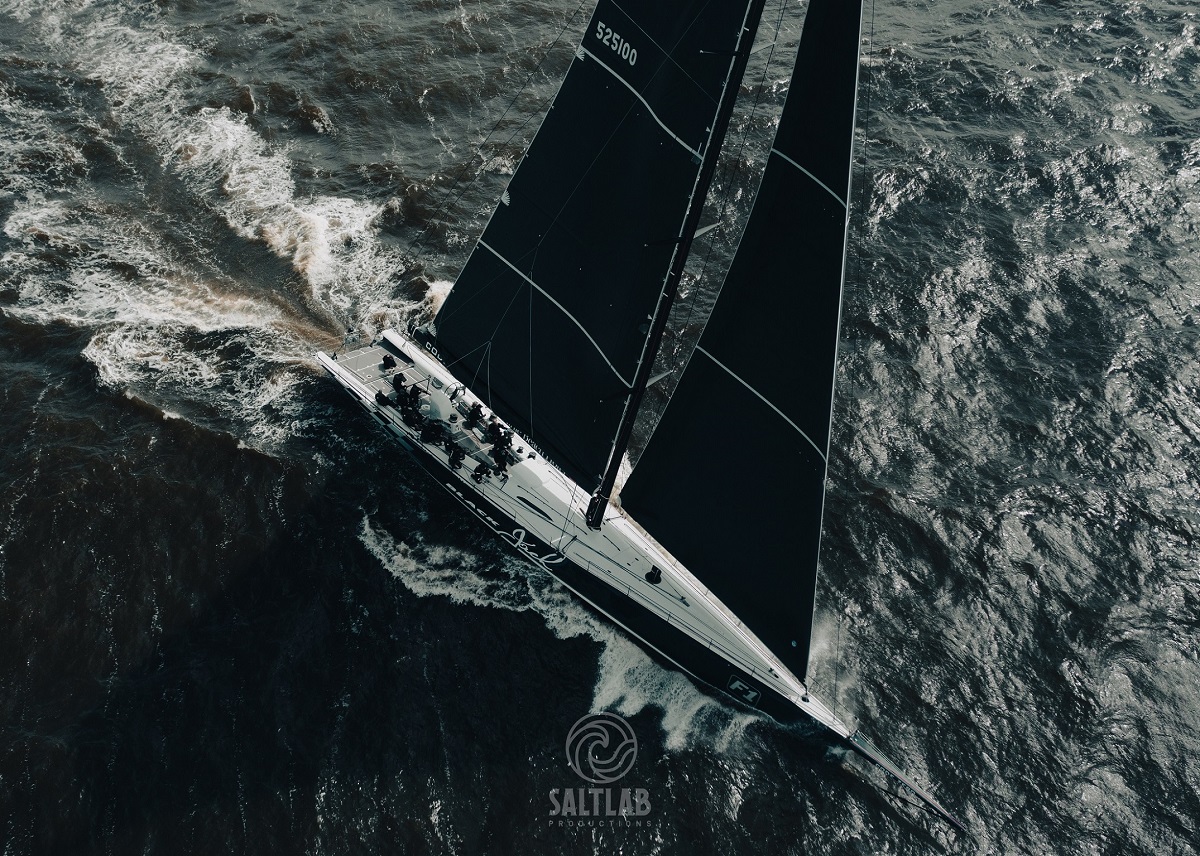 Black Jack won all before her - Saillab Productions pic

In the hands of Harburg’s long time skipper, Mark Bradford, Black Jack clean-swept the trophies, also winning IRC, ORCi and PHS classes in a race where the weather decided in favour of the big boat.

“It’s so good that this race is back on the calendar,” Bradford said. “It’s pretty cool to win everything across the board too. It was a great test against fantastic competition.”

On the tactics employed, Bradford explained, “When you close in on Coffs you have to time jumping into the westerly. We had a really smooth transition. It was pretty easy for us in the end, because the breeze lightened behind us, making it harder for those behind us to win. ”

Overnight the rest of the fleet battled the clock in attempts to beat Black Jack for the overall win. There were a handful of boats in contention at any given time, but as time ticked by, none were successful.

Ian Short’s TP52, Fifty Two Hundred finished second IRC overall, having sailed in the top four for the majority of the race, as had the Mark Griffith skippered LCE Od School Racing, which claimed third place overall and won Division 2 from Pretty Woman and Sail Exchange.

Griffith recounted their race: “It was a tough one. Very shifty. The guys worked hard and were constantly trimming. It was quite tactical too. Pretty Woman kept us on our toes. We had very close racing with them. At times we were only metres apart.

“We had a good tactical and consistent race and didn’t take too many risks. We had nice transitions too,” he ended.

It’s been a while since Ichi Ban has been beaten on the race track, but this time around, Matt Allen had to settle for sixth place overall. Richard Hudson’s Pretty Woman and Carl Crafoord’s Sail Exchange also finishing in front of her in fourth and fifth overall respectively.

“My son and I are new to double-handed sailing. We’re on a steep learning curve.,” admitted Martin Cross, who is doing well at club events at the RPAYC. “This was our first go against outside competition.”

On winning, Cross said, “I’m lucky to have a good boat that goes well in reaching conditions. It’s not optimised to go to windward, but in the end we managed to get the gennaker up and the boat kicked up its heals. When we got around Smoky Cape, we experimented with a J2 gennaker and decided to go offshore, which brought us more wind.

“On the final leg to Coffs, we listened to Clouds’ (Roger Badham) weather forecast. What he said is exactly what happened, so we had a very quick transition through the westerly and held the gennaker all the way to the finish.

“It’s satisfying for us to win early in the learning curve. It was also a good father and son bonding session. We’re very pleased, as new boat, to do so well.”

Gordon Beath’s Roamance took multihull line and overall honours. The Chamberlin 14, representing Cairns Yacht Club and a new member of the RPAYC, was the lone multihull in the race. The normally live aboard boat was stripped down for the race.

“It was it was a great race for us made better with the result against our monohull friends. It’s all about sailing for the team and we loved it,” Beath said.

In closing, McClelland said, “Races like this don’t just happen. We have a great team of volunteers from RPAYC and CHYC helping behind the scenes. We thank them, and Coffs Harbour Yacht Club Commodore, John Waite, who has either sailed in or been behind the scenes of every Coffs race.”

“Thanks go to our sponsors, Club Marine and Fevertree,” he said.

“Finally and most importantly, thank you to the owners and crews for supporting this ocean race.“

Video highlights of the start: at: https://youtu.be/7NreiurSPyE