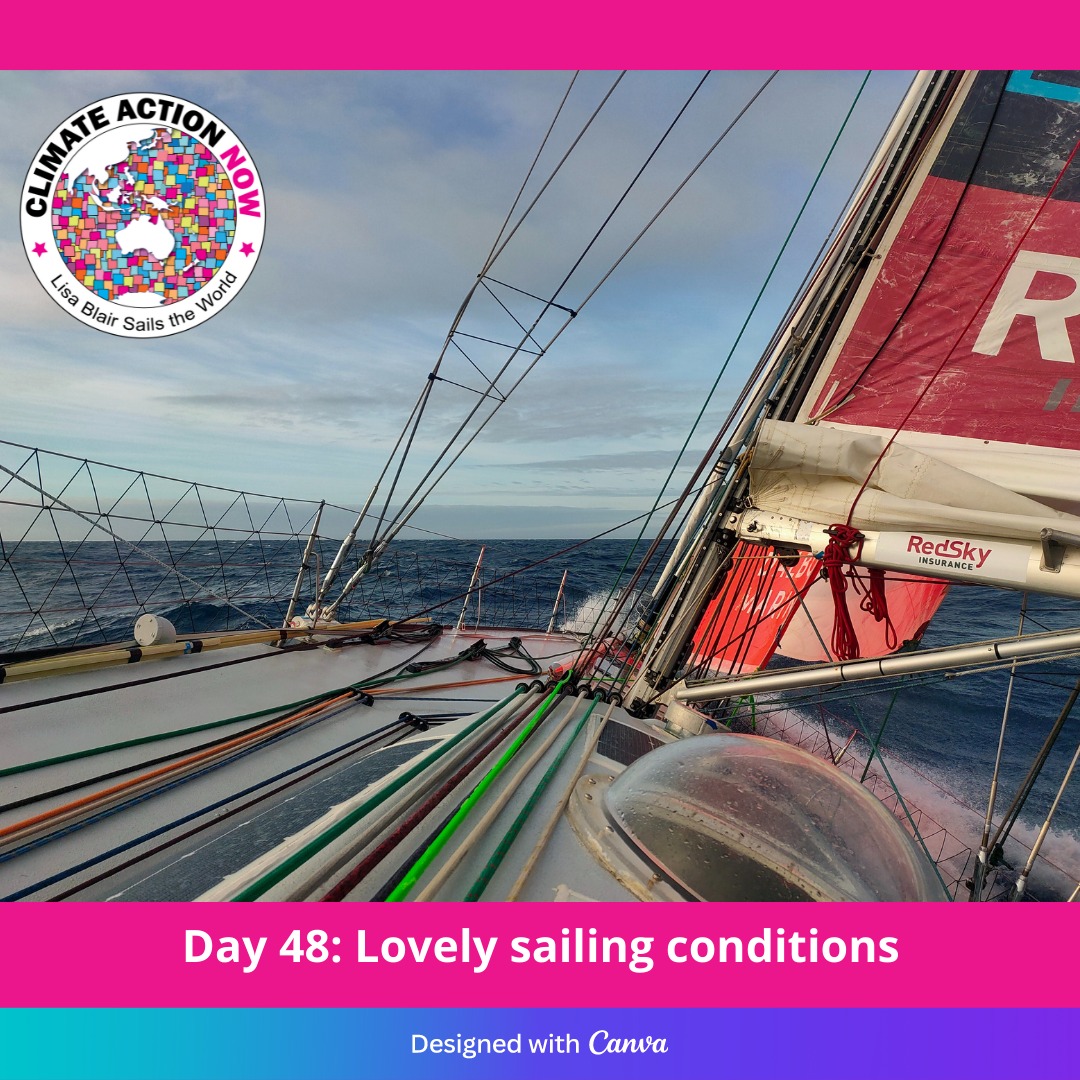 In her latest blog post, it was another day on the high seas for Blair – plenty of sail changes in the close to sub zero climate.

I hope it is a lot warmer where you all are, while today was two whole degrees warmer then yesterday it is still freezing. Just so cold that I cry from the pain in my hands during sail changes. Yesterday, I eventually got to bed by 10am, and because I don’t feel that I have cleared the main shipping and fishing boats yet, I am still doing short naps in blocks of sleep to make sure I can keep an eye on things.

I am also sleeping during the daylight hours, so it is easier for a ship or boat to spot me and radio if they need to. Although that crackled to life twice while I sailed around Cape Horn, and that was it. It has been complete radio silence for the rest of the trip.

I managed to get in a three-hour block of sleep before the winds started to build.  All night I had been sailing in 15-20 knots with the full mainsail, the number 2 jib, and I still have the storm jib up. I was expecting the winds to build throughout the day and into the next night as a cold front passed over us.

Around 2pm local time the winds started to build to 25 knots and occasionally touching 30 knots. This is well past what the full mainsail should take, and we were having trouble holding a direct course, so I dragged myself out of bed and went on deck to put the first reef in the mainsail. As soon as I was done, we balanced out again and were humming along at a great 9-13 knots of boat speed.

Normally in those winds and with the denser air of the Southern Ocean I would be at least on my second reef and have most of the No 2 jib furled away, but today it was a dream. We had great winds and almost no swell and it felt like I was sailing across enclosed waters.

We are still in the lee or shelter of South America and this has prevented any of those really large rolling waves from coming around, plus we had just been sailing in light winds so the fetch or new swells haven’t yet had a chance to build into something larger.  Because of this we were able to push a bit more with the sails and not wipe out with round ups or knockdowns and I was able to go below and try for a few more hours sleep.

A final glance around at the horizon and you could actually see the front coming. I knew that it was going to get a little windier. There was this band of cloud filling in from the west and to the east the clear blue skies that I had been enjoying that morning were fast running away. I have always found it interesting when you can actually see the pressure changes by observing the conditions around you.

When I am on a long voyage like this, I get so in tune with the wave formations and the clouds that I can get a fairly good idea of what’s coming by simply looking around. Back below and I wasted no time climbing back into my bunk and attempting for some more zzzs.

By 7pm local time the winds were starting to push past 35 knots and I still only had the 1st reef in the mainsail. I had managed a bit of sleep and now felt slightly human, but far from rested, however I was needed back on deck so up I went.

It was a lot colder being dark already, and I moved about and put the 2nd reef in the mainsail as fast as I could. The seas had now built up to three metres, but they were still not breaking or shoving us around too much, so once the second reef was set and in less than 10 minutes, I was back inside trying to get warm again.  I dived right back into my bunk after filling out the logbook but I was too awake now.  I tried to doze and rest until I ultimately give up an hour later and just read a book in bed to at least rest my body.

I needed to do a sample change at 11pm so I surfaced then, and after that I made some hot porridge before doing a little spring clean around the boat. It really needed it after all the bad weather leading up to Cape Horn and then the exhaustion afterwards.

I had let things slip a little, so I went around and sponged dry every bilge in the main cabin and sail locker before spray and wiping all the handrails and general surfaces and emptying out the bin. It took nearly three hours, but by the time I was done I felt a lot better, just in general, and a lot more in control of everything. I still need to get into those maintenance jobs, and I am hoping that after some sleep tonight I can tackle them in the easing winds on Monday before the next front arrives.

All in all though, we are going along pretty well, all things considered. I am happy with where everything is at for now.  Tomorrow Monday at 11am I am going to be doing a live cross to Studio 10 from the boat so if you are near tune in.

I would normally take this moment to thank today’s degree sponsors, unfortunately there isn’t anyone for today so instead I would like to do a huge shout out to my primary and principle sponsors:

Canva – One of Australia’s largest tech start-ups in the design space creating millions of templates for your everyday businesses and individual needs.  Thank you for stepping up and supporting this campaign and all the amazing work you do with your motto ‘be a good human’.

Laurus Projects– A Sydney based residential property development company, who after hearing about my project and meeting me was instantly on board to support with a huge focus on the community outreach section of my project.  Thank you Laurus Projects.

RedSky Insurance – A maritime insurance company that is Female led and owned and takes on those ‘think outside the box’ projects.  It has been amazing to have you all aboard for this journey.

If you are interested in supporting this project or the next then please reach out and you can find out more on the degree sponsors opportunity here.  There is still plenty of time to sponsor a degree and help us fill in the last of the required budget.

Thank you everyone and goodnight.