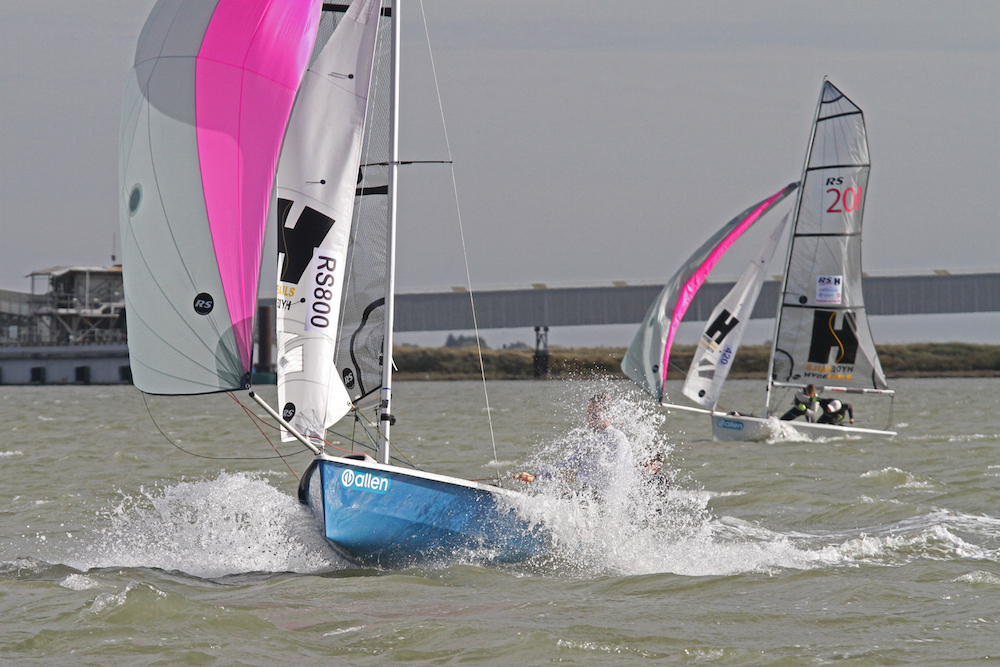 Burnham-on-Crouch, Essex: The effect of Storm Callum currently sweeping across England has done little to affect proceedings at the opening day of the Endeavour Trophy weekend, from 12-14 October.

Although gusts reached well over 25 knots, the on-water session of the Calltracks-sponsored training day continued as scheduled, with most of the 30 super-tuned national champions and their crew reveling in the conditions and enjoying the extra valuable time on the water before tomorrow’s opening races.

Back on shore this afternoon, the champions sat through a highly interesting video debrief, headed by Steve Irish, former champion/Endeavour competitor, and coach.

In a bid to ensure racing is based on a level playing field, competitors use equally matched one-design RS200s, and are loaned brand-new sails courtesy of RS Sailing and Hyde Sails.

By dint of their achievements, the champions at this high profile event to establish the champion of champions’ tend to be experts with transferable skills, which means they are able to adapt to different classes without too much trouble. However, the Endeavour Training session on the Friday is always useful for teams, particularly those unfamiliar with the boat.

Irish commented: “One of my main objects today is to help those new to the Endeavour Trophy and those new to the RS200 class in particular, because they have to learn about the boat quickly.

“The weekend is going to be generally windy, it is therefore it is important the crew ensure they have the correct rig setting, so they can actually sail the boat efficiently.”

Back at one of his favourite events, Ben Saxton – three-time/reigning champion with Toby Lewis – chatting in the dinghy park today, said he was happy to be at the event once again.

“I am really looking forward to it, but is going to be tougher than ever, and I love the fact it is going to be windy. It’s the best weekend of racing, and also such great fun.

“The Endeavour Trophy is a true celebration of every champion taking part, and a great battle on the water. I can’t wait to celebrate and enjoy the weekend with every single competitor and volunteer!”

Chatting about the profile of the event, Craig said, “We are very much looking forward to the Endeavour as it is still so prestigious and attracts the top talent in the UK.

“The event is so well run on and off the water. With eight tough races, it feels like a weeklong championship in a weekend. I only wish racing was like this every weekend!”

Christian Birrell – former Endeavour Trophy winning crew – is also back, this time as the winning helmsman of the highly competitive Merlin Rocket class national championship, with Sam Brearey at the front end.

The number of youngsters competing this weekend is impressive, with the likes of local hot-shots Ben and James Hutton-Penman (RS Aero 5), racing the Endeavour for the second year running.

Other youngsters to watch out for include Emily Mueller/Florence Brellisford (Optimist), Angus and Hattie Collingridge (Cadet), and the 420 boys – Rhys Lewis/Drew Wright from Penarth, Wales.

Commenting on the prospects of big winds, Lewis said: “We are definitely a bit heavy in general for the RS200 so we are delighted there is going to be a good breeze. We are absolutely ready for it.”

Edwin Buckley, the event director and race officer, said he had concerns about the strength of the wind today and whether it would be possible to send the fleet out: “Thankfully the wind abated enough for the competitors to enjoy some valuable time on the water,” he said.

“Having Steve Irish as our Trainer is a real benefit because he has an absolute wealth of information to impart to all our national champions and the video de-brief session this afternoon went exceptionally well.”

Buckley concluded: “The Met Office is indicating a decrease in wind. Yes the gusts are still 25 knots, but we’ll have low tide first thing in the morning. So hopefully launching will be easier and crews can sail up to the race area out to the east, in the lee of the south bank

“We should get some good racing up and down the River Roach. The wind is predicted to be more southerly, so it will be a fast reach down there and then we can crack on with some good racing.”