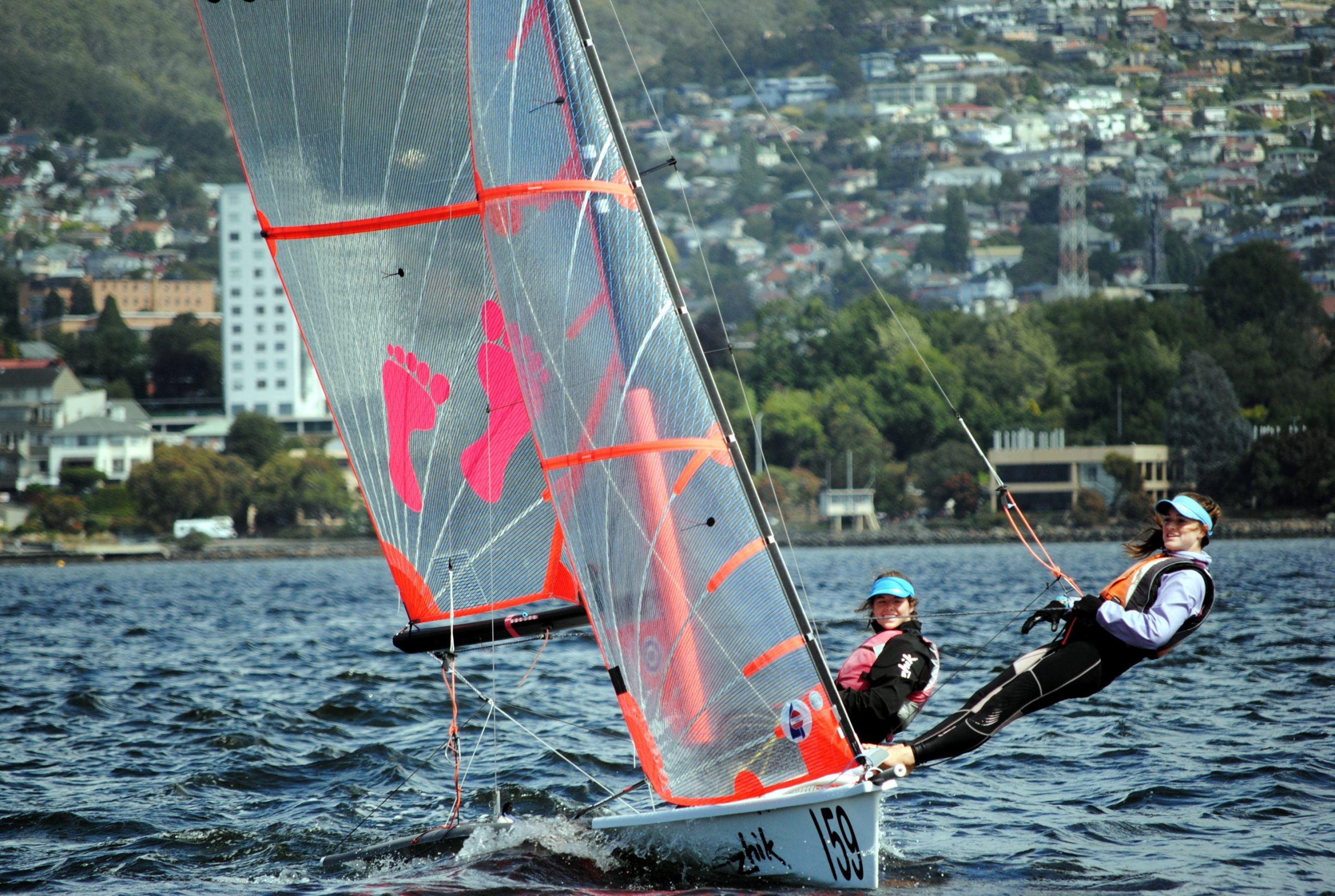 Chloe Fisher on trapeze of a 29er on the Derwent with Sam Bailey on the helm. Photo Angus Calvert.

Tamar River sailing siblings Chloe and Bayley Fisher have a big weekend-plus of high profile sailing ahead of them – Chloe in China, Bayley in Hobart.

Chloe (18) and Jasmin Galbraith are representing Australia in the 29er skiff class at the 2017 World Sailing Youth Championship at Sanya, China, which starts on Saturday, 8 December.

Bayley has joined champion Hobart sailor Paul Burnell, his sons Oli (19) and Toby (18) as a fourth (and lightweight) crew member of their SB20 high-performance one-design sports boat, The Honey Badger.

Starting tomorrow (Friday 8 December) The Honey Badger is among the favourites in a 36-boat fleet contesting the SB20 Australian championships on the River Derwent over the weekend.

The Nationals are key lead-up to the World championships on the Derwent in early January 2018.

Chloe has just completed Year 12 at Launceston Church Grammar where she was co-captain. Bayley is 15 and is just finishing Year 9, also at Grammar.

The children of prominent Launceston yachtsman Richard Fisher, Chloe and Bayley began their sailing in Optimist dinghies with the Tamar Yacht Club at Beauty Point.

They are now members of the Derwent Sailing Squadron and Sandy Bay Sailing Club.

Bayley has also just started sailing a Waszp, the production foiler version of the Moth, arguably the fastest single-handed sailing dinghy in the world…

As soon as the girls get back from China, they will go to Brisbane for the 49erFX Nationals (26-31 December), then both Chloe and Jasmin are off to New Zealand in late January to sail the Olympic 49erFX.

Their boat is expected to be shipped to Europe for a number of FX regattas there in 2018.

Bayley will continue training with the Burnells for the SB20 Worlds being conducted jointly by the Royal Yacht Club of Tasmania and the Derwent Sailing Squadron.

A fleet of more than 60 boats, including at least 20 overseas entrants, is expected for the Worlds, from 7-11 January.