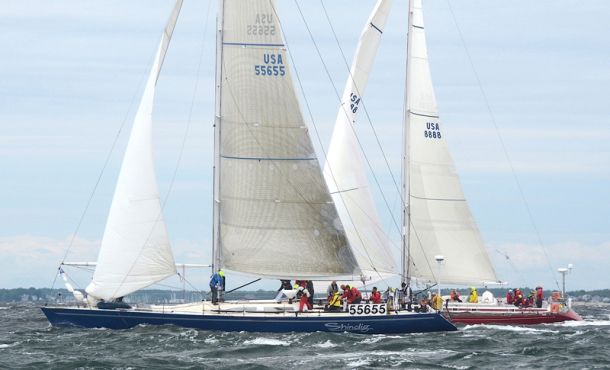 Shindig and Lady B in the 2013 Marion to Bermuda Race. Photo © Talbot Wilson.

There’s a lot going on this week as more than 45 cruising yachts prepare for the 20th Marion Bermuda Cruising Yacht Race which takes off from the starting line off Centerboard Shoals outside Sippican Harbor in Marion Friday.

Tonight the 'Spirit of Bermuda', a 118-foot three-masted schooner used for youth sailing programs in Bermuda will berth at State Pier in New Bedford for a media reception and tour. The Royal Hamilton Amateur Dinghy Club of Bermuda, along with the Beverly Yacht Club and the Blue Water Sailing Club sponsor the biennial race which takes competitors 645 miles due south, crossing the Gulf Stream before finishing at St. David’s Light off the shores of Bermuda.

There’s a dinner and reception for visiting Bermudan officials and sailors on Wednesday, June 17, at the Beverly Yacht Club (reservations required). Following the skippers’ meeting on Thursday, the BYC hosts a crew grill and picnic.

First signal outside Sippican Harbor is at 11:30 a.m. Friday.

BYC Commodore Larry Hall had this advice for this year’s Marion Bermuda racers: “Whether it’s a beat or a run down Buzzards Bay, then the rounding of the Sow and Pigs buoy as you head out to sea, you will be off on a great adventure.”

Past Marion Bermuda races have drawn as many as 170 or more boats, but the numbers have dwindled in recent years. Fifty boats entered the 2013 race, with several retiring before the finish.

Priscilla Stoll of the Massachusetts Maritime Academy will skipper an all-female crew on one of two MMA entries, Spirit, a J-44. Charlie Cahill will steer the other MMA entry, Mischievous, a Meriden 65. The U.S. Naval Academy has two entries: Defiance, skippered by Jared Valeske and Integrity, skippered by Tom Wester, both Navy 44’s. Anne Kolker of Tiverton, Rhode Island, is back skippering Etoile, a Stellar 52-ft. sloop.

In the last Marion Bermuda race in 2013, Shindig, an Andrew 68 from Mass. Maritime, crossed the finish line first in the wee hours of Tuesday, four days into the race.