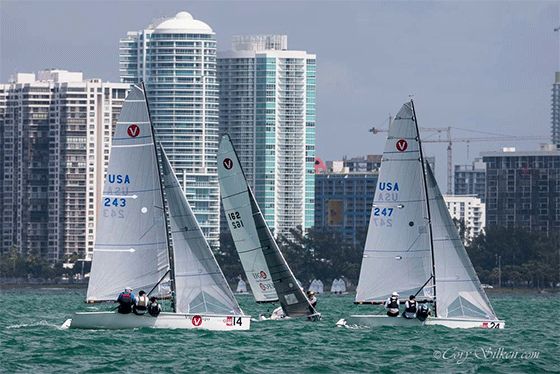 The Viper 640 sportboats are just returning from Miami, FL, after sailing two regattas on Biscayne Bay. The first, the EFG Winter Cup (March 6-7), was the final qualifying regatta for the 2015-16 EFG Viper Pan-American Championship, a 12-month series of international qualifying regattas held in Europe, Australia and North America. As in the past, the EFG Viper Pan-Am was sailed as part of Bacardi Miami Sailing Week (March 10-12) sponsored by EFG with each competing boat carrying over qualifier regatta points to be combined with their Bacardi scores.

This year, Lawrence Crispin, sailing with his son Luka and long-time crew Hector Cisnaros, won both the EFG Winter Cup and Bacardi Miami Sailing Week regattas earning them the title of EFG Viper Pan-American Champions. This is the second year Crispin and crew have sailed a Viper in Miami having also competed in the 53-boat Viper North Americans last October where he finished seventh. “This is a big win for us,” noted the senior Crispin, who hails from the Stone Sailing Club in the UK and is a former Laser World Champion. “We’ve just purchased a Viper for us to sail when we get back to the UK and will then be shipping it to Bermuda for the 2015 Viper International Championship next November.”

Crispin’s dominance of the fleet was not totally without its challenges. After the first day of the EFG Winter Cup, Royal Cork Yacht Club’s Anthony O’Leary (former Irish Sailor of the Year) held the lead sailing with his son Robert and Tom Durcan. O’Leary finished second for the EFG Winter Cup with former US Star Olympian John Dane III, Schaeffer Dane, and Dave Bolyard in third. Dane and his crew, while not from across the Pond, are new to the Vipers sailing a boat owned by their home club, Pass Christian Yacht Club in Pass Christian, MS, part of the Gulf Yachting Association.

Day 1 of the Bacardi/Pan-Am racing for the Vipers was cancelled due to high winds but the fleet raced eight races over the final two days in winds in the high teens. Crispin won two of the eight heats, was second twice and third twice. That was good enough to beat Tyler Moore (Hampton Yacht Club, VA) by seven points for the Bacardi Miami Sailing Week title. Moore, sailing with his wife Jane and Tim and Karen Fallon, made a strong finish winning four races—including the final three. Rounding out the top podium spots for Bacardi were Ian Nicholson and David Hitchcock from Britain’s Hayling Island Sailing Club with Australian David Chapman as their third.

After all the sailing was over, it was Crispin who took home both individual regatta wins and the title of 2015-16 EFG Viper Pan-American Champion.

With everyone’s eyes turned to the Viper International Championship and 2015 NAs next November in Bermuda, there was a definite international flare to the Vipers in Miami. In addition to the Crispin and Nicholson UK entries, the O’Leary crew from Ireland, and David Chapman from down under, Mark Griffith, Chris Way, and Mark Haywird traveled from Sydney, Australia, to finish a solid sixth in the Bacardi series. And while Canadian Steve Chapman is a staple for Viper regattas, Bill Abbott, Steve Lacey, and Ched Lee were sailing fellow Sarnia, Ontario, Viperer Brad Boston’s boat in their first Viper regatta. And the US was well represented with crews traveling from California, Texas, Alabama, Mississippi, South Carolina, North Carolina, Virginia, Maryland, Florida, Connecticut, Indiana, New York, and New Jersey.

Next on tap for the Vipers is Charleston Race Week (4/14-17) and Tom Loutrel (tsloutrel@gmail.com) and Zeke Horowitz (zeke.horowitz@northsail.com) are managing the process to get more entries. Then, it’s up the coast to the Annapolis NOOD (4/29-5/1). Geoff Ewenson (gewenson@yahoo.com) is driving that effort. Sailors should contact these sailors with any regatta questions.

The Viper 640 is a high-performance one-design sport boat. At 21 ft (6.40 m) and only 750 lb (340 kg) it combines the stiffness of a keelboat with the acceleration and planing abilities of a dinghy. The Viper has a precise and exhilarating feel on the helm, a spacious cockpit for three or more people, strict one-design class rules and ease of launching by ramp or hoist. With fleets and regattas around the world, there is certainly Viper racing near you.