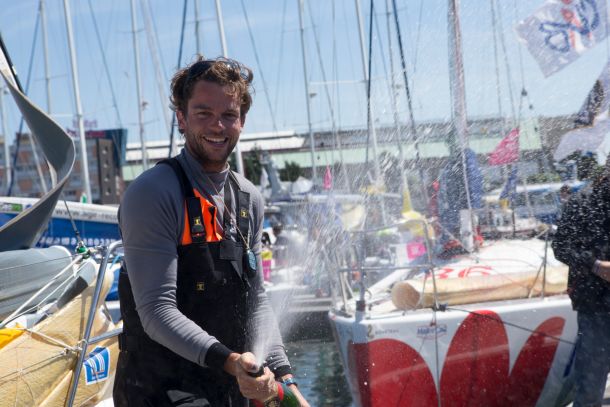 When he crossed the finish line off Cherbourg-Octeville to win the 45th edition of La Solitaire du Figaro overall for the third time Jérémie Beyou, sailing Maître Coq, wrote himself into the solo race's record books, joining only three skippers to have triumphed overall three times.

Delivering almost metronomic consistency over the four stages, Beyou stepped up to win the final 390 miles stage from Les Sables d'Olonne which started on Sunday evening and took the 36 boat fleet via Manacles rocks by Falmouth, bettering his regular third place finishes which the Breton skipper from the Bay of Morlaix had successively returned into Plymouth, Roscoff and Les Sables d'Olonne.

On aggregated elapsed time Beyou won by 17 minutes and 56 secs over the four legs. He started in Les Sables d'Olonne on Sunday night with four skippers within 24 minutes and 02 seconds of his leading, reference cumulative time, Corentin Horeau (Bretagne Credit Mutuel Perfomance) was closest at 15 mins 13 secs behind. But through the final hours Beyou kept his rivals in check and still even managed to win the final leg.

Steering Maître Coq across the finish line, exhausted but elated he crossed 54 seconds ahead of second placed Adrien Hardy (AGIR Recouvrement) and 1 minute and 53 seconds ahead of third placed Corentin Douguet (Un Maillot pour La Vie). His nearest rival for the overall title Horeau finished fourth across the line, 2 minutes and 43 seconds behind him.

Beyou who celebrated his 38th birthday last Saturday, first raced this legendary, addictive solo challenge as a 20 year old. This was his 14th participation – and today his seventh leg win – and the first overall triumph in the colours of sponsors Maître Coq who announced they are supporting him through two further Figaro programmes and a parallel IMOCA Open 60 campaign for the 2016 Vendée Globe after two successive heartbreaking abandonments early in both the 2008-9 race and the 20012-13 race.

He won the 2011 Transat Jacques Vabre with Jean-Pierre Dick on Dick's Virbac-Paprec 3. He proved his form earlier this season by winning the Solo Maître Coq and finished fourth in the Solo Concarneau.

His ability to remain alert all the time, his determination during the tense and wide open finishes in the four legs, his consistency in achieving a good performance and his cool-headed approach have once again been rewarded.

Beyou commented :
“ It was a much harder Figaro for me than previous editions, always getting back into it. The dismasting of Yann (Elies) and damage to Fabien. These are sad but in the end they are opportunities which you have to seize and you have to stay focussed.

“In this end this was a particular, special Solitaire. I stayed focussed and stuck to my goal, to be consistent.”

And he kept his focus when his main title rivals suffered damage which shot their overall chances to pieces, Yann Eliès – who was bidding for three back to back titles – losing his mast while leading leg 1, and the race leading Fabien Delahaye suffering a shroud damage before the start of Leg 3 which cost him more than two hours of delay.

“It was a great last leg. I had two or three problems on board which meant I struggled at first to really push and go with Corentin (Horeau) and I used the pilot a lot to start with. I said that the first thing I had to do was catch Corentin and then keep him behind me. And that was the most difficult part of it, keeping him behind me.

“Then keeping him behind me I lost out a little bit. But no worries.”

Overall after 4 stages. Rookie denoted by star Elapsed time and delta to winner