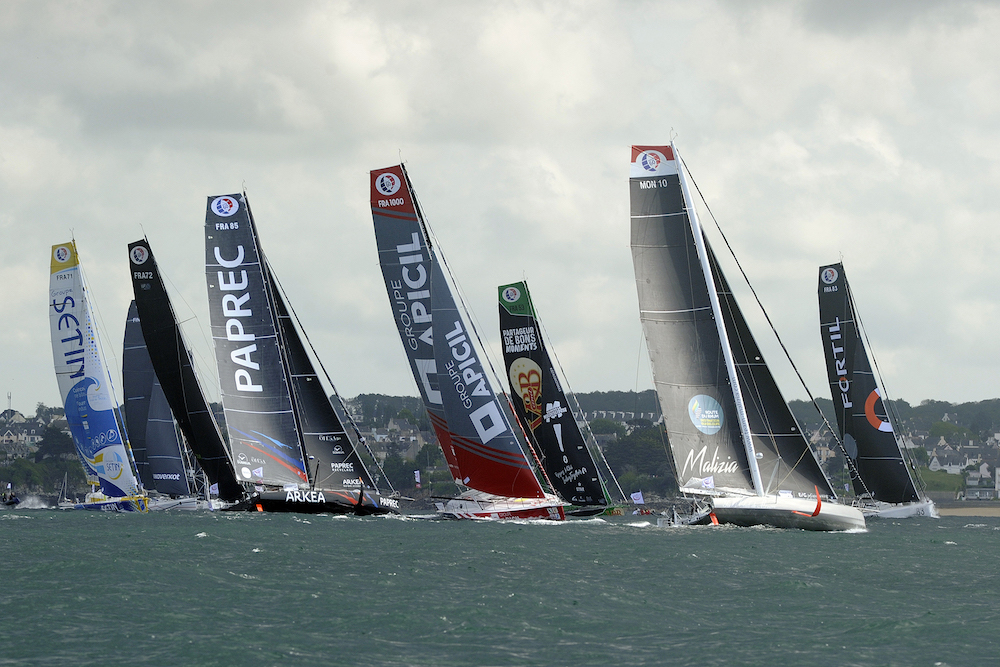 It was at 1700hrs local time on Thursday 9th May that the start was given for the Bermudes 1000 Race, the first event in the 2019 Globe Series. Conditions were ideal for the seventeen sailors competing (13 men and 4 women), with a twelve-knot westerly wind. Ahead of them, 2000 miles of sailing to Brest after rounding the Fastnet Rock to the south of Ireland and a waypoint off the Azores. The weather in this race looks like being a mixture, so could be fairly complicated with the first boats expected to finish in just over a week from now.

A 12-knot wind and a residual swell of less than a metre with sunny periods. They were the ideal conditions for the seventeen skippers in the IMOCA class on Thursday in Douarnenez for the start of the second edition of the Bermudes 1000 Race. Some skippers like Yannick Bestaven (Maître CoQ), Sam Davies (Initiatives Cœur), Sébastien Simon (Arkea Paprec) and Maxime Sorel (V&B-Sailing Together) were a little aggressive as they crossed the line. Others were more cautious, not wishing to take any risks at the start of the race. The sailors made their way out of Douarnenez Bay sailing close-hauled and carrying out several tacks. At the buoy indicating the shallow waters around Basse Vieille off Cape de la Chèvre (in the Crozon peninsula), British sailor, Sam Davies was leading the fleet.

“Unpredictable weather with a lot of surprises in store”

Once they had passed the Cape off Crozon at the tip of Brittany, the sailors were able to point their bows towards Ushant and open up the sails. The wind is set to drop off during the night and they will have a strategic choice to make – whether to go east or west of the Ushant TSS. This is just the first of a series of hurdles, as conditions look varied and complicated throughout the race. “The unpredictable weather means there will be plenty of surprises in store,” explained Sébastien Simon shortly before the start of the Bermudes 1000 Race. “We’ll be scratching our heads trying to make the right choices,” added Damien Seguin (Groupe Apicil), while Arnaud Boissières (La Mie Câline-Artipôle) pointed out, “I’m expecting a lot of manoeuvres and sail changes. It looks like we’ll be going through all the sails.”

The sailors’ impressions before the start of the Bermudes 1000 Race:

Sébastien Simon (Arkea Paprec): “I feel at ease aboard this boat after sailing across the Atlantic as if I had been alone on her. But psychologically, it’s always different when you are really alone… I am used to sailing solo, but not on an IMOCA. I have a lot of progress to make, but I am competitive and will be trying to win.”

Yannick Bestaven (Maître CoQ): “Sailing solo is something I’m about to discover on my new foiler, which seems to be highly competitive. We are setting off in fine conditions, which will allow everyone to build up their confidence. My main goal is obviously to complete the race. But knowing me, I’m sure I’ll get caught up in the race aspect too. Getting to the podium would be a great result, the icing on the cake.”

Denis Van Weynbergh (Eyesea.be): “This is my first major solo attempt aboard an IMOCA. It feels like playing a match in the Champions’ League. The boat is ready and my little team of volunteers has been working hard. I’m tackling this race feeling very happy with the aim of finishing and learning from the experience.”