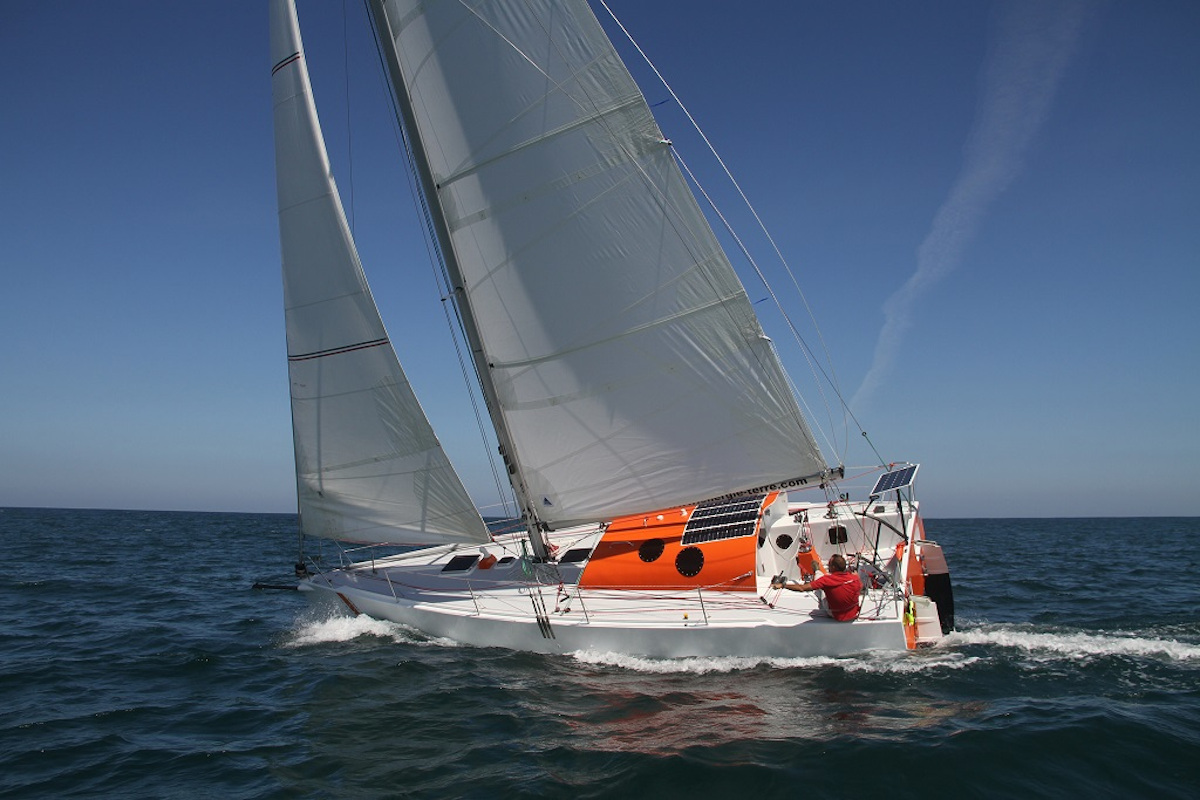 Édouard De Keyser will be competing on a Solaire 34.

Édouard De Keyser from Brussels in Belgium has dreamed of completing a long voyage by sea ever since taking part in the 1989 Mini Transat.

Now that his children are becoming independent, the Global Solo Challenge opens this opportunity for him. He has sailed to the Marquesas in the Pacific from Martinique with his family and his mention of ‘La Longue Route’ sailed by Moitessier suggests his vision embraces sport, adventure and spirit. His campaign will have the preservation of our blue oceans at its core and will promote the best green technologies.

We are very pleased to welcome Édouard as the 45th entry in the Global Solo Challenge, a milestone that we only dreamed of achieving when we launched the event, beating every expectation and forecast.

Getting to the start line of the GSC is an achievement in itself for our participants. The dedication and commitment required to pull off a project of this magnitude are enormous and many factors must align to make it possible, such as family, finances, health and work. Only time will reveal the final line-up for this incredible challenge and adventure.

Where does your passion for sailing come from?

From the time of my holidays in Brittany with my mother and my brothers when I was eight or nine. After that I had the pleasure of sailing many times in numerous places around the world, alone, as a crew and as a family.

The desire to continuously test my limits.

What prompted you to sign up for this event?

Since my Mini Transat in 1989, I have always dreamed of making a long voyage like that of Bernard Moitessier.

The GSC is an opportunity. It’s just falling at the right time for me. I’m 56. I’m still in great shape. My children are becoming independent themselves and I am once again a turning point with my career. And then what’s a career?

Between the Vendée Globe and the Golden Globe Race, I choose the Global Solo Challenge because it seems a smart alternative to me. In addition, A Coruña is a magnificent port of departure and arrival. I congratulate the organisation for choosing such an inspiring place.

How do you plan to prepare for this event?

First, by sailing as much as possible and spending the time it takes to prepare the boat. I also know that even if we sail alone, behind me, there is a group of people to support me. So I intend to devote time, attention and energy to them so that whatever happens, this adventure is a collective victory. There are only 18 months left to be on the starting line, so I’m already in the race.

What do you think will be the biggest challenge?

Certainly sailing in the southern oceans and the roaring fiftieths, but also overcoming loneliness and holding on to for such a long time. Finally, especially coming back whatever happens with a beautiful story to share.

Tell us about your boat or the boat you would like to have.

I just acquired a Solaire 34 built by Jacques Riguidel. It is a boat built in an eco-smart way. I like the idea of giving a second life to the things that people have made. I will not go as far as to recycle a telegraph pole to make a mast, but I will reuse as much equipment as I can and try to promote the best green technologies, so that our ocean remains as blue as possible.

Do you intend to link your personal challenge to a social cause?

Yes, I would love to! My boat is called Solarwin and I would like to bring together partners who are taking concrete action to ensure that the future of our little blue planet is not jeopardised by man’s madness.

Is there anything else you would like to add?

Given the list of Skippers already registered, I think this race is already exciting.

For more information on the Global Solo Challenge, see: https://globalsolochallenge.com/