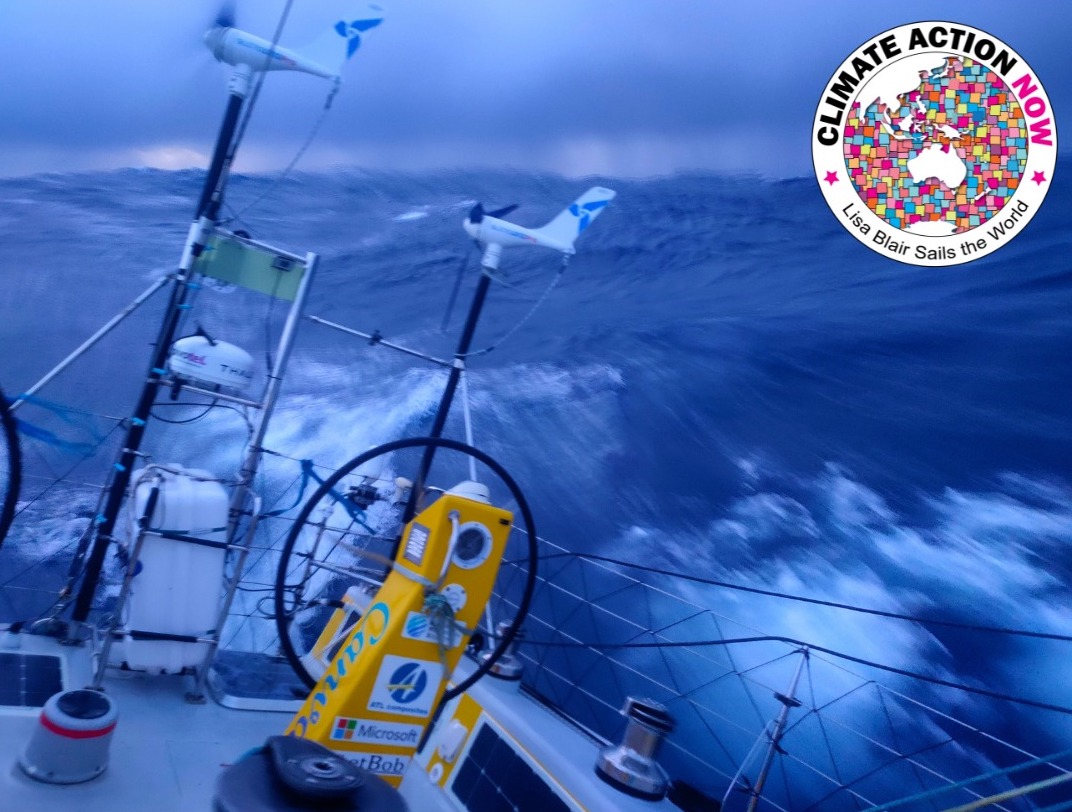 Plenty of squalls in the Southern Ocean. Pic - LB

In her latest blog post, the countdown is on for Climate Action Now’s rounding of the Mount Everest of sailing – Cape Horn.

MetBob has supplied another animation of the weather leading up to my approach to Cape Horn.

Well again this morning I didn’t manage to get to bed until just after 9am after being awake all night so I decided to make today a bit of a rest day and sleep as much as I possibly could.
Hi all,

Well again this morning I didn’t manage to get to bed until just after 9am after being awake all night so I decided to make today a bit of a rest day and sleep as much as I possibly could.

As I was just starting to think about getting to bed the winds eased a little and I was left trying to decide if I should shake a reef in the main sail or not. I was sailing with three reefs in the mainsail and the storm Jib, but the winds had quite rapidly eased from a steady 35 knots to almost holding 20-25 knots, but as I would watch the instruments the winds would once again jump back up to 35 knots.

After watching the winds for over an hour I finally decided to go with my gut and leave the sails as they were. I really wanted to push so get to Cape Horn a little quicker but I knew that there was another front on its way. I really didn’t want to risk breaking the sails this close to Cape Horn, it really isn’t a great place to run repairs. I opted to sail slightly slower and have a greater margin for error. Plus, I might actually get some sleep.

I did manage a stint of five hours (with some deck checks) before I got up and once again had a look at shaking out that reef. After another look at the clouds around I decided against it. It looked like my increase in winds wasn’t too far away judging from the dark band of clouds with filled with rain. I went back to bed and managed to sleep on and off until 7pm before getting up and making breakfast for dinner and then changing over the micro plastic filter.

My new winds had now arrived and I was getting 40 knots as often as I was getting 30 knots, so life aboard became a little lively. We bounced around and occasionally shot off like an arrow while we surfed yet another wave at 25 knots.

We were rolling a lot in the swell, which makes things even like sitting, difficult. I must be braced all the time, and there didn’t seem to be any predictability in the movements. Normally the ocean has a rhythm and when you are out here sailing long enough you get to learn the patterns and things like adjusting for the tilt of the boat as the wave passes below can become like second nature, not something that you need to think about.

I become so in-sync with the boat and the ocean that I find myself correcting before we have even started to roll. Today it was more like we were getting shoved left and right and so I needed to take care moving around the boat and make sure I hung on.

Cape Horn is now just over 577 nm away as the crow flies. I hope to be rounding it in three days.  This part of the journey is a massive one as it is where I identify the most ‘known’ risk of the voyage. Cape Horn is considered the Mount Everest of sailing and is one of the pinnacles of any sailor’s career is to sail past the Horn. It has such a reputation because it is a very dangerous section of our ocean and has claimed many lives and ended many records in the past.

It is dangerous for several reasons: in the Southern Ocean we have this storm belt where storm after storm roll around the bottom of the planet. They don’t encounter land anywhere except at Cape Horn. These storms often span over 1000 nm wide and they need to compress and funnel through the gap between the Antarctic Peninsula and the South American coast. That gap is the Drake Passage and is roughly 500 nm wide.

So, all the wind and waves that have been formed while the storm travelled around the whole of the world, suddenly need to go through that gap. If you get wind against current, then it exaggerates the conditions further. On top of this you have the continental shelf of South America and the depth of the sea changes from 5000 meters (five kilometres) deep to 30 meters deep. Imagine what that would do to the wave formation in an eight-meter swell.

Then, along with all of this, you can also get Katabatic winds. Basically, the mountains off Chile and Patagonia are so high that they develop their own winds. As the air cools and sinks it gets pulled down the mountain by gravity gaining speed and momentum as it falls. These katabatic winds can be so violent that out of nowhere you can be hit with 100kn winds, and all your sails get shredded.

So it is deservingly called the Mount Everest of sailing. I am going to be rounding it in three days. For me the wave formation will be the biggest concern as I cross over onto the continental shelf.  I am watching the forecast closely as it is changing almost daily.  Tomorrow, I have eight-meter swells due, but things will have eased off a little before my approaches to Cape Horn… hopefully.

Last time I sailed around Cape Horn in the previous 2017 record, I was racing what I had dubbed the ‘Mother of all Storms’. It was this huge system, and I spent two days battling to keep Climate Action Now afloat in the extremely dangerous seas at the time.  Here is the blog from that year if you are interested in reading – 2017 Blog Rounding Cape Horn.

So with anticipation in the air and the large seas due tomorrow I felt it was time to update the food stores. I grabbed another food bag and started to unpack it only to find that the bottle of cordial in the bottom had been crushed and leaked throughout the bag.

It seems like several of the freeze-dried meals might be throw-aways as there packaging is all soggy.  I have washed and dried them and hope that the contents inside are still good.  I have more than enough food, so if I need to throw them then I will.  I don’t like wasting things out here because you never really know what you might need next.

So now with the winds up at the 40 knots range and the max gust so far being 47 knots I feel it is time to climb into my bunk and try for a little more of that elusive sleep. Before I go I would like to take the opportunity to thank the follow degree sponsors.

082 West – Indi ED School Reimagined (USA) – Huge thank you to the class of Rachel Pethe.Thank you to students Sarah, Amaya, Sebastian, Nina, Frankie, Anna, James, Jimmy, Laura, Eloisa, Gracie, Leila, Grace and Rowan. I clearly remember sharing my story with your class by zoom, so thank you so much for your support of my record and the science I am undertaking. I have no doubt Rachel will arrange for me to speak with you all again when I return.