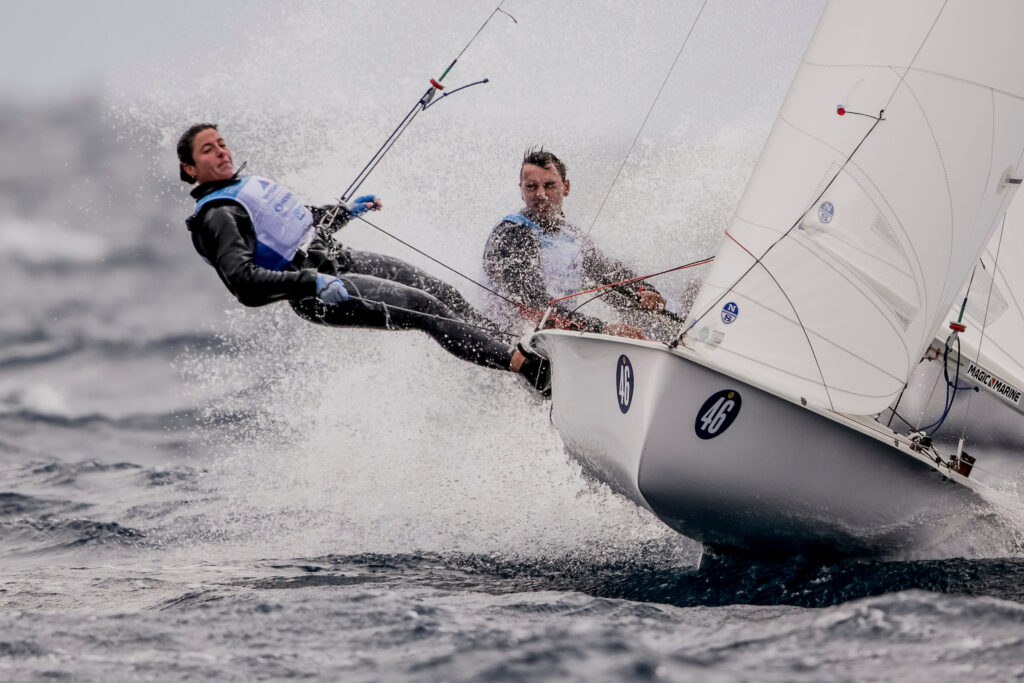 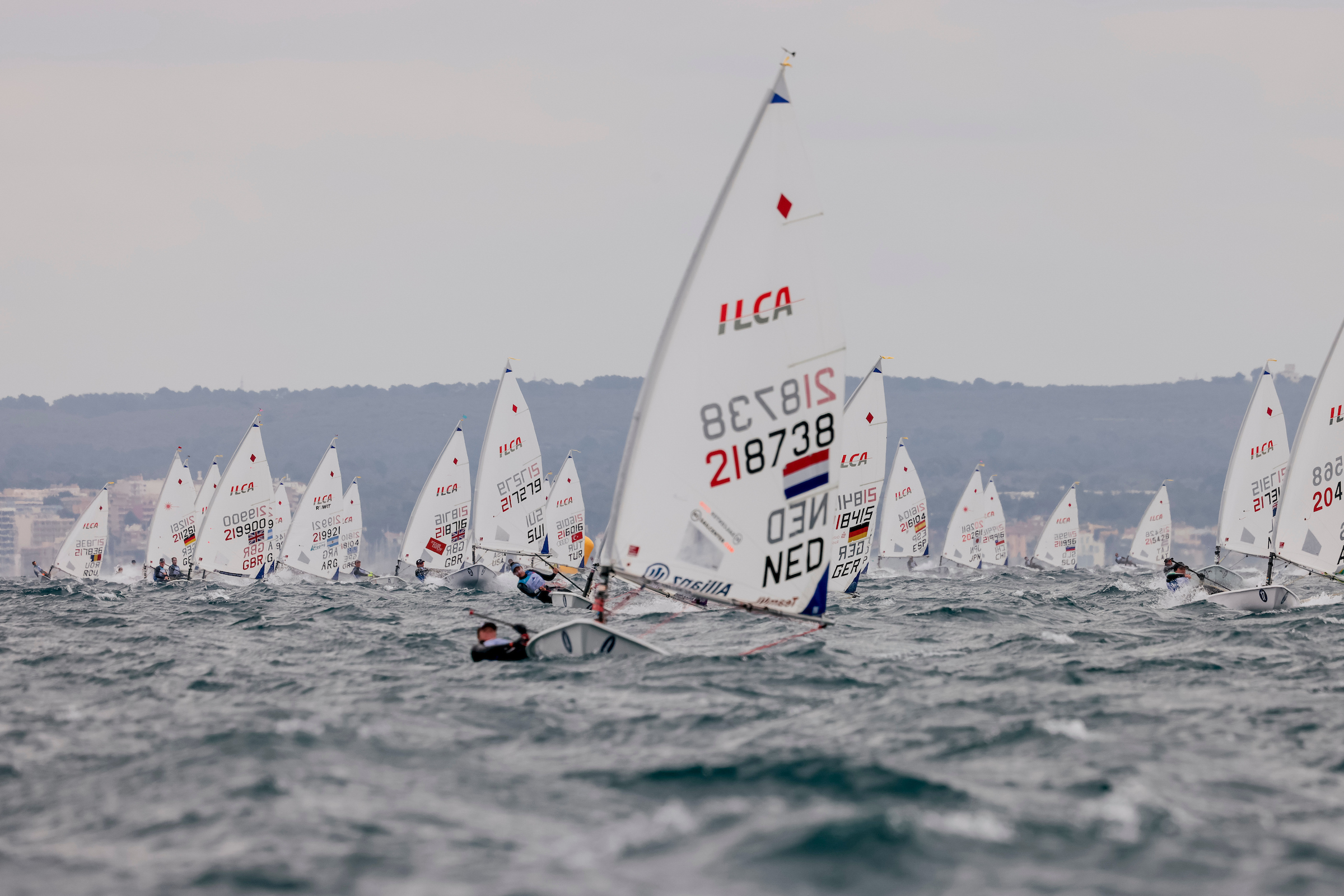 In every respect other than the air temperature, there was a baptism of fire on the Bay of Palma when three new classes contested their first races in the Olympic classes arena at the 51 Trofeo Sofia Mallorca today.

Strong, gusty offshore breezes pumped up to well over 25kts at times to provide a stiff test for the debuting iQFOiL men’s and women’s foiling windsurfing classes and the mixed 470 dinghy class.

Britain’s powerfully built Sam Sills revelled in his preferred windy conditions in the Men’s iQFOiL fleet. A past double world champion as a youth windsurfer and an accomplished former RS:X racer who has been competing at the Sofia for ten years, Sills banged in two opening wins in his 50 strong fleet before jumping the start gun to land a UFD disqualification which he immediately atoned for with his third winning gun.

With Finn Hawkins in second and Andrew Brown third, Sills leads a GBR monopoly of the top three places proving the benefit of the squad’s extended training period in Lanzarote and two good weeks practice on the Mallorcan regatta waters.

“There is a long, long way to go to the finish line but that is a good way to start. You never quite know what to expect at the start of a season. But days like these when it is so windy and so gusty you just try to hang on and sail my best,” Sills said.

“But that is as good as I have started a regatta for a long, long time. And it is great to be here in the Olympic arena with the iQFOiL. The RS:X was fun but it was very hard, this is hard but it is more fun. The competition is tight and everyone is pushing, the standard goes up every event. It makes it very interesting with the slalom starts as the guys from the PWA (Professional Windsurfing Association) Tour are probably better starters.

“But I have practised the starts a lot. The one that was over was a learning point and this stage of this event it is good to be trying different starting techniques and so I won’t be trying that one again,” Sills added.

In the Women’s iQFOiL France’s double European champion Hélène Noesmoen made the best start, conditions today being more reminiscent of her native Les Sables d’Olonne on the French Atlantic coast than the Mediterranean.

The tough conditions were an acid test for the freshly formed mixed doubles partnerships in the 470 dinghy. The challenge of keeping the boat upright left little time to fine tune manoeuvres and communication. Spain’s Olympic 470 bronze medal winning helm Jordi Xammar is now sailing with Nora Brugman. Somehow they battled through to first and second places in their two heats. This puts them in equal first overall with the Italians in the other qualifying group, Giacomo Ferrari and Bianca Caruso.

“We were out of control today,” grinned Xammar, who has just flown back from skippering the Spanish F50 foiling catamaran in the season finale of SailGP in San Francisco. “I’ve spent the past two weeks feeling out of control 100 per cent of the time, so I think that actually helped me deal with that feeling of being out of control in the 470 today.”

Xammar admitted he had made a promise to himself before leaving the beach that he wouldn’t try anything to dramatic. “We were trying not to do stupid mistakes and trying to be smart, and maybe we were a bit too conservative, but we are happy with our day.”

In the ILCA 7 men’s fleet Cyprus Pavlos Kontides, the 2012 Olympic Silver medallist, posted two wins to lead ahead of GBR’s Michael Beckett and Germany’s Philipp Buhl who both sailed to a second and a first in their respective qualifying fleets.

The 115 foiling Formula Kite riders make their debut on the Olympic classes stage on Tuesday on the Bay of Palma at the 51Trofeo Sofia Mallorca. In itself the sheer magnitude of a regatta of 1000 athletes from 62 nations and ten classes sailing on eight course areas is something of a culture shock.

And for many free-spirited souls the step into the Olympic arena at this first Hempel Sailing World Cup Series regatta of 2022 is a first warning of the dedication, focus and discipline that will be required to land a medal in Marseille in 2024.

“Usually with our own events we have 100 or so riders so the scale of the organisation here is amazing,” enthuses Antoine Weiss, the Youth Coach for a well organised, well-resourced French national team which had three male athletes in the top four and women placing third and fourth at the 2021 Formula Kite World Championships. “ In fact as we build up to the Olympics this is a good first warm up, a chance for the athletes to get a feeling for a really big event like this. They get a better idea for what they have to do. They start to understand this thing. And now, here, it feels real.

“And from here they will be more focused and give more energy to the programmes. Now if you don’t train properly you just won’t succeed. The top 10 level in both fleets is very hard to get into. For the moment there are 20 or 30 girls at this top level but for the men right now even to get into the top 50 is difficult.”

Naturally the French are determined to transform their current dominance to actual medals at their home waters Olympics in a little over two years time. Weiss notes: “We started kite foiling early and we have a lot of racers and the Federation give good support to the riders.”

But he cautions, “Marseille is very specific with the Mistral especially. There is no beach. The Mistral is more onshore and very gusty. In the thermal sea breeze it is easy. And right now it is hard to train there as well. We tend to train at Hyeres and Montpellier.”

Short, sharp high speed races – typically 12 minutes long – leave no room for errors. The schedule in Palma is for four races each day. After two days of qualifying the top 14 athletes go forwards to the Finals, the top two qualifiers progress directly to Saturday’s four riders six to nine minutes long Medal race where they will be joined by the winners of each of the six strong semi-finals.

Competitors sign in four kites for the regatta – from any one of the five different IKA approved brands. The four licenced brands each have between eight and ten kites ranging from 7m and 25m to choose from. During the regatta competitors can change at any time when a flag is shown. As soon as it is shown the competitors come back to the beach to change. There are 10 different licenced foil manufacturers of which two – one German, one Italian – are prevalent.

Here they sail classical upwind-downwinds, going upwind to the first buoy where they turn out to reach across to another upwind-downwind (an outer loop or trapezoid) while the Final is a shorter standard windward leeward. The target time for the qualification races is 12 minutes and six to nine minutes for the final.

For the full results, see: https://www.trofeoprincesasofia.org/en/default/races/race-resultsall