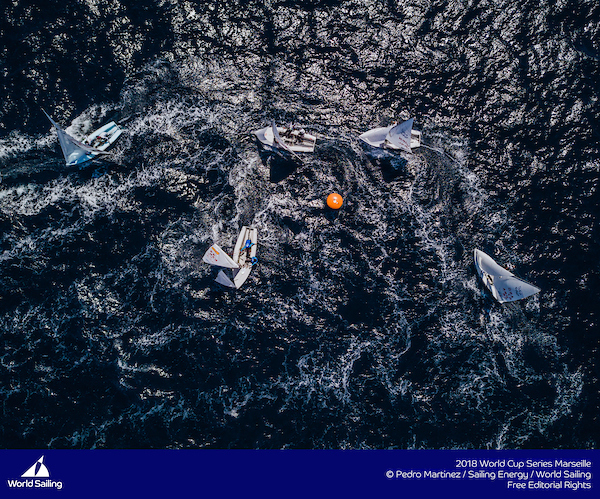 The final day of competition was plagued with a light breeze that never truly settled from a consistent direction, ensuring both the competitors and race management teams were tested to the maximum.

The Laser, Laser Radial, Finn and Men's 470 all completed their Medal Races but the Women's 470 fleet could not start before the cut-off time, ensuring the results from the previous day stood.

The day began with a dramatic photo finish in the Laser that decided the gold.

There was minimal separation heading into the Medal Race and it was who beat who between Hermann Tomasgaard (NOR) and Philipp Buhl (GER), with Great Britain's Elliot Hanson in with an outside shot of gold.

“We were all close on points, so whoever had the best race would be top,” commented Buhl.

The pendulum swung back and forth in the race and as Hanson took an early lead, gold was heading his way. The Norwegian and German racers managed to advance and close the gap on Hanson as the momentum swung their way.

Hanson held through to the finish to take the race win but the battle for gold was between Buhl and Tomasgaard. Tomasgaard led Buhl on the final downwind and at the final mark, on the reach to the finish, it looked like the Norwegian had done enough to clinch it. But Buhl did not surrender and pushed all the way to the end as the sailors finished within millimetres of each other.

The tracking had given the victory to Buhl so those watching around the world knew the result but out on the water, they faced an anxious wait for the official results.

As the scoreboard was held up, Buhl was adjudged to have finished ahead of Tomasgaard to steal the gold away from the Norwegians grasp.

“I had a good feeling that I won but no one was certain,” commented Buhl.

“My strategy was to get ahead early and have a look at the others but that didn't work out so I had to switch to plan B, which was to just catch up until the last metre. In the end, it came down to the last wave to the finish line.

“Me and Hermann are training partners so sharing a podium spot with him is special.”
Hanson's race win ensured he retained third overall and bronze.

Emma Plasschaert (BEL) held a 16-point advantage over Maria Erdi (HUN) leading up to the Medal Race. Gold was hers to lose and she engaged in a match race with Erdi at the start to keep her nearest rival at bay.

Plasschaert managed to hold up Erdi at the start but the Hungarian escaped, heading to the right of the race course where she was able to find a stronger breeze, handing her the lead at the top mark.

The Belgian racer remained in the middle of the pack and looked relatively unscathed by Erdi's assault at the front of the fleet.

As the race unfolded, Erdi dropped back to second as Tatiana Drozdovskaya (BLR) took control before eventually winning the race. Erdi followed and Plasschaert's seventh was enough to give her a comfortable victory.

“It was a good match race between me and Maria. I gave it a shot but I failed,” said the Belgian. “After that fail, I just tried to keep as little boats between us as possible.

“It was my first big win in the senior fleet and to race in the Paris 2024 Olympic Sailing venue is special,” expressed Plasschaert. “I'm just so happy with my win here in Marseille and it gives me good spirits for the Worlds in Aarhus this August.”

Any one of five racers could claim gold in the Finn but realistically, the battle would always be between Jorge Zarif (BRA) and Josh Junior (NZL), who topped the leaderboard on 32 and 33 points respectively. They had an advantage over Alican Kaynar (TUR) in third on 39 points, Andy Maloney (NZL) on 41 and Jonathan Lobert (FRA) on 47.

Zarif did not get off to a good start in the Medal Race, getting held up in the middle of the pack behind his main rivals. He tacked away to the right of the course as his rivals stayed left and, fortunately for the Brazilian, it paid dividends as he grabbed the lead and never surrendered it to clinch a deserved gold.

“It feels amazing,” said the two-time Brazilian Olympian. “I won in Hyeres too, so it's a great feeling. I have kept the yellow jersey on for four or five days which is unique. It's like having a target on your back and everyone is trying to shoot it.”

Junior finished well down the pack in ninth place but held on to silver. Maloney edged Kaynar by a boat length at the finish to pick up Bronze.

Belcher and Ryan had a comfortable advantage at the top of the Men's 470 fleet ahead of the Medal Race and knew exactly what they had to do, “Today we just had to keep tabs on the guys in second and third. We had seven points on second and a few more to the guys in third.”

The Medal Race was full of wind shifts and unstable conditions but Belcher and Ryan maintained their focus, sailing through in second to seal their fourth World Cup title.

Jordi Xammar and Nicolas Rodriguez (ESP) held on to silver and Keiju Okada and Jumpei Hokazono (JPN) rounded off the podium.

After a series of delays and an abandoned start, the Women's 470 fleet were unable to sail their Medal Race.

The results from the night prior stood, handing Mills and McIntyre a successful defence of the title they claimed just 12 months ago. Silvia Mas and Patricia Cantero (ESP) took silver and Italy's Elena Berta and Bianca Caruso completed the podium.

“This time last year it was a try out and I felt I lot of pressure to perform well with Hannah,” said McIntyre.

“This year it's been different because we are learning and trying to get better. I'm looking forward to the rest of the year.”

As the dust starts to settle on the 2018 World Cup Series, the competitors are now looking ahead to the Hempel Sailing World Championships Aarhus 2018 this August.

The World Championships is the principle qualification event for the Tokyo 2020 Olympic Sailing Competition and upwards of 1,500 racers are expected to sail in the Danish city.