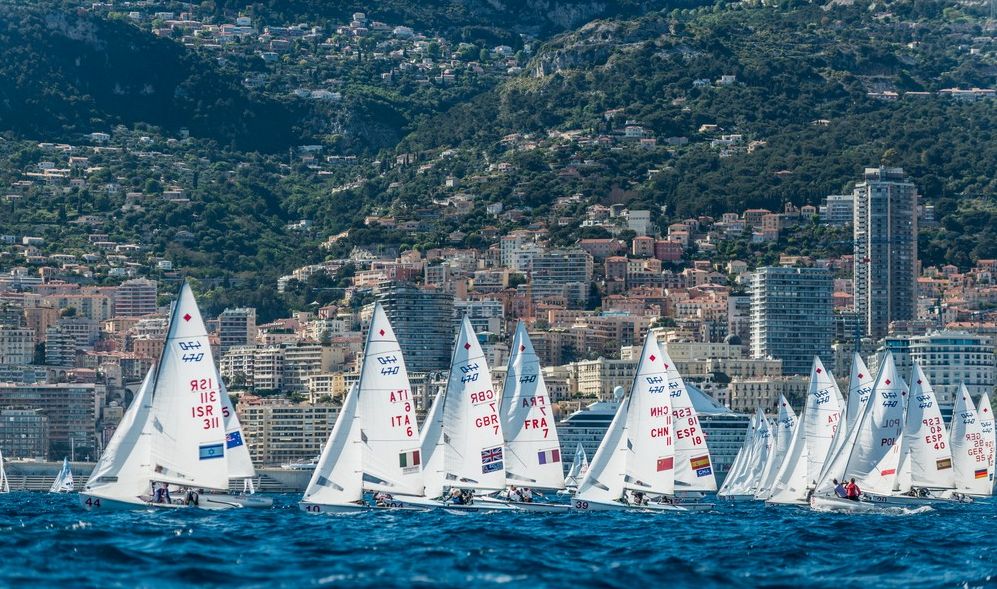 With Monte Carlo as a back drop, racing kicked off soon after 1625 hours in light breeze conditions of around 8 knots, increasing later. The 470 Women fleet are racing a single series and contested two races today, with three races for 470 men who are split into yellow and blue fleets for the qualification series.

The usual leaderboard hierarchy in the 470 Men fleet, featuring race wins to the renowned Mat Belcher/Will Ryan and world #1 pairing of Carl-Fredrik Fock/Marcus Dackhammar. Over in the 470 women, the race winners suffered a bitter sweet day in each of their other races, leaving room for consistency to reward Portugal’s Mafalda Pires De Lima/Mariana Lobato at the top of the leaderboard.

470 WOMEN
Competing at their first ever 470 Championship, and after only two months in the boat together, Mafalda Pires De Lima/Mariana Lobato surprised themselves with their form, taking the lead from a consistent 4,6 scorecard. No pressure of expectation has clearly enabled this pair to shine.

“We didn’t expect this,” said Lobato, a London 2012 Olympian in the women’s match racing event, and the 2013 Women’s Match Racing World Champion. “We will try to sail fast and smart,” she continued in expectation of the races ahead.

The glory of leading the women’s opening race from start to finish went to Rio 2016 Olympians Barbara Cornudella/Sara Lopez from Spain. They took the advantage off the start line, holding the rest of the fleet behind them to claim what is their first ever race win at a 470 European Championship.  A follow-up result of 16th in race 2, gives them 6th overall on the leaderboard.

“It was a good race for us, we did a good start, so we were happy with that one,” explained Lopez. “We are really proud of our win. The start in race 2 was more or less ok, but then there was more wind and we couldn’t go as fast as we wanted.”

Race 2 victory went to Great Britain’s Amy Seabright/Anna Carpenter, who came off the pin end of the start line, went as fast as they could and it worked. They sit one point off the Portuguese series leaders, with France’s Jennifer Poret/Camille Hautefaye in third.

The world #1 partnership of Afrodite Zegers/Anneloes van Veen did not have their game exactly where they wanted it, with finishes of 11,8 positioning  them in 10th overall. A re-group tonight, and undoubtedly we will see them up front tomorrow.

Two races are scheduled for the 470 Women Tuesday 9 May, with their first start at 1200 hours.

470 MEN
Mat Belcher/Will Ryan were the last team to leave the boat park this morning, whilst the rest of the fleet were well on their way to the race track. A strategy perhaps; last to leave first to get to the finish? If so, it worked. They picked up back to back wins in blue fleet races 1 and 2, rounding off their day with an 11th in race 3. The series discard comes in play after 3 races, so the Aussies hold the lead by 2 points.

In the men’s yellow fleet, the world #1 pairing of Carl-Fredrik Fock/Marcus Dackhammar are second overall, having matched the Aussies with a win in the opening race, followed by a 2,5.

Battling around the track with the 470 Class maestros were the young Italian partnership of Giaomo Ferrrari/Giulo Calabro, scoring a 3,2,9 to end their day in third overall. Reigning 470 Junior European Championships, they are taking every opportunity to pace their heroes and learn from the best.

Ferrari commented, “It was a good day. The first race we came third and in the second race we were first round the first two marks,” notably with Belcher/Ryan behind them. “But then the Australians passed us in the second upwind.

“We are only at the start of the Championship, so step by step. We started 470 in 2014, but we are only 20 years old and very young, and the other sailors have a lot of experience. We want to continue to learn from these sailors,” Ferrari concluded.

Impressive form too from Malaysia’s young pairing of Faizal Norizan/Syukri Aziz who had their moment inside the top ten today. Well up with the leaders in race 1, they edged into 3rd, before settling for a 4th place finish, to sit in 16th overall from scores of 4,20,9. Eight years ago, Norizan claimed the silver medal at the 2009 Optimist Worlds, and his upwards trajectory has continued. The team made three appearances in the 420 fleet at the Youth Sailing World Championships, crowning their 420 career with a silver in 2014. Monaco marks their first ever 470 Championship.

Two races for the 470 Men on Tuesday 9 May will wrap up the qualification series, and decide the top 25 teams who will advance to gold fleet racing and a shot at the podium. The rest of the fleet will battle it out in the silver fleet.