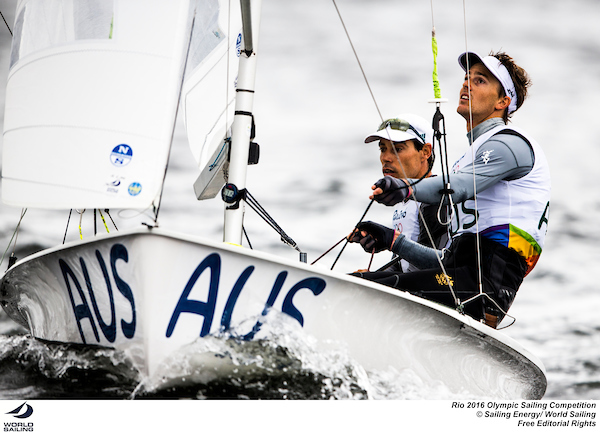 Mat Belcher and Will Ryan are very careful sailors who know exactly what is required to win at a major regatta. And today they knew there was no percentage in trying to chase down the flying Croatians. What was required was survival and two low scores.

Facing massive swells which they estimated to be over 3 metres in height, accompanied by winds of well over 20 knots and a contrary current, Will Ryan described being taken out by a couple of waves while on the wire.

The Croatians added a second win to their tally today but also had a fourth place, leaving them on four points after their discard. Belcher and Ryan have one win from yesterday and scored two thirds today after leading at various times during both races.

“It was all about getting through the first part days in good shape,” said Belcher. We're here to win and we expect to see the top guys getting good results. We're happy with how we came away today.”

Down in sixth, British helm Luke Patience again entertained the media in the mixed zone by describing how he saw a sailing boot floating past. “It was so funny. Someone had obviously had a wipeout. So funny!”

On a more serious note he agreed that the conditions were marginal for sailing. When asked if he had seen bigger waves he said of these ones, “They're up there.”

His approach was similar to Belchers in that it was “nothing too heroic but not passive either”.

These are very experienced crews handling very difficult conditons very well. There is plenty of sailing still to be done with six qualifiers and the medal race, but already the cream is rising to the top.